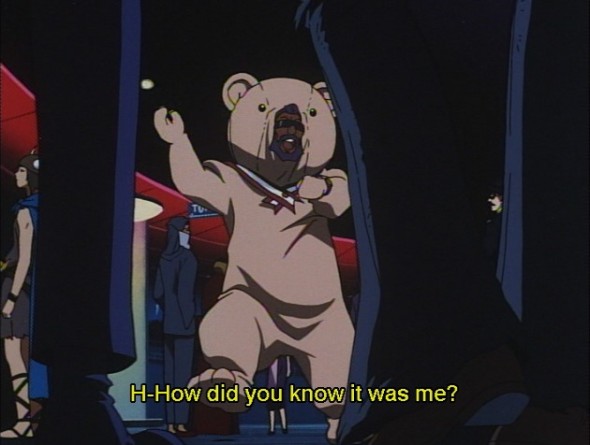 Teddy Bomber at the costume party. Nothing to do with this section of the post, just a fun image.

Cowboy Bebop and the Ars Moriendi

(Some familiarity with the last two posts in this series is assumed.)  Death has come up a lot in these recent episodes.  “Wild Horses” has Spike resigning himself to death and offering Jet his hidden bottle of whiskey.  Pierrot got stomped by that parade.  Pao gets one of the more moving death sequences in the series in “Boogie Woogie Feng Shui.”  There are also been some figurative deaths:  Doohan wrecking the antique spaceship he spent his life rebuilding, Andy saying goodbye to his cowboy persona, and Teddy Bomber getting dragged off to prison.  Of course, death has always been part of Cowboy Bebop‘s palette – I seem to remember that the very first episode ended pretty badly for a couple of characters – but I do think it’s being used more often now, or at least more thoughtfully.  And I think it’s because there are so few episodes left.  The end of a show is another kind of death, after all.  Of course it’s certainly possible that nothing’s changed:  that I’m just noticing the death references more because I myself am hyper-aware of just how few episodes remain.  But for the sake of the argument, let’s assume that it was intentional on their part, in which case the various deaths on the show are probably in some way reflective of the death of the show.

Particularly interesting here is the question of what constitutes a “good death.”  This is a concept with major roots in both Japanese and Euro-American culture.  You can see it in Plato, and in Kabuki theater, and in the medieval/renaissance tradition of Ars Moriendi literature.  I’m no expert on any of these topics, but from what little I do know there’s a remarkable degree of consensus about the right way to die.  To wit:

1) Don’t live in denial:  understand that you will die, and prepare for it.

2) Do not fear death.  After all, it happens to everyone.  So it’s not that bad. (And maybe there’s a reward! Traditions with a heaven tend to bring that up here.)

3) Die as you lived.  That is, don’t abandon any of your deeply held convictions – i.e. religious faith, political allegiance, or whatever – in an attempt to stave off the inevitable.

4) Perhaps most importantly, don’t whine about it.  If you do, you’ll make it harder for your friends and family to do #1-#3 when their turn rolls around.  If possible, you may want to make your last words an exhortation of religious faith… or if that’s not really how your culture works, crack jokes.

Of course, in modern American society, it works a little differently.  We’d want to add

5) If at all possible, make your death a heroic sacrifice.  Like, be a fireman who dies saving babies from a burning building.  Ideally, you should try to die from wounds sustained while throwing Emperor Palpatine into a ventilation shaft. I mean, that’s a pretty good death, guys.

But it only works a little differently.  #5 is a nice bonus, but #1-#4 are still required.  How awesome would Darth Vader’s death scene really be if, after his heroic sacrifice, he spent his last few moments screaming “The force lightning! It BUUUURNS!  This is the worst pain IMAGINABLE!! Luke, would you stop sitting there like a nerf herder and get your old man some freaking MORPHINE?!”

Now let’s apply this to the deaths in Cowboy Bebop.  Who dies well?  What does this imply?  Well Pierrot fails dying, hard.  He’s wailing at the top of his lungs (4) and he never sees the parade coming (1).  This is consistent with Pierrot having pretty much, like, the most horrible life imaginable.  But most of the rest acquit themselves pretty well.  Spike doesn’t complain when he thinks he’s going to die, and Doohan doesn’t hesitate before tossing his life’s work away (2).  In both these cases, you get the feeling that (1) while neither of them were necessarily expecting the hammer to drop on this particular day, Doohan knew that in an emergency he’d have to get the Columbia airborne, which would end up destroying it, and Spike knew that bounty hunting is a dangerous job that would end up killing him eventually.  And they’d both (4) made their peace with this circumstance.  Furthermore, neither of them shied away from their chosen course of action.  Doohan could have only worked on the Columbia’s exterior, making it a museum piece that would never fly, and therefore never be destroyed.  He also could have gutted it and turned the interior into a modern spaceship, making it into something that could fly without being destroyed.  But if he did either of these things, he wouldn’t be Doohan… and eventually, something would have destroyed his life’s work no matter what he did.  (Pace Kanye West, nothing lasts forever-ever.)  By the same token, Spike could settle down and get a job teaching Karate somewhere… but he’d still die, eventually.  So he might as well do what he loves.  Actually, it’s pretty clear from the series taken as a whole that what drives Spike to bounty hunting in the first place is his massive death wish.  We’ll pick that up in another post.

But it’s Pao’s death in “Boogie Woogie Feng Shui” that really makes the Ars Moriendi relevant to this discussion.  Here we need to take a little detour into the show’s jazzed up concept of feng shui.  As I understand it — which is to say, “as the wikipedia article on feng shui understands it,” — feng shui is a way to design and situate buildings, roads, and other structures in order to attract good energy and ward off bad energy.  Cowboy Bebop’s “Universal Feng Shui” allows its practitioners to use these techniques to literally see and even change the future.  It’s the difference between “set up my store to attract more customers” and “get Bill Gates to hand me a million dollars.”  We’re given to understand that Pao – a grandmaster of the style – was able to use it to drag Jet and Mei Fa across the solar system, all while he was trapped in a hyperspace rift.  Even Mei Fa seems to be able to use it to get away from the gangsters that are chasing her.  (It’s not that she’s luckier than any other adventure hero – like I said, plenty of buses drove by just in time for Tintin to jump down onto them.  It’s just that, for once, the character’s luck has an in-world explanation!)  Yes, the show equivocates on this a bit.  Jet gives a nice “it wasn’t your magic that brought her here, it was her plucky can-do attitude!” speech, right at the end.  But in the final analysis, the sheer weight of contrivance burdening the episode’s plot winds up favoring Pao’s explanation.  Sure, Mei Fa seems like a nice young lady.  But her showing up in that place, at that time, with exactly the right people to help her unlock the Sunstone, is an astonishingly random coincidence if you don’t think there’s some kind of magic at work.

The question then, is this:  why does Pao die?

Theoretically, he could have used his power to do any number of things after he got in trouble with the syndicates.  He probably could have arranged to disappear entirely, living peacefully on some half-deserted rock for the rest of his days.  (Maybe Doohan needs a roomate?)  Maybe he could have brought the syndicate down, or reconcile with them… who knows.  What he chose to do, instead, was have one last conversation with his estranged daughter.  There are basically two possible interpretations of this, both of which have some value as we proceed into the final dvd’s worth of episodes.

The first is to assume that, with all Pao’s godlike power, this was still the best he could do.  That the syndicates are just… that… bad, and the only thing you can possibly hope to do if you wind up in their crosshairs is to say goodbye to your loved ones.  And this is indeed consistent with everything we’ve learned about the syndicates so far over the course of the series.  But I like the second possibility better.

The second possibility is actually kind of exactly the same as the first, except it is Death, not the syndicate, that Pao is struggling with, and Death that he could not defeat.  Say he could fly off and live on a rock somewhere:  to what purpose?  He would still one day die.  Say he could bring the syndicate down, or reconcile with them, so that they would no longer threaten his life.  Would he then live forever?

Having accepted that he would die, and no longer fearing death, his only remaining concern is to live a life that he’s proud of — which means reconciling with his daughter — and to inspire his loved ones (i.e. the daughter again) to face the test with bravery when their own time comes.  And in this, Pao is successful.  The closing sequence of the episode shows Mei leaving the luopan on her father’s tombstone. (This by the way, is scored with the lilting guitar piece that serves as Cowboy Bebop‘s standard “redemption” and “happy ending” music.) She is no longer trying to predict the future, which means she is no longer trying to fight fate.  And when death comes, she will be ready — but in the meantime, a full long life.

Jet is changed by Pao’s last actions too.  As we learn in the closing voiceover, he has “stopped reading the horoscopes,” which implies a similar embrace of the inevitable.  And this will motivate a crucially important change in his behavior in the very last episode of the series, “The Real Folk Blues.”  But on this more later.