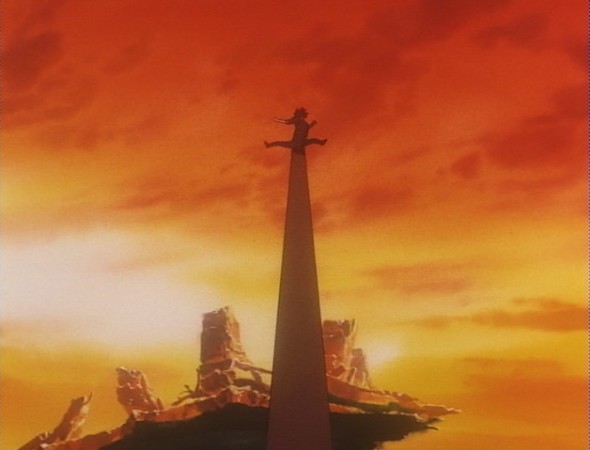 Andy’s fighting style is an expression of his entire character:  he’s just like Spike, but without the cool.  Spike’s persona is based on the heroes of film noir, who are basically the coolest people in existence. What’s more, we are given to understand that this is not because he wants to act cool, but because it’s an expression of his truest self.  Andy, on the other hand, acts like a cowboy, and not the cool, Clint Eastwood cowboy, but the lame Tom Mix kind of cowboy.  (I eagerly await the hate mail of the internet’s only remaining Tom Mix fanboy.  Bring it on, old-timer.)  Furthermore, this is clearly and specifically revealed to us as a pose:  he dresses up as a cowboy because he thinks cowboys are totally awesome!  The interesting thing here?  If you’re going to map good, bad, and ugly onto the main protagonists of “Cowboy Funk,” well… it’s a little tricky.  Teddy Bomber is Eli Wallach.  No surprises there.  But if pressed, I’d have to say that Andy is probably the good, and Spike is probably the bad.

Andy is always polite and friendly (though he swears like a Cowboy too – in English – if you listen to the original Japanese soundtrack).  Spike is a petulant grump, especially in this episode.  Andy is fabulously wealthy.  Spike is poor (and while poor is cool, it’s not something we ever really want to be).  Spike never has enough food.  Andy has his own line of canned soup, a corn-chowder looking concoction called Son-of-a-Gun Stew, which apparently has made him even fabulously wealthier — uh, even more fabulously wealthy.  Faye brings a case of this home after spending a night at Andy’s place — we’re not totally cued in on what happened, but it seems like she considered taking him on as a sugar daddy, and then split because he was too annoying, or reminded her too much of Spike (who she secretly loves), or annoyed her in the same way that Spike annoyed her, or something. 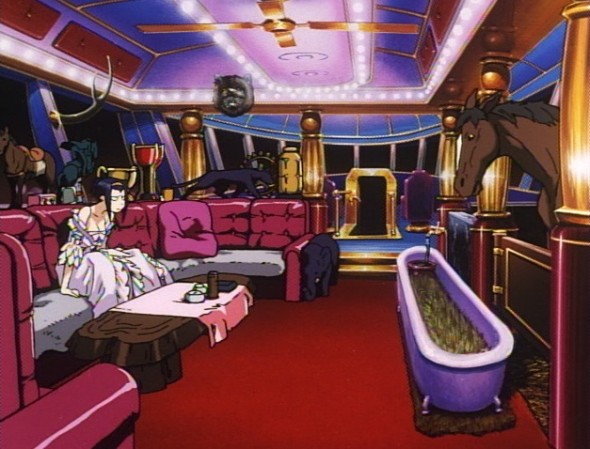 Or possibly because he has the worst taste in furnishings of any human being in the history of time.

There are a few interesting things going on in this episode.  One is the way that Andy stands in for the good old U.S. of A., with Spike presumably standing in for Japan.  I guess this is how the world sees us… maybe they hate us not so much for our freedoms as for our stupidities.  Another connects back to episodes 19 and 20:  like these, “Cowboy Funk” also does something interesting with the activation and resolution of mysteries.  Right at the beginning, when Andy flies through the window on his horse, he cuts of Teddy Bomber in the middle of his villainous monologue where he explains the motivation for his reign of terror.  Same deal for the second bombing, at the costume party.  At the third bombing, Teddy tries to explain himself, and then gets tired of being interrupted and tries to kill everybody.  But right at the end, he does get to give his speech – not to anyone that matters, but to a random prison guard and, crucially, the audience.  Since the writers apparently thought it was worth having him say it, I’ll give you the quote here (from the subtitled version – the dub tones down the Marxism ever so slightly):

Other than the awkwardness of “how a true pioneer should be,” this is interesting stuff, especially when you project it back on the episode you just watched.  What Andy had, and what Spike is revealed to have (at least here, although you could argue that his behavior in this episode is a little out-of-character), is basically badassery without philosophy.  They have incredible physical skills, but no reason for having those skills.  Their fights, like the colonization, the circulation of media, and the skyscrapers, are needless.  And neither one of them has much of a pioneer spirit:  Andy’s a poseur fanboy, and Spike is a jaded scene kid.  Of course, Teddy might not be much of a pioneer either.  Blowing up buildings ain’t exactly making a garden in the wilderness.  But it’s a pretty damning critique, the more so when you consider how much Andy can stand in for the whole aesthetic enterprise of Cowboy Bebop.  That is:  should we read him as American?  Or as someone messing around with the remnants of American pop culture, i.e. as the show runners themselves?  This gets doubly interesting when he shows up right at the end of Teddy Bomber’s speech (he tries to interrupt it again, in fact, but gets there a little too late), wearing a full Samurai outfit.  After all, he only promised Spike he would stop being a cowboy, not that he would stop doing… what it is that he does.  And then you remember that after Cowboy Bebop, Watanabe went on to make a similar series set in feudal Japan… 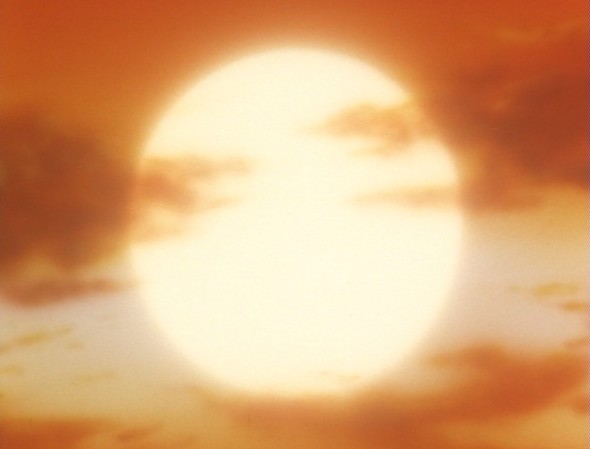 Here, this match-on-edit is taken directly from the show. Sun…