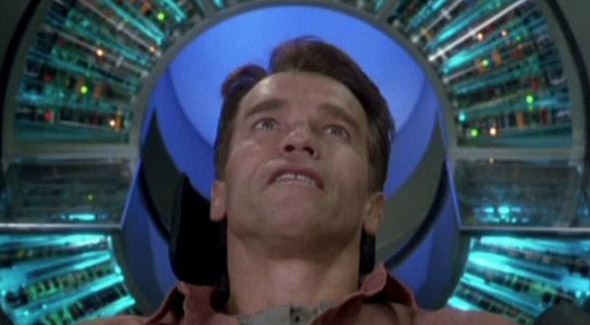 In case you needed a reminder, this man was once the Governor of California.

MELINA (overwhelmed): Quaid, I can’t believe it…It’s like a dream.

On hearing her words, Quaid’s expression turns grim and confused.

I just has a terrible thought…What is this is all a dream?

Then kiss me quick…before you wake up.

Those are the last lines from “Total Recall.” Since those words were uttered and the final credits rolled, fans have been debating their meaning: was the whole thing after Quaid sits down for his Rekall session just a dream? 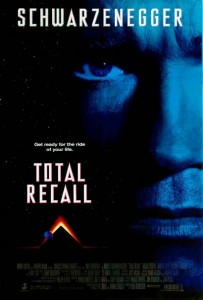 Not Quaid, Arnold. Though I would pay to hear him tell himself to “Get your ass to Sacramento!”

In the DVD commentary, both Arnold Schwarzenegger and Paul Verhoeven seem to come down on the side of “all a dream.”* The outlandish twisting nature of the plot does support that interpretation; the only way all of this could make sense is if this was all the product of Quaid’s fantasy and the Rekall-manufactured vacation gone wrong.

But that may just be a crutch that the filmmakers are using to excuse the parts of the movie that don’t make sense. Aliens on Mars? Oxygenating the atmosphere in 10 minutes? Cohaagen’s plan to turn Hauser into unwitting double-agent Quaid? Maybe Verhoeven and the screenwriters had wanted all of it to be passable as reality during the production process, but in retrospect saw that it all didn’t add up and have been trying to excuse any weaknesses in the plot by calling it “all a dream.”

I could go on with different points of argument from both sides of the argument, and you could find plenty of them yourself on various other websites, but none of those websites are us. Call me vain, but I think our site’s writers and commenters represent the internet’s best and brightest (and most entertaining) pop culture analysts, and as such, no one else is as qualified to settle this argument as us, the Overthinking It Community.

Settle down in a comfy chair. Review the script or rewatch the movie if you have to. Once you’ve made your decision, cast your vote and help us decide: In “Total Recall,” did the events depicted after Quaid’s Rekall procedure actually happen?

Notice there are only two choices in the poll. Now, I know that this movie was made with ambiguity in mind, but I don’t want anyone to have the cop-out option. Quaid either got his ass to Mars, or he didn’t. This isn’t Schrödinger‘s Ass on Mars we’re talking about here.

So do your analysis, cast your vote, and make your case in the comments! Remember, we’re solving this on behalf of the entire Internet and settling this debate for all time, so choose wisely!

P.S. While you’re doing your analysis, you may want some appropriate dream-related music to listen to. Enjoy:

Updated February 14, 2016: When I originally published this article in 2009, I hadn’t really thought about an end date for the poll. Since then, it’s racked up over 15,000 votes, and over the past few years, the results have stabilized at around 60% “No, never got his ass to Mars.” When you step back and think objectively about the evidence for and against, I understand why the majority of votes land in the “no” column, but ultimately, the greatness of the film lies in its ambiguous ending and the possibility that either outcome could be possible.

I’ll keep the poll open for now and will update this post if the results shift significantly one way or the other. Until then, check out more of our in-depth Paul Verhoeven and Arnold Schwarzenegger analyses.

*Can someone confirm this in the comments? One Internet message board commenter insists that both Arnold and Verhoeven agree with “dream,” but Wikipedia claims that they are of differing opinions.

138 Comments on “Total Recall: Dream or Not A Dream? Let’s Settle This Once And For All”