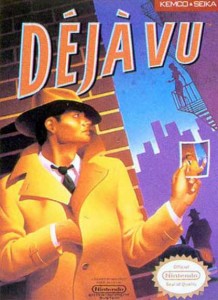 Actually, this game doesn't figure in this post. Never played it.

A “well-made plot,” in literary circles, is not simply a good plot, but rather a plot that runs on cause and effect, where the world, the characters, and the narrative arc all behave according to believable causality.  In fact, mere causality is not enough.  You could write a novel where event A leads to event B, which leads to event C and so on — all perfectly rational on the small scale — and end up with an event Z which is unrelated in all but the most mechanical of ways to any previous event other than Y.  This would not be a well-made plot.  Well-made plots must be teleological.  They require causality to function on the large scale, where it sometimes goes by the name of fate.  Finally, on a more pragmatic level, the well-made plot also assumes a certain minimum level of incident.  A novel that describes the experience of drinking a single cup of gas station coffee in bone-pulverizing detail could not be said to have a well-made plot, no matter how rationally it is worked out.  Well made plots need to have weighty narrative goals that are teased, built up to, and achieved. (Note here that the narrative goal is not necessarily the same thing as the protagonist’s goal:  heroes of well-made plots can fail, but as long as their failure is a decisive, causally inevitable moment, it can still be a narrative goal.)

Probably the genre most dependent on the well-made plot is is detective novel, or whodunnit. A detective novel that lacks large-scale causality cannot properly be called a detective novel at all, no matter how many people you have running around smoking cigarettes in fedoras.  There used to even be informal rules about this sort of thing, the idea being that a well-made detective story was one where an observant and intelligent reader could potentially solve the mystery as soon as the detective did.  Which means that you can’t have the detective notice something crucial and keep it to him/herself:  the reader needs to be informed!  All of the Encyclopedia Brown stories are well-made in this sense, even if the solutions are sometimes moronic.  (The Sherlock Holmes stories, incidentally, are not well-made.  Sherlock is forever noticing details which Watson, the narrator, is too dim to pick up on, with the result that neither Watson nor the reader gets the crucial clues until Sherlock has already given the game away.  And for a more extreme example, see Harry Stephen Keeler’s The Riddle of the Travelling Skull, for instance.)

Understanding how well-made plots work in detective stories can help us understand how they work in other kinds of stories, too.  In the mystery novel, the well-made plot is generally understood to be “about” answering the question of who committed the crime:  thus, the whodunnit.  But whodunnits are for the most part also howdunnits and whydunnits.  If we don’t learn the killer’s motive and modus operandi, we’re going to find the story unsatisfying.  And ideally, both of these are also going to be subject to the same kind of large-scale causal logic, and to the same “smart readers can work it out on their own” standard of narrative fair play. Those are the questions that occupy the reader of a detective novel:  who, how, why.  Other questions matter less.  What has been done is necessarily known — a murder — and where and when usually are, although all three of these can be destabilized over the course of the work so that we learn M. Body was actually killed in the hall not the conservatory, or that he was never killed at all.  Mysteries focusing on forensic science do tend to focus on when and where the victim was killed, but only in that it might lead us to the killer.  The information is of no use in itself.  A real whendunnit would have to be written from the point of view of, say, an insurance investigator, attempting to prove that the victim died hours after his policy had lapsed, right?

But actually, that’s not true at all!  Whendunnits do exist, they just aren’t detective stories — or aren’t necessarily detective stories, at least.  Rather, they are stories structured as flashbacks:  stories that begin by showing us that a certain important event has taken place, and then walking us through the circumstances leading up to it.  (Whendunnits are always also howdunnits.)  Nimród Antal’s thriller Vacancy was originally structured like this, before the studio cut it into a more linear and less interesting form.  It was supposed to open with a shot of a wrecked car, pulling slowly out to reveal that it had been driven into a hotel lobby.  Pulling out further, we see police milling about, and a number of stretchers with bodybags.  Then we see Kate Beckinsale giving her statement to the investigator — and then we flash back, and she’s riding in the unwrecked car with Luke Wilson.  That right there is a whendunnit.  We know that sometime before this night is over, that car is going into the hotel lobby.  We also know who is involved, at least in a nebulous way.  But we don’t know when or how.  When and how are the most important question with this kind of plot, just like who and how are the most important questions in the classic detective novel.  And both species of plot can be well made. Both have well-defined causal arcs that start out partially obscured and are completely revealed by the end of the story.  The viewer/reader should be able to work out the solution to both ahead of time.  Not always in a very articulate way, to be sure.  There’s no tell-tale clue halfway through Vacancy that points to the car flying through the window precisely twenty minutes before the end of the film.  But when those dominoes start falling into place, the viewer needs to be thinking “Oh okay, I get it, here it comes, here it comes!” or else the plot has utterly failed to function.

Normal plots – ones that aren’t flashback-structured, like the whendunnit, or post-facto, like the whodunnit, tend to be dunnwhats.  We know who will be doing things, because the main characters are established early on — usually even before we start reading.  Pick up a serious respectable novel off the shelves at your local bookstore, and I will wager you dollars to donuts that the synopsis on the jacket has a lengthy description of the main characters.  But we do not know what they will do. (An important variant, of course, is the exposition-of-character novel, in which what we learn is not so much what the character will do but who they really are on a deep psychological level.  Still, this is usually revealed through a series of critically revealing actions, so the label “dunnwhat” can still apply.)  In the well-made version of this, it’s possible to figure out what the characters will do before they actually do it.

In so far as they aspire to a well-made plot, then, all novels are mystery novels.  There should be information scattered in the early part of the narrative that in some way explains the crucial mystery that gets solved at the end, whether that mystery is who’s been murdering guests at the chateau, or whether the main character will find happiness despite stifling social pressures.  This doesn’t mean you can’t have plot twists!  A little uncertainty on the small scale is necessary to keep things interesting.  But if even retrospectively there’s no way for the reader to figure out what has been dunn, well… that’s a problem.  Not necessarily a crippling one, but a problem.  Take the Harry Potter books:  you keep thinking that Dumbledore is playing a deep game, and that when you’re finally privy to his plan — that is, when Dumbledore finally does the important “what” that his character arc has been building towards — everything will make sense.  But this never happens, which retroactively makes both the character and the whole series less satisfying.