[I intended to cover 20-22 in this post, guys, I really did.  But there comes a point when you look down and realize that you’ve written 3,500 words on a single episode, and if you keep going at this rate you’ll never get to sleep tonight.  I suppose we should all have such problems.  Stupid TV!  Be… less… interesting!] 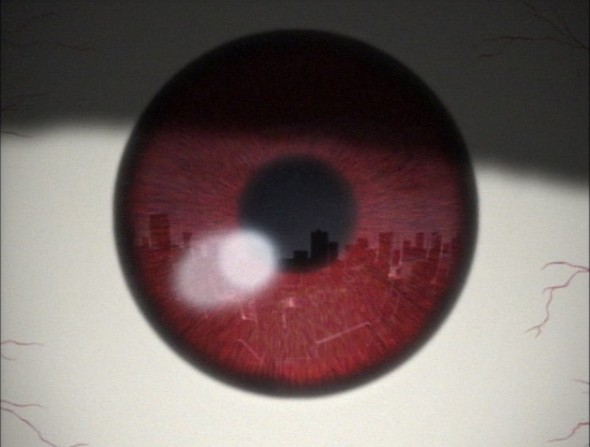 First, let’s just get this out of the way:  this episode is not actually related to the Godard film of the same name that I referenced in my last post.  The title in Japanese actually translates as something like “Requiem for a Clown.”  It’s a little hard to know why the translators would do this. I mean, granted, the assassin character is named “Mad Pierrot,” and Cowboy Bebop does love its New Wave, so the reference makes sense.  But why change it at all?  Did they think that the American audience wouldn’t make the connection between Pierrot and clowning, but would catch the film reference?  I find the change somewhat unfortunate.  Every other episode references music in the title, why break the pattern?  (And if you had to change it, it’s not like Godard has some kind of monopoly on crazy people named Pierrot.)

Of course, I suppose it’s possible that Godard’s film was released in Japan as “Dokeshi no Rekuiemu,” in which case color me embarrassed.

Anyway, this is a really strong episode, and there’s a lot to say about it, on levels both sublime and ridiculous.  Let’s start with…

Cowboy Bebop has never been shy about dipping its toes into the horrific.  We get little moments of horror film aesthetics in episodes 4, 5, 6, 11, 16, 20, and (looking forward), 23.  But usually they are only moments:  the only episodes that are straight-up horror are #11, “Toys in the Attic,” and #20, “Pierrot le Fou.”  Even with “Toys in the Attic,” the horror is undercut by its unfathomably weird formalist structure and the goofy twist ending.  But “Pierrot le Fou” is pure horror from start to finish. 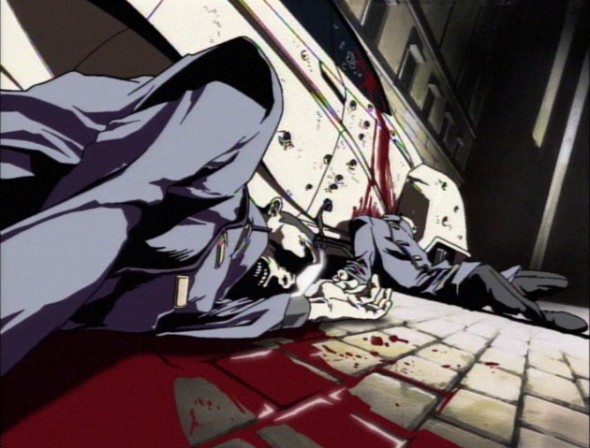 I mean, it's not exactly subtle.

The episode begins with Spike witnessing the brutal murder of some kind of high muckety-muck (a senior police official, we later learn), at the hands of Mad Pierrot, an enigmatic assassin in Edwardian evening dress.  The assassin notices Spike watching, and decides he has to die.  That’s literally it:  it’s not like the crew was trying to track Pierrot down for a bounty, it’s not like Spike tried to step in and protect the victims.  It’s not even like he saw more than the back of the guy’s head!  He was just there, wrong place, wrong time.  This absence of agency, in itself, is a little unsettling, but not nearly as upsetting as what happens next, which is that Spike gets utterly p0wned. 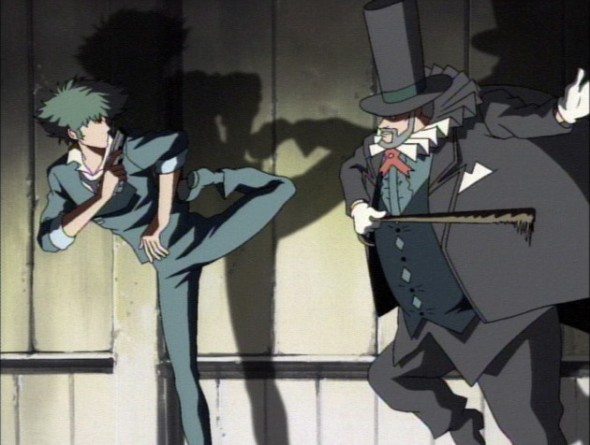 Going through this sequence frame by frame is honestly hilarious. 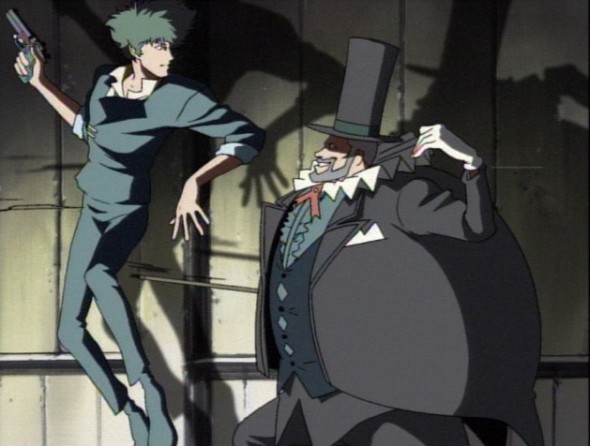 Not really seeing the ass-kicking yet. Looks a little Peter-Pan-ish, if anything. 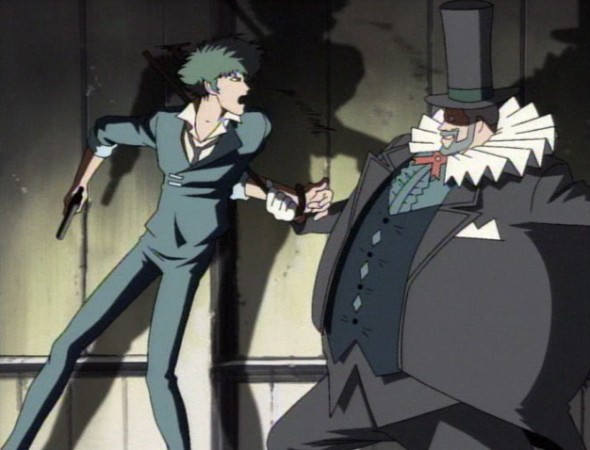 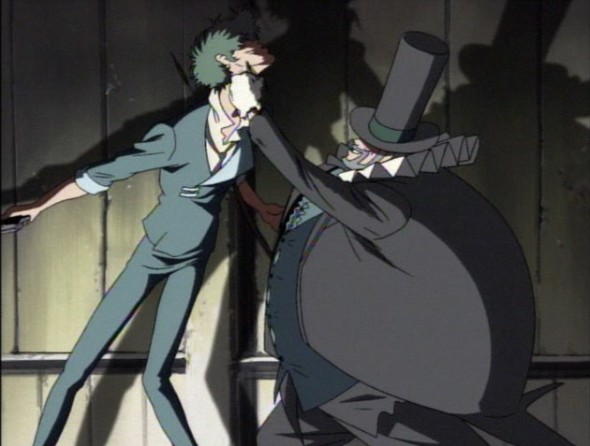 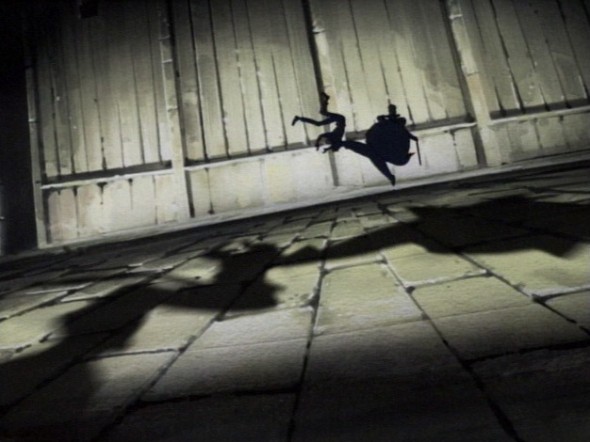 The killer beats the ever-living crap out of him, and then, once we’ve gotten used to that, ups the ante by violating the laws of physics. The last image here comes from a sequence where Spike’s attacker kicks him into the air four or five times without either one of them touching the ground. It’s not a question of athleticism:  the scene flaunts its impossibility as Pierrot bobs through the air like a zeppelin of kung-fu death.  It’s a startling and beautiful moment, especially done in silhouette like that, but also an intensely spooky one.  Long story short, Pierrot thrashes Spike into the ground, and stands over him holding him at gunpoint.  There’s a long tense moment (with a delicious dissonant string effect in the soundtrack) as the two of them stare at each other.  We get a good long look at Spike’s face, and it’s clear he’s thinking just what we’re thinking:  how the hell did this happen?  Luckily, their fight is interrupted by a stray cat, which sends the assassin into a screaming panic, and Spike is able to beat feet thanks to a handy cache of explosive cylinders at the other end of the alley.  (This, by the way, is a Wolfenstein solution to a Cowboy Bebop problem.)

I am pretty sure that this is the first time we have seen Spike get beat up. (We’ve seen him hurt plenty, but never out-martial-arted.)  It’s definitely the first time we’ve seen him run away.  And this really raises the stakes a little bit.  At this point in the series we have gotten used to thinking of Spike as an invincible badass.  Handing him a beating like this helps to establish him as vulnerable, not only for this episode, but for the all-important confrontation with Vicious that we all know must be coming in the series finale.

But back to the horror tale at hand. After the opening beatdown, we end up in a pretty standard horror plot that most readers will know from the original Dracula and Buffy the Vampire Slayer (but see also the US remake of The Ring, Lair of the White Worm, Silence of the Lambs, Friday the 13th Part II, several of the Nightmare on Elm Street movies, and dozens of others).  It goes pretty much like this:  1) heroes are menaced by the monstrous other, 2) heroes try to learn the monster’s weakness and origin story, 3) heroes successfully defeat the monster using the information they’ve gathered.  Or if you’re nasty, 3) the information proves ineffective and everybody dies.

In stories like this, the monster isn’t really a monster. I mean, is it ever? Rather, the monster is an emblem of irrationality.  The heroes in turn stand for rationality:  even if the tool they end up using is something thoroughly unscientific, they basically represent the triumph of science over magic.  On the other hand, if you’re a Freudian, which a lot of the people who write about horror are, you can see this as the triumph of analysis over the unconscious.  The monster here represents the repressed trauma, which is interfering with the patient’s day to day life (in this case by physically killing them).  The investigation of the monster represents analysis, in which we learn that the masked killer doesn’t really want to hack teenagers to bits, he’s just got some mommy issues.  Assuming the analysis is successful, the problem should go away.  And if not, there’s always Prozac.

So that’s the basic structure, and some of its symbolic underpinnings.  But there are two very distinct ways that this plays out in the stories themselves.  In Dracula, the most horrific moments of the plot are front-loaded:  Harker’s experience in the castle is deeply creepy (especially the scene with the count climbing face first down the wall), and Lucy’s seduction and death are just as dark.  But once the investigation starts – that is, once Van Helsing shows up with his communion wafers and his blood transfusions – the pressure lets up slightly.  It still works as horror, but the investigation’s role in the narrative is to control and ease that horror.  This is also the way that it works in Buffy:  once you’ve had the requisite “hangin’ out in the library” scene and learned the villain of the week’s nature, the show changes from a horror/action/rom-com to an action/horror/rom-com.

However, there are a lot of other works where the investigation itself is not comforting, where the big reveal of the mystery is carefully prepared as the most horrific element of the entire narrative.  Psycho works like this, as does Sleepaway Camp. H.P. Lovecraft adored this kind of story–typically, for him, the moment of revelation for the character is the moment where language itself breaks down in the story, so that the reader is still left in the dark (and the character is quite often destroyed by the knowledge). There’s an almost self-parodistic moment at the end of one of his stories where the monster is revealed as “eyes – and a blemish.  It was the pit – the maelstrom – the ultimate abomination.  Carter, it was the unnameable!” At the risk of being overschematic, one could claim that Dracula is an example of the rationalizing mindset that gives rise to psychoanalysis (Freud and Stoker were contemporaries, after all), while Psycho and Lovecraft represent the fallout from psychoanalysis:  artists coming to terms with the fact that the unconscious remains stubbornly unconscious.

Interestingly, Cowboy Bebop plays it both ways.  In “Toys in the Attic,” the fear is ramped up, and up, and up, right until the point where we figure out that the monster is actually just some seafood that’s been left in the fridge too long, at which point it totally collapses.  In Pierrot le Fou, on the other hand… (feel free to stop the video after two and a half minutes or so). 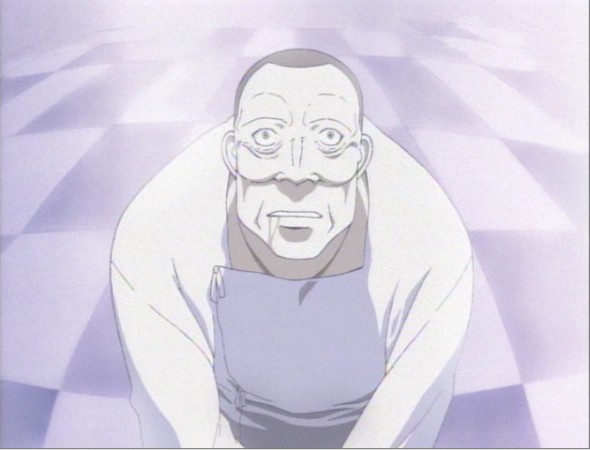 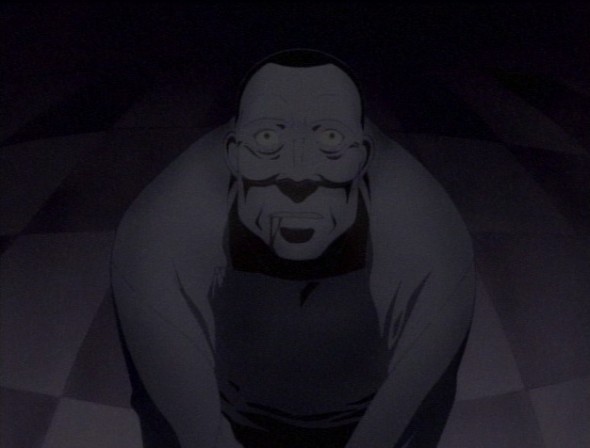 Now, aesthetically, Cowboy Bebop is all about combining moments of visual excess with exciting musical cues, and this is no exception.  It’s just that this time the excess is horrific excess.  But here’s the interesting question:  where exactly are these images coming from?  We’re supposed to think that Ed broke into a super-secret police database, and the very first shot of the sequence is even slightly fisheyed, as if it was lifted from a security camera.  But it’s hard to imagine that they would have had random shots from Pierrot’s POV.  It’s hard to imagine they would have included multiple closeups on the laboratory cat.  The upshot of it is that I don’t think we’re seeing what Ed sees.  She sees something like that, yeah, but not all of it.  We have information that the characters in the story don’t.  And that’s interesting.  Especially because the cat is almost certainly the most important part of the whole equation.

While this is going on, Spike has received a letter from the Pierrot inviting him to meet for a final showdown at the killer’s secret lair in an abandoned amusement park.   Spike of course goes running off to his inevitably death, much to Faye’s chagrin.  That much is to be expected… but elaborately themed secret lairs, final showdowns, and villains who taunt the hero through the postal service are not really trademarks of Cowboy Bebop.  They seem to come from a different tradition.  And that brings us to the second way of looking at this episode: