I’m going to go out on a limb here and say that Monopoly is a terrible game.  First of all, it takes twelve hours to play.  Second, it’s boring.  Very little skill, or even decision-making, is involved.  Early in the game, you have the option to buy or not buy properties, but it’s not really an option:  having more land is always good, so you pretty much buy everything you land on, barring perhaps Baltic and Mediterranean if you’re unlucky enough to land on them right out the gate.  (Speaking of which:  are the low-rent street names supposed to be vaguely racist, in an old school Daniel-Day-Lewis-in-a-top-hat kind of way?)  Later on, you can decide whether or not to build houses, but again, this isn’t really an interesting or complicated choice.  If you can afford it you do, otherwise not.  Mostly, you sit back and roll the dice, yawn, and roll your eyes as your friend Jeff offers yet AGAIN to trade you St. James Place for Marvin Gardens, which, like, get over it Jeff, it’s so not even happening.

Finally, it’s a horrible way to teach kids about economics.  Everything runs on cash, no credit allowed?  (You can mortgage your properties, of course, but that word does not mean what the game thinks it means.)  You’re only allowed to purchase real estate that you happen to randomly walk past?  Hotels are always more lucrative than row houses?  All of it is nonsense.  And it’s even worse when it comes to business ethics!  Remember, real estate developers who wind up in jail never did anything wrong.  They just rolled the dice like anyone else, and ended up landing on the wrong square:  running your business 100% legally is not even possible, so why try?  Also remember:  income tax is something you only pay if you’re an unlucky chump.  The tax rules in Monopoly only make sense if you assume that every player in the game routinely fails to pay their taxes at all, and landing on the square means you got audited. 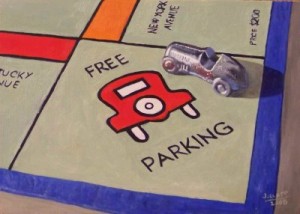 One thing I do like about Monopoly, though, is the Free Parking square.  Most board games have lots of squares that have no effect, and a handful of squares that do something interesting.  Not Monopoly, though.  The Monopoly board is ridiculously dense.  It only has that one square in which nothing at all happens, and as a result they have to make a big deal of it.  Just look at that jaunty little car!  When I played the game as a kid, we apparently found the Free Parking square boring, because we always ended up turning it into some kind of jackpot:  either landing on it got you $500, or all the income tax money was piled up in the center and whoever landed on Free Parking got it all, or when you landed on it you had to do a Jäger shot.  (We mostly played that one in college.)  But these days, I like the fact that, in its purest essence, the Free Parking square lets you do nothing – lets you escape, for one too-brief moment, from Monopoly’s nightmarish cycle of buying and selling, paying rent and extracting rent, grasping and desiring.  (You say capitalism, I say saṃsāra.)

So the next time someone ropes you into playing Monopoly, I encourage to pretend to play Monopoly while in fact playing a different, secret game that I am about to teach you, called Anarcho-Syndicalist Collective. The rules are simple.  First, play Monopoly as you normally would until you manage to land on Free Parking.  This accomplished, AVOID TAKING YOUR NEXT TURN AT ALL COSTS.  After all, as long as you don’t roll the dice, you don’t have to move off of Free Parking, which means you can stay outside of the capitalist system, which is the real goal of Anarcho-Syndicalist Collectives in games as in life.

There are no rules to this portion of the game, and creativity is encouraged, but there are a number of recognized strategies.  The most common, and the only one generally considered to be sporting, is to try to convince your fellow players that Monopoly is a terrible game and that you’d all be better off doing something else with your time.  Less orthodox techniques include taking an absurdly protracted bathroom break (the “Stall in a Stall” gambit), throwing the board out the window (the “Direct Action” technique), or simply refusing to pick up the dice, without saying anything in your defense other than “I would prefer not to” (known as “taking a Bartleby”).  Truly advanced players may wish to simply stand up from the table, turn around, and walk out of the room, and then out of the house, walking, walking, not stopping, until they reach a plot of unclaimed land from which a meager life can be eked out, growing hemp.  And of course, if all else fails, you can just explain to your friends that you have in fact been playing Anarcho-Syndicalist Collective, and that you aren’t going to move anymore because you’ve already won your game.  This lacks a certain creativity, and will probably convince your friends that you’re an arrogant snot.  But on the bright side, they will almost certainly never ask you to play Monopoly again, which is what I call a win-win.

Note:  Of course, Anarcho-Syndicalist Collective doesn’t model a sound economic policy any more than Monopoly does.  But it’s more fun.  And the fact that it is more fun to attempt to get out of playing Monopoly than it is to actually play Monopoly has got to be pretty damning, by most lights.

Also note:  There’s probably a specific form of non-participation in capitalism that resembles the game I’ve designed far more closely than Anarcho-Syndicalism, which I guess is mostly about labor unions?  Anarcho-Syndicalism has the funniest name, though.

Furthermore note:  Economically conservative readers may prefer to play “Going Galt,” which is exactly the same as Anarcho-Syndicalist Collective save for the following additional rules:
1)  The new “goal” square is not Free Parking but Income Tax, and rather than attempting to avoid moving off of the square, your goal is to avoid paying the fee.  (Logically, Luxury Tax and any number of the Chance and Community Chest cards would also qualify — but I see no reason why the right-wingers should have an easier game.)
2)  During the “actually playing Monopoly” phase of the game, you must acquire at least one complete Monopoly.  Bonus points if it’s the railroads, or if you fully leverage it out with hotels.  If you land on Income Tax before acquiring the necessary properties, grit your teeth, pay it, and play on.
3)  Finally, when you eventually walk away from the table, you must tear your property cards in half. Flinging the pieces in your opponents faces, while shouting “I am leaving it as I found it!” is entirely optional, depending on your style of play.