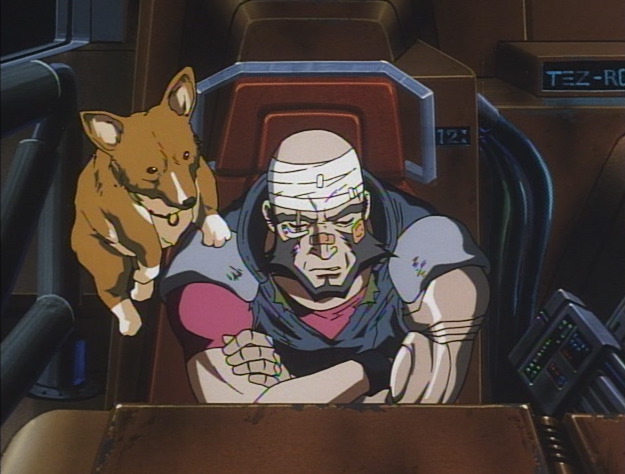 [Sorry, Jet, only one episode this time.  But on the bright side, you also get to hear my Grand Unified Theory of Cowboy Bebop™!  Expect to see a post on the rest of the episodes from this disc sometime soon, and then I’ll close out this series in July by writing up the last disc of episodes and giving the good people at Fox some friendly and sure-to-be-ignored advice about how to not wreck the thing when they make a movie out of it. – Stokes]

I think of the postmodern attitude as that of a man who loves a very cultivated woman and knows he cannot say to her, ”I love you madly,” because he knows that she knows (and that she knows that he knows) that these words have already been written by Barbara Cartland. Still, there is a solution. He can say, ”As Barbara Cartland would put it, I love you madly.” – Umberto Eco

Cowboy Bebop starts off as a goofy action show.  Kung-fu, wisecracks, car chases, and spaceship dogfights are the order of the day.  About a quarter of the way into the series’ run, it turns into a stylish neo-noir (with occasional dips into magic-realism), concerned with honor, debt, and the importance of keeping one and paying the other in a world rife with moral decay.  Another quarter of the way through, and it turns into a subversion of that same noir morality, in which honor is revealed as empty pride, and debts are shown to corrupt both the debtor and the debtee.  And now, as we head down the home stretch, it becomes…

Well, none of the above, and all of them.  It would probably be more accurate to say that Cowboy Bebop has always been all of these things at once, although I do think that an average viewer would probably notice the goofiness more at the beginning, and so on.  That doesn’t mean that nothing has changed though.  Like I said in the my very first post on the subject, Cowboy Bebop is a piece of iterative art.  Running through the motions – a giant failure in most narrative forms – is here an important and constructive way of creating meaning.  It’s only fitting that a show whose plots are always about shadows reaching up out of the past should depend so thoroughly on the audience’s memories. 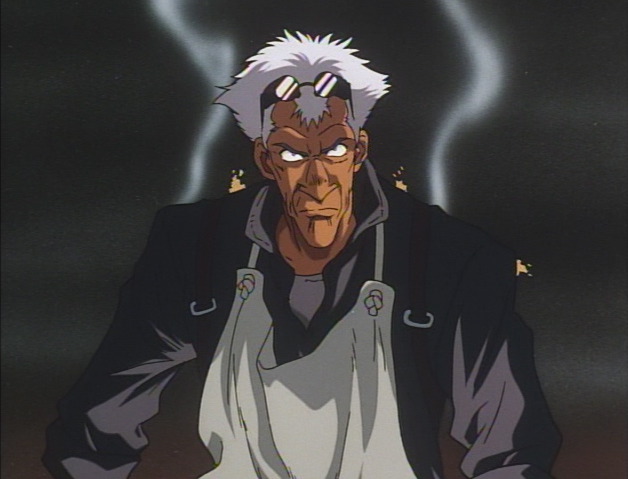 Meet Doohan. You can tell that he's awesome, because he strolls into the frame LITERALLY ON FIRE.

19) The presence and importance of the past is amply on display in the episode under consideration today, Wild Horses.  The story is a little bit scattershot, but I’ll try to give you the broad strokes.  Spike is off trying to get his spaceship tuned up by Doohan, a reclusive genius who basically fills the role of the Yoda character in Star Wars, or the Hattori Hanzo character in Kill Bill, or the Invisible Swordsman character in The Three Amigos, except instead of training Jedi, or making swords, or getting shot by Chevy Chase, he’s a spaceship mechanic.  Meanwhile, Jet and Faye chase down a band of space carjackers who have perfected a computer virus that can incapacitate any spaceship.  (N.B. the show refers to these guys as “space pirates,” but I reject this term because it implies a level of awesomeness not evident in the text.  There’s nothing nautical about these guys.  Well, they do transmit their virus by harpoon… space whalers?)   After Spike gets his ship fixed, and Jet and Faye get utterly schooled, all three of them unite to take the pirates carjackers down. 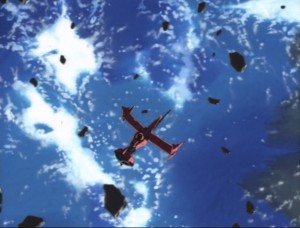 The fundamental plot of the episode turns out to be Man vs. Gravity

A normal show (i.e. one that trades on fantasies of masculine empowerment) would probably end with Spike blasting the carjackers out of the sky, after saying something like “Now, you will face the power of this fully operational Swordfish II,” or worse, “Leaving so soon? Oh well, I guess I’ll see you laser!” This is not what happens.  Instead, Spike flies juuuust well enough so that the carjackers end up accidentally harpooning themselves seconds after they harpoon him, and both crippled ships go careening into Earth’s gravity well.  From this point, a normal show would probably have had Spike and the carjackers having to put aside their differences and join forces to escape… but this being Cowboy Bebop, the carjackers instantly collide with an asteroid and explode.  (No bounty for you, protagonists.  Sorry!)  Then there’s one more big action sequence where Doohan comes charging to Spike’s rescue.  This is important, and we’ll come back to it in a bit.  First, let’s talk about this episode’s major symbolic theme, which is:  old junk is better than new crap.

I Repeat:  Old Junk is Better Than New Crap

But pithy though that is, it doesn’t really capture the idea I’m getting at, so let me give you an example from my own life.  Modern cell phones are (smartphones excepted), what I would call “new crap.”  They are flimsy little bits of plastic, cluttered with adware, and with features that I don’t have any use for, and with hideous, hideous pixel art.  They are designed to break in a couple of years so that you buy a new one (or rather, so that you sign up for another binding contract).  Now, contrast this to the first cell phone I ever had:  the Nokia 3310.  This was by no means a glamorous phone.  Its silhouette can be most charitably described as post-communist chic, its sound processor could only process one waveform (a sawtooth wave that sounded like a duck giving birth to an oboe), and its screen was black and white lcd with a resolution of something like 10×20.  It was old junk.  And it lasted more than five years. Eventually the screen gave out, but the casing still looks like it did when I bought it.  Unlike my current phone, which I routinely fail to notice ringing, the Nokia was loud and vibrated like an off-balance washing machine.  If I could find one, I would trade in my current phone for a Nokia Brick any day of the week.  Appliances were appliances back in the old days!  And we had to walk five miles to school!  Uphill both ways!  Get off my damn lawn, you whippersnappers!  Etc. etc.

While I’m sure that my old phone wasn’t actually all that great, my whole point here was to illustrate how powerful nostalgia can be:  it doesn’t matter whether old junk is actually better than new crap, what matters is that this is so easy to believe.

Anyway, Wild Horses trades on this idea heavily.  On the level of the plot, the crew are able to hold their own against the pirates only after they shut off their fancy new “monocomputers” (which are crippled by the virus), and start navigating via “an old communications satellite” and communicating by walkie-talkie.  We see Jet fly into a rage after the carjackers call his ship an old junkheap.   We’re treated to shots of Spike and Jet’s ships looking much the worse for wear.  Doohan is constantly shooting down his assistant Miles’ suggestions for ways to modernize Spike’s ship.  Miles is a devoted fan of the Blue Socks, a baseball team whose glory days are long behind them.  And Doohan is pretty damn grizzled in his own right.  See, everything worthwhile is totally beat up! 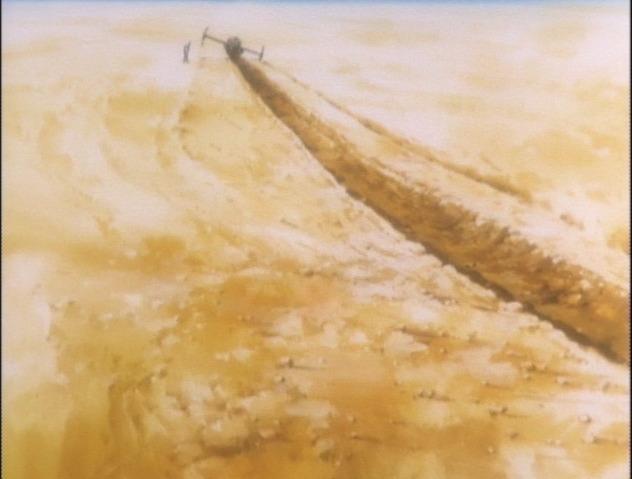 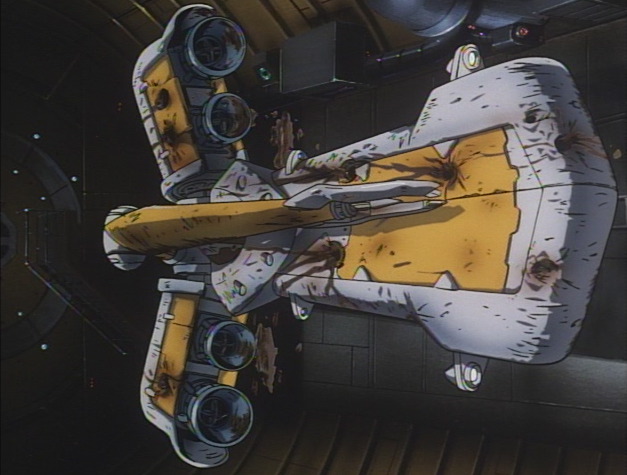 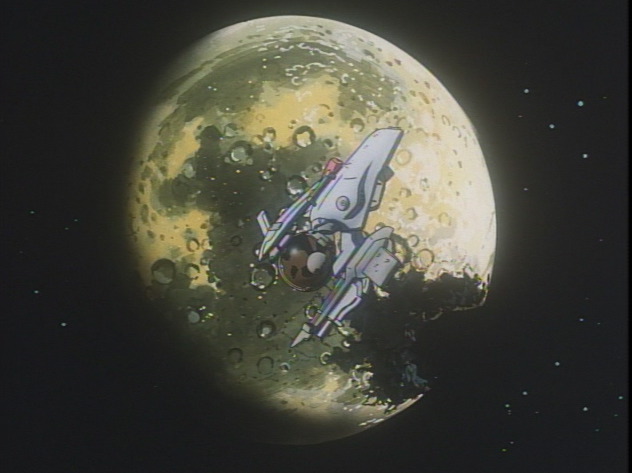 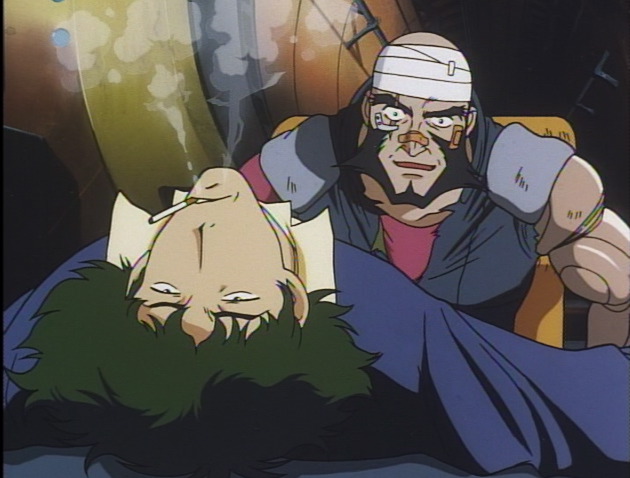 But two images in particular are worth paying closer attention to. First, this is what a monocomputer looks like.  Forget for a minute that, within the specific plot of the show, these are less useful than “old fashioned” 20th century computers.  Focus instead on the fact that the cuttingest edge technology of Cowboy Bebop’s universe… 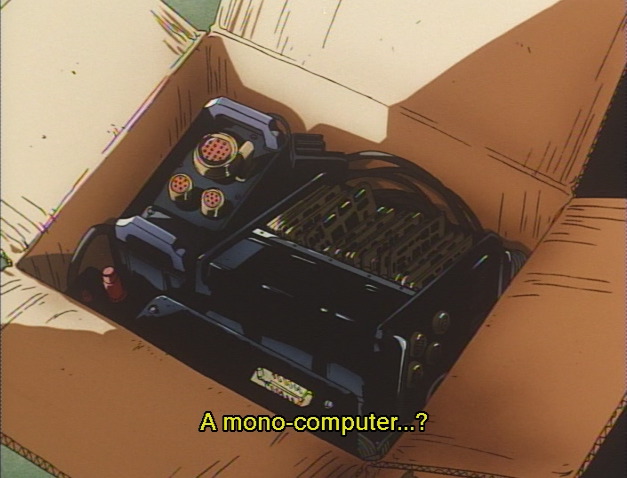 … operates on freaking punch cards.  Sometimes, old junk will be the best tool for the job.

Second, take a look at this little doohickey. 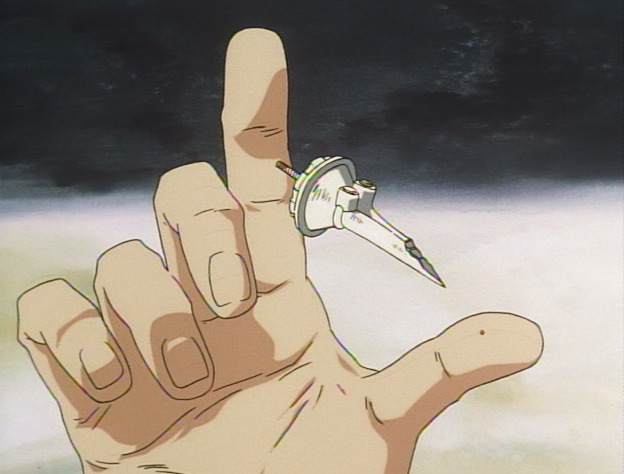 It’s a broken piece of Spike’s spaceship that Doohan replaces in the first half of the episode.  By any rational standard this is trash… and yet, Spike hangs onto it, and it ends up saving his life:  he uses it to carve an HUD into the inside of his cockpit, allowing him to make some precise and crucial adjustments to his orbital path, in a move apparently based on the real life exploits of astronaut Gordon Cooper. 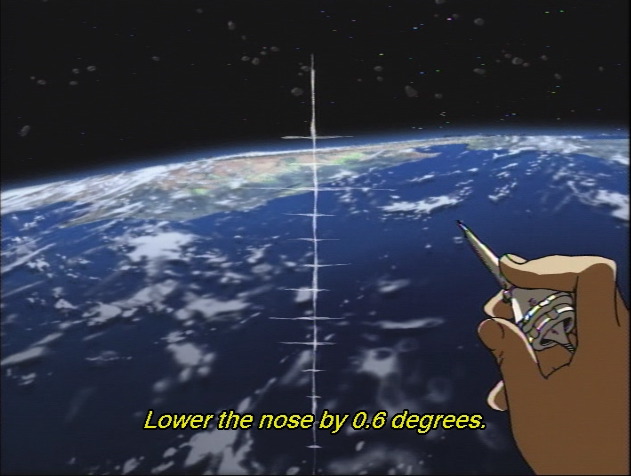