Continued from Part 1.  You may also want to read Belinkie’s post on the same subject and this older post by Perich. 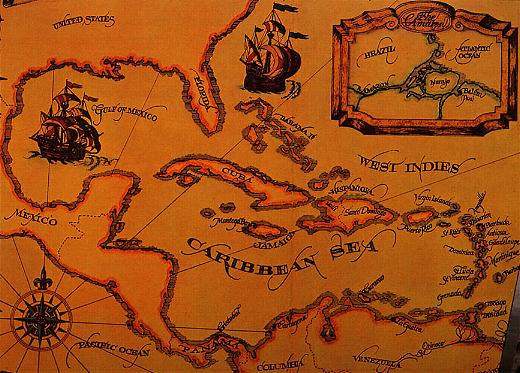 Yarr! There be Xanax in these waters!

Let’s say you invite me over to your house.  I will wander around the rooms, getting to know the space, rifling through your medicine cabinet (because I’m that kind of jerk), maybe even looking at the search history on your internet browser.  (I am also that kind of jerk.) I will encounter any number of objects as I do this, and as I do, I will discover what kind of person you are, oh Xanax-popping, Bieber-album-downloading friend of mine.   But most of my time will not be spent making discoveries.  Instead, I’ll be exploring.  Exploring is simply the act of moving around in an unfamiliar space and seeing what’s there.  Discovery is finding something important and unfamiliar.  What counts as important?  Well, it depends on what the searcher cares about.  Technically, I discover things every day.  The first time someone rowed up the Amazon, they “discovered” a new stretch of river every ten feet or so.  But we make a distinction between object and world. Most of the Amazon is just territory to explore, but if you encounter a new species of gecko, or the headwaters, or the Lost City of Gold… those are discoveries.

Crucially, I can’t discover anything that I know will be there.  (This is one of the reasons why we talk about explorers “discovering” places where other people have been living for generations, although ALL of the other reasons are straight-up racism.)  Finding Xanax in my friend’s medicine cabinet would usually constitute a discovery, but not if they have “Xanax 4 Life” tattooed across their navel.  By the same token, I can’t explore a space I already know well.  I can discover things in my own apartment if I forget that I have them, or if someone plants them there — like, if there’s a surprise cake waiting in my refrigerator, for instance — but I can’t really explore that space, because I already have a detailed  (though faulty, because cake-deficient), mental map of its layout and contents.  This common focus on the unknown is why we think of exploration and discovery in the same breath.  There are situations where I can discover, but can’t explore (the cake scenario), and situations where I can explore, but can’t discover (because there’s nothing out there), but exploration is often a precondition for discovery.  If I don’t go wandering around in the woods, I can’t stumble upon the clearing with all of the wildflowers.

Well-made plots hinge on discovery.   Learning the murderer’s identity in a mystery is (or should be) a big moment of discovery, as is the point where we realize the crucial facts about the serious dramatic protagonist’s psychological makeup, or what have you.  But a huge, huge part of actually reading fiction is about exploration. Not every detail of the plot is actually critical to the plot.  Few are, in fact.  Even in a detective story, which tends to be weighted heavily towards discovery, there’s an aspect of exploration as well:  the main character explores the seedy underworld, and then discovers who committed the crime.

In fiction, we need to put the big moment of discovery at the end, even though in the real world it might not work that way.  In real life, the detective might put together a strong circumstantial case early on, spend a few weeks more looking for the smoking gun, find nothing, and see the crook convicted on the strength of the circumstantial case anyway.  In narrative terms, that’s not satisfying.  There can be a steady stream of discoveries throughout the novel, but as you get to the end they need to be bigger and thicker on the ground.  By the same token, a story’s beginning will tolerate large swathes of directionless exploration in a way that the end simply will not.  And it’s not just detective stories where this matters.  If I actually am in therapy, I will probably continue to explore my psyche for months or years (or even indefinitely) after I discover the big issues shape my interaction with the world.  But who wants to read about that?  So in serious works as well as genre fiction, the beginning of the narrative tends to be weighted towards exploration, and the end towards discovery.  Note that in a classic whodunnit, ruling out a suspect is a major point of discovery — and so the curve I mentioned in Part 1, where you eliminate suspects faster and faster as you move towards the end of the novel, automagically gives you a structure with lots of exploration at the beginning and lots of discovery at the end.

So both detective stories and “standard” narratives depend on the combination of exploration and discovery.  And in both of these, we want exploration and discovery to be teleologically linked.  We want to feel that the important discoveries arise organically out of the protagonist’s process of exploration.  We want to feel that every wrong decision is bringing us one step closer to the right decision, right from the very beginning.  Otherwise when the solution finally does appear, it feels like deus ex machina.

On the other hand, Whendunnits (flashback-structured narratives where we know something will happen, and we’re just waiting for the hammer to drop), do not really tend to feature exploration and discovery in an important way, at least not within the narrative.  This is because the characters are unaware of the plot’s central mystery.  They can’t be trying to figure it out:  they can’t find the Xanax because they aren’t even aware of the medicine cabinet.  Here, exploration and discovery are things that happen to the reader, not the characters.  We feel that we are “exploring” the book (or film, or whatever) when we are not encountering the Big Important Event that we are waiting for, and “discovering” something when we finally encounter them.  But in this case there is no causal link.  The hundred pages of descriptive prose come before the critical action scene not because one leads to the other, but because we read books in order from start to finish.  Furthermore, the whendunnit depends in a very important way on the dead-end false start.  Before the car actually comes crashing through the window, it needs to make several premature attempts that fail.  You need narrative threads that seem like they’re going to lead to the big fated event, but which actually go nowhere.  They’ve got to go nowhere — reserving the important events to the end is how whendunnits build tension!  Which means that our “exploration” of these false threads is only mechanically connected to our eventual “discovery” of the real one.   Kill Bill is a handy example here.  Whenever the Bride squares off against one of the other Deadly Vipers, we know full well that she’s going to end up killing them.  Tension in this kind of showdown (like in other kinds of showdowns) depends on our not knowing when the fatal blow will be struck.  Every time the Bride takes a swing, then, we’re seeing one of those dead-end false starts that I was talking about.  These are important, and exciting, and in a very real way what the fight scenes are all about… but they aren’t necessary. In retrospect, they don’t contribute anything to the swing that finally does connect.  (Movie fights are in this regard quite different from real life fights, where wearing down your opponent is a real and important strategy.)

Of course, Kill Bill isn’t actually structured like a flashback.  We know how that plot will turn out not because we’ve been told, but because of the conventions of the genre.  As I mentioned in Part 1, almost any story has a meta-whendunnit aspect if we know the genre well enough.  If we know how things tend to work out in this kind of story, we’re going to be wondering when they will work out in that way that they do.  Interestingly enough, the whendunnit’s charactaristic separation of exploration and discovery appears here too.  It’s important, within the world of the story, for the detective’s exploration to lead to the big discovery that solves the murder.  But our external sense that a murder-solving revelation of some kind is “necessary” does not have an organic aspect.  It’s just how stories like that work.  They could work another way, after all, many stories do.