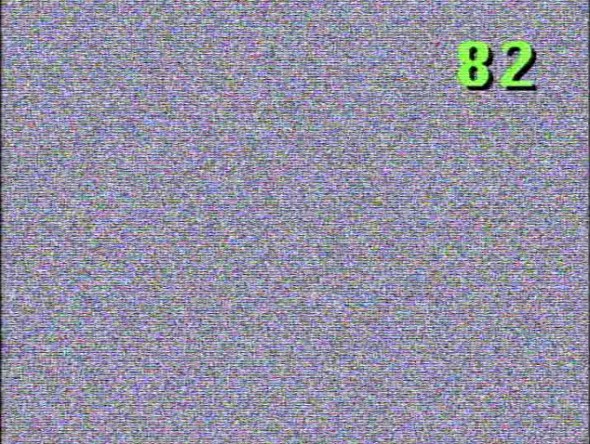 This episode of Cowboy Bebop begins with the image of a TV turning on. Yeah, it's gonna be one of THOSE episodes.

23) BRAIN SCRATCH is tricky to describe.  The show opens with a montage showing a variety of different takes on a single news story about a mysterious cult called “Scratch:  The Migrate to Electronics Movement.”  Actually, that’s not quite true:  the show opens with Spike watching TV and channel surfing, but we don’t get to learn that right away.  Rather, we see what he sees.  Fourth wall?  What fourth wall?  This includes the Scratch cult’s own indoctrination video, a serious news broadcast, and a schlocky Hard Copy style tabloid.  Each of these has its own appropriate music:  the cult gets shimmery new age wallpaper-muzak; the serious news broadcast gets one of those instantly identifiable newsroom fanfares (you know, the ones with a marimba in the background banging out morse code rhythms even though morse code hasn’t actually been used in newsrooms for decades).  The music for the tabloid news show is a little more interesting.  It kind of sounds like the soundtrack to a particularly trashy kind of 70s horror film:  I’m thinking of Zombi II here, although there are certainly other examples.  Beyond the actual news broadcasts, we also see a talk show or two, a commercial for a plot-critical video game system called the Brain Dream, a couple of other unrelated commercials, and, well, this. 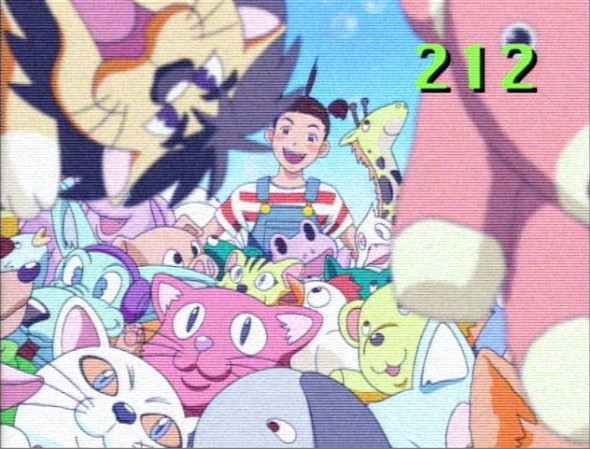 What makes this even weirder is that this clip reuses the 70s horror music from the tabloid news broadcast, and that Alfalfa-looking kid shouts something like “And that’s why our network refuses to broadcast shows like the one you’re currently watching!”  This is not the fourth wall you are looking for.

I suppose I should mention that TV broadcasts of one kind or another are interrupting the main narrative of this episode CONSTANTLY.  In one of them, we learn that Big Shots – you remember Big Shots, right?  The bounty hunter hit parade show that, prior to this episode, one would have guessed was the only TV show that exists in the Bebopverse?  – yeah, we learn that here, three episodes out from the series finale of Cowboy Bebop, Big Shots has been cancelled due to poor ratings.  Fourth wall?  You keep saying that word.  I do not think it means what you think it means. 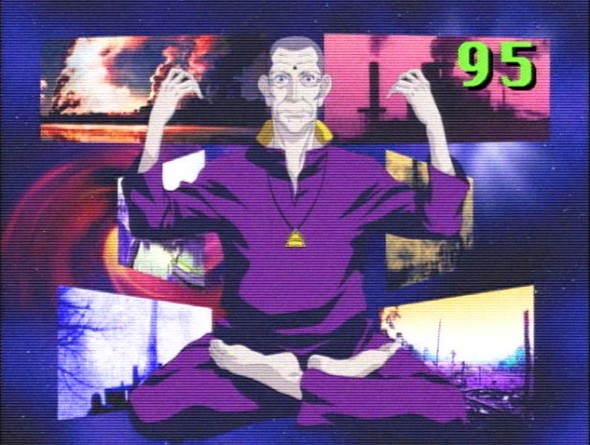 And here we have Londes, in one of the Scratch cult's indoctrination videos. It's neat how they use NON-animated images in the background to help establish his "wrongness."

After their TV binge, the crew sits down to dinner, and Jet provides some helpful exposition.  Apparently, Scratch’s followers believe that they can leave their physical bodies behind by uploading their consciousnesses onto the internet.  The powers that be were content to let this slide as long as the ideology was just a theory, but recently the cult’s members have begun to put their beliefs into practice by committing mass suicide.  As a result, a hefty price has been put on the head of cult leader Londes.  Londes used to be a respectable neurobiologist before he had a mystical vision and broke with society, only to reappear as a shadowy counterculture figure half a century later.  This is a story beat we’ve seen before:  remember Bohemian Rhapsody?  Just like in that one, the crew decides to divide and conquer.  Spike tries interviewing cult members, Jet  manages to track down an old man who might have known the cult leader in his youth, and Ed works her magic with the internets.  Between the three of them, they manage to turn up precisely nothing — again, like Bohemian Rhapsody, and also to a degree like Jamming With Edward.  Meanwhile Faye (who is working alone, having once again snuck away from the BeBop sometime during the gap between episodes), has had a little more luck.  Her plan was to find Londes by actually enrolling in the cult. This leads her to a mysterious abandoned warehouse where she encounters something unexplained and nasty. 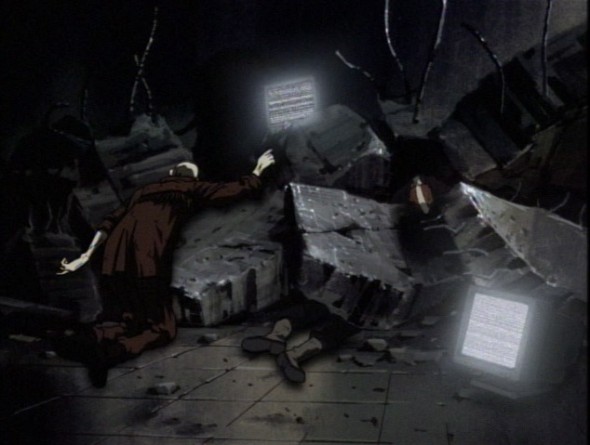 Then there’s a giant pyramid of TV screens, and suddenly they all burst to life, filling the air with static, and Faye’s vision begins to swim…  With the last of her energy, she puts in a distress call to Spike (which again is something we’ve seen before:  remember Ballad for Fallen Angels?).  Spike sets off to rescue her, tracing her signal from his Swordfish, while Jet and Ed try to duplicate Faye’s strategy by enrolling in the cult, just to see if they can track down the mysterious leader.  I mean, since it obviously worked out so well for her, right?

The cult’s uploading process turns out to use the aformentioned Brain Dream system, a nifty gizmo that you control directly with your brainwaves.  Think something like a Nintendo Wii crossed with a Scientology E-Meter.  The good news is that you can complete the process from the comfort of your own home!  The bad news is significantly worse.  The device can write brainwaves as well as reading them, and the cult’s website is more riddled with malware than a post-soviet warez server.  It almost brainwashes Jet, and would have too, were it not for the crew’s secret weapon:  Ein the wonderdog. 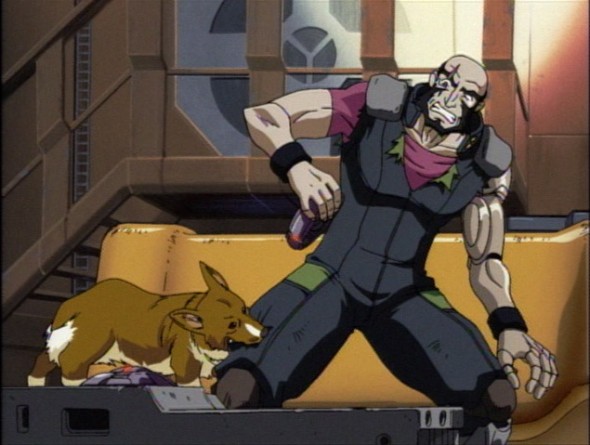 The Jaws of Life.

Before the virus can do serious harm, Ein, uh… takes steps to ensure that Jet snaps out of it.  And then, in a supremely well thought out plan, Ed and Jet hook Ein up to the computer, thinking that this way they can walk through the process without anyone getting hurt.