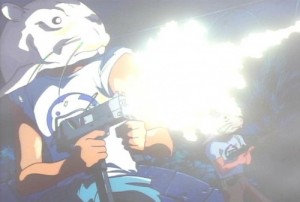 This episode is on craaaaaack!  Okay, so there are these radical eco-terrorists, the Space Warriors, and they are seriously upset at the government of Ganymede, because they keep hunting a “gentle and intelligent” animal called “The Ganymede Sea Rat” for food, just because it’s a cultural tradition.  (And at this point, we all probably start wondering if Ganymede is supposed to stand in for Japan, and the Sea Rat for whales.)  To make their point, the Space Warriors have engineered a retrovirus called “Monkey Business,” which, we are told (at first), acts on the two percent of human DNA that is different from Monkey DNA.  Then we very quickly learn that the effect is to turn people into monkeys.  Hilarious.  And I might add:  craaack. 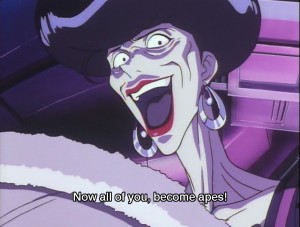 Usually I do my screen grabs in between captions. I think you'll understand why I made an exception on this one.

Spike and Jet capture the Space Warriors’ leader, but her underlings threaten to unleash the virus on Ganymede if she isn’t released immediately.  They do release her, but she just launches the virus anyway, and then it’s up to Spike and Faye to chase down the missile in hyperspace and blow it up before it hits the planet.  Only they don’t manage to do it, and the government decides to fix the problem by shutting down the hyperspace gate instead, almost trapping our heroes inside.  And at the very end, the Space Warriors end up hoisted on their own petard, trapped in hyperspace and monkified (which is probably preferable, at least in terms of boredom and despair, to being trapped in hyperspace and unmonkified).  Faye – who is still a valuable bounty head in her own right – just sort of invites herself into the main cast of characters, and the guys – who just minutes before had her tied up in the brig pending transfer to police custody – just sort of go along with it.  She goes off take a shower.  Spike gets annoyed by this, and follows her with the intention of giving her a piece of his mind.  We hear Faye scream as he walks in on her, and then gunshots.  Jet stifles a rueful laugh, the subtext being “Oh, that Spike.  Always getting shot in the head.” 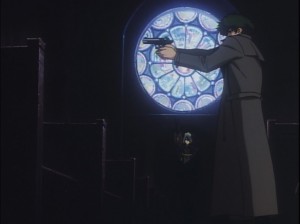 John Woo, eat your heart out. And then call your lawyers.

Spike learns that an old friend from his Mysterious Tragic Past™ (which, we now  learn, is mafia related) has been murdered.  He immediately suspects his old brother in arms, a sword-wielding psychopath by the name of Vicious.  Jet suspects that it’s all actually a trap for Spike. Narrative convention being what it is, they are both right.   Meanwhile, Faye goes to the opera looking for a bounty, and ends up captured.  (The scene in the opera box, where Spike’s old friend’s corpse is propped up watching the show, is one of the most awesome and most nonsensical to grace the show so far.  Even if you were going to set up this elaborate trap at the opera, why bring the corpse with you?  Especially when your whole plan hinges on people still thinking he’s alive?)  Spike goes to rescue her, and the last ten minutes play like a miniature animated John Woo movie:  shootouts in an abandoned church, Mexican standoffs, gratuitous slow motion bird and/or feather shots, face melting guitar solos… the whole deal.   (Actually the guitar solo isn’t really a John Woo thing, but it’s undeniably awesome.)

It ends with a flashback montage, as Spike, shot and stabbed, does a reverse swan dive through the rose window of an exploding church. (!!) We see a brief flashbacks of his earlier life as a mafia enforcer.  We’ve already seen some of these, actually – the rose dropping into a puddle, for instance – in the teaser introduction to the very first episode.  And just like the music there sort of sounded like a music box, so does the music here…. although other than sounding like music boxes, the pieces aren’t at all alike.  (And this in itself is sort of a neat trick – making a musical reference without repeating the melody, harmony, or instrumentation of the original is not exactly easy.)  The flashback ends with Spike’s memory of being nursed back to health by a mysterious and beautiful… baker? Or something? who sang to him while he was laid up in a full body cast.  This cuts back to the present, on board the BeBop, where Spike is once again laid up in a full body cast, and Faye is singing the same song.  The symbolism is clear:  she’s going to be his love interest.  Or possibly his baker.  She opens herself up to him a little by saying she was worried, he insults her singing (this comes off a lot more dickish than I think it was meant to), and she clobbers him with a pillow.  Cue the honky-tonk piano theme, and the end of the episode.