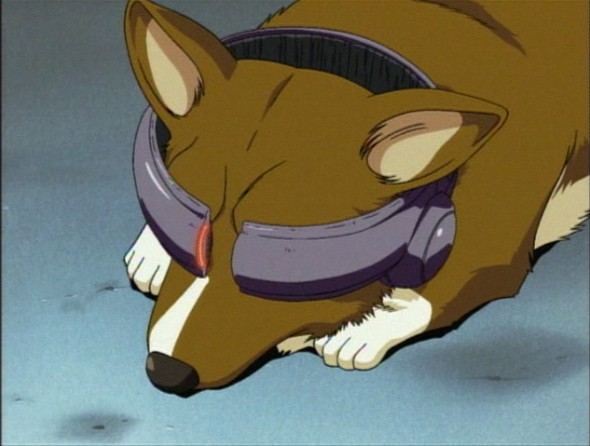 Aww, he's wearing sunglasses and getting his mind wiped! Just like a little Rory Calhoun.

This is pretty dickish, if you really think about it in any kind of detail.  You know the device is going to turn your brain into soup, so you hook it up to your DOG? Would you send your dog into a minefield so that he’ll clear the way for you?  There are some circumstances where this kind of thing might be morally acceptable – in a very real sense, animal testing of medicine is exactly this save that the minefield is biotic rather than petrochemical – but you don’t do it to your pet on a whim unless you’re a rampaging dick.  That said, when watching the episode one isn’t really struck by the moral dubiousness, because the viewer already knows what Jet and Ed do not:  i.e. that Ein is a superintelligent computer genius.  As soon as they slap the headset on him, he hacks the system and gives them access to Londes’ files.  I love a couple of little details about this.  I love that Ein controls the computer with little neck twitches and subvocalized barks, for all the world like a dog that’s asleep and dreaming it’s chasing something.  I also love that because the plan was for Ed to take control of the hacking as soon as the program engages, and Jet has his eyes locked on the display, he never even realizes that Ein is responsible.  Most of all, I love the reaction we get here from Ed. 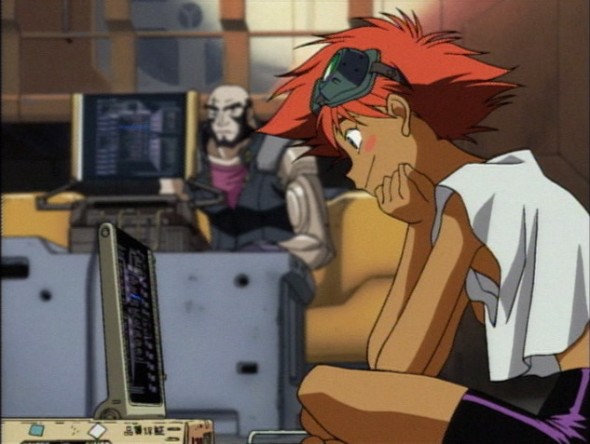 Come to think of it we get more characterization for both Ed AND Ein in episodes 23 and 24 than in all the other episodes combined.

She’s interested.  Not shocked, not even quite surprised (although there’s a bit of that at first), but interested. This was not something that she was expecting, and she finds it fascinating… and her reaction to something that she finds fascinating is to quietly and almost smugly observe.  This is sooooo hackerish.  It’s also the calmest, most rational, and most intelligent expression that we’ve seen on her face in the entire series, which I think is deeply revealing of her character.  And it’s also kind of hilarious because a normal person’s reaction to watching a dog hack the internet would be to act like Radical Edward does in day to day life (screaming, flailing, handstands), but Radical Edward’s reaction is to start acting like a normal person. 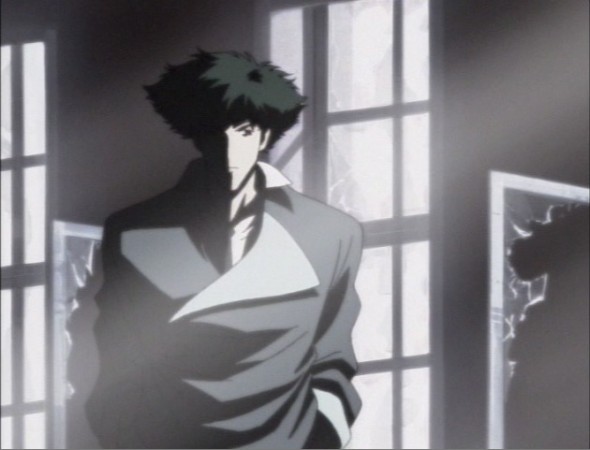 Back to the plot.  Remember when I said that they uncovered the files on the leader?  Actually, they uncovered the absence of files on the leader.  The Londes identity turns out to be a shell, pure and simple.  (You know how I’ve been tracking the way that this show has been playing clever tricks with mystery and closure over the course of the past few episodes? Okay, well here’s the way it works this time:  they search and search through the signifying labyrinth, only to find a vacuum at the center. How freaking po-mo is that?) They do manage however to trace the account that created the website back to a hospice bed, where a thirteen year old with locked-in syndrome named Ronny Spangen has been using a brainwave controller hooked up to the internet to create the Londes persona and the whole Scratch movement.  Because he doesn’t have a body any more, he wants to create a world where no one else does either.  Which, I mean… we’re supposed to accept the boy as a tragic figure, and to an extent we do.  But that’s some straight-up supervillainy right there.  Whenever you come across plans of the form “Because I had to [X], the whole world should have to [X],” you want to be nodding and smiling, and frantically dialing 911 behind your back.  Jet handcuffs the kid — this is a pretty poignant image, right? 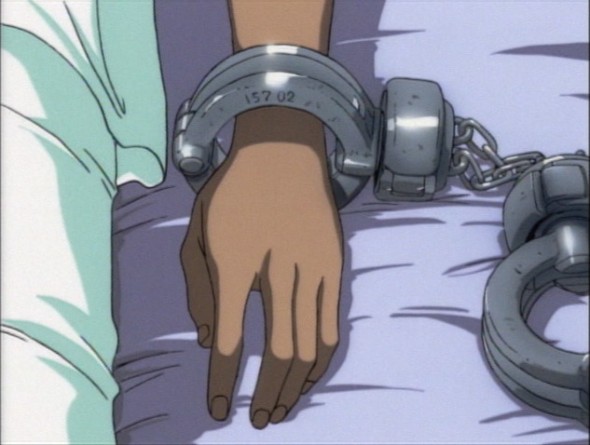 Symbolic of something. Not sure what.

— and Ed disconnects his terminal from the internet.  This happens none too soon, because at the same time Spike is facing off against the wall of TVs that got Faye, and learning that his brilliant strategy of shooting bullets at the screens is no match for Londes’ nerve-hacking voodoo.  (You may remember this plot, or something like it, from such recent episodes of Cowboy Bebop as Pierrot le Fou.  Again, there’s no suggestion that Spike ever really learns, or particularly wants to learn, the true nature of the ass he’s trying to kick.)  Now, in one of my early posts I pointed out that Cowboy Bebop is full of awesome things that don’t make a lick of sense.  Londes’ Best-Buy™-Franchise-of-Death is one such.  What is the point of this place?  Is it literally a venus flytrap for bounty hunters, to keep them from finding out about Ronny?  It’s vaguely plausible that Londes would want to make something like that, kind of, but to have the corpses just be left lying there?  Look, I’ve seen <strike>a corpse or two in my day</strike> an episode of CSI or two in my day, and let me tell you:  corpses STINK.  Eventually, that alone would have brought in the Swat Team and toppled Londes’ whole little empire.  But again this is really a nitpick…  The show runners weren’t trying to think of a logical plan, they were trying to creep out the audience.  And speaking for myself, the image of a big room full of corpses that just went to sleep and never woke up again certainly got the job done. 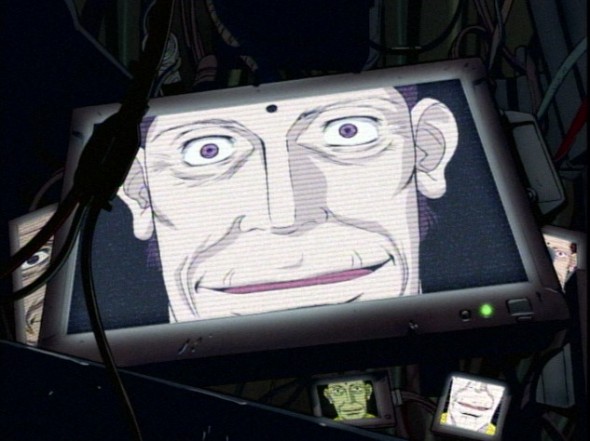 As did this image, come to think of it.