Male nudity is one of the last great taboos in movieland. Oh sure, female nudity still raises eyebrows, but people think of The Piano as A) a surreal anti-patriarchal love story, and B) “that film where you see Harvey Keitel naked – like, NAKED naked,” never mind about Holly Hunter. Yes, there’s something about the on-screen penis (the onscreenis, if you will), that our culture can’t process. It’s not an event that happens in a movie, it’s an event in its own right.

And that’s even more true when the nudity is combined with violence. Read on for a survey of cinema’s greatest Naked Manfights.

Warning 2: While I haven’t included any images that you couldn’t broadcast on NYPD Blue, it miiiight be best to read this one on your home computer. 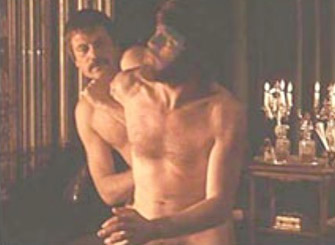 The Pugilists: Oliver Reed and Alan Bates, back when they both were strapping young specimens.

Nature of Cinematic Experience: Deliberate, carefully choreographed, lovingly shot. Surprisingly violent at the beginning: they’re doing Judo on a hardwood floor, and when Reed gets dropped on his back the foley artists throw in a wince-inducing crash. Towards the end, the pace of the action slows down considerably and the two men pretty much just writhe, grunt, and sweat. (Mind you, this is also true of most actual wrestling matches.)

Homoerotic content: Faaaabulous! Slightly before the fight, Reed admits to Bates that he had long since given up finding “one… woman… who would make [his] life complete,” and afterwards Bates tells Reed that “you and I are spiritually and emotionally close, so it’s only natural that we should become physically close as well.” From the way it’s shot, the audience is pretty much left to decide for themselves whether this is a sexualized fight scene, or just a sex scene that starts as a fight scene.

Homophobic Content: None that I could detect. Their relationship is a little weird, but presented as a good thing… although, as in Brokeback Mountain, one of the men has to die tragically to make it acceptable to the wider audience.

The Dongs: Bouncing freely in the firelight. 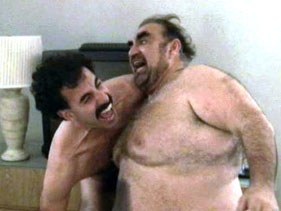 The Director: Larry Charles, but I think we can pretty much blame this on Baron Cohen.

Nature of Combat: Two friends coming to blows over a woman – fighting with intent to harm, but without will to seriously injure.

Nature of Cinematic Experience: Awkward, improvised, intermittently hilarious, but surprisingly dull (which indeed could describe the rest of the Borat film). Shot in cinéma-vérité style with extremely long unbroken takes, forcing the audience to confront the unpleasant spectacle.

Homoerotic Content: Opportunistic. The fight begins when Baron Cohen finds Davitian committing an act of self-abuse to Baron Cohen’s picture of Pamela Anderson, which would seem to confirm the hetero credentials of both men. But the two characters clearly have a deep and meaningful emotional connection… and although the fight is really never anything other than a fight, they both seem to be craving some kind of physical contact.

Homophobic Content: Ambiguous. The film gets a lot of mileage out of culture clash, exploring the hilarious shenanigans that those crazy Kazakhs get up to, and the most “hilarious” shenanigan of all is “a naked man touching another naked man.” So although it’s mostly Kazakh-phobic, it’s also pretty homophobic on a deeper level. But one wonders whether the audience is even in on the joke here. Is Baron Cohen just mocking US for finding this kind of thing amusing?

The Dongs: Tastefully obscured by black censor bars (or occasionally, in Davitian’s case, by stray rolls of fat). By the way, either Sacha Baron Cohen is loaded for bear, or the guy who drew in the censor bars was trying to flatter his way into a pay raise. 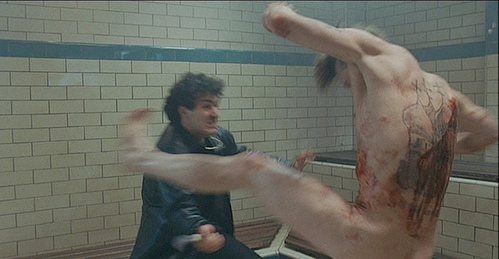 Nature of Combat: Knife-wielding Chechen hitmen learn a hard lesson about who you should try to stab in a bathhouse. (Here’s a hint: it’s not this guy.) Bloody, dirty, to-the-death.

Nature of Cinematic Experience: Action packed, exceedingly violent, brutal to the point where it stops being fun. The editing and to a certain degree the fight choreography are clearly inspired by the Bourne movies.

Homoerotic content: Slim to none. There is no eroticism of any kind in this film… or in any film of Cronenberg’s that I have seen. On the other hand, one of the people who ordered the hit is an evil closeted gay mobster who earlier in the film is shown to have a serious thing for Viggo. So you could look at the scene as a kind of violent seduction by proxy, if you were so inclined. Which I guess, having typed that, I am.

Homophobic content: The abovementioned evil closeted gay mobster sums it up pretty nicely. Mind you, that mobster’s severely homophobic father is portrayed as even more evil, so it’s not like the film’s politics are unambiguously regressive. (They’re just ambiguously regressive.) Also, repeat the “homophobic content” entry for the Borat movie, but replace “Kazakhs” with “Russians,” and “hilarious” with “creepy,” and remove any suggestion that the filmmakers were trying to get us to consider our own prejudices. (Credit to Mr. Levin, whose comment to this effect inspired this whole post.)

The Dong (solitary): Briefly glimpsed during tumbles and high kicks. Neither lingered on nor covered up. Nominated for an academy award.

7 Comments on “Balls Out: Great Naked Manfights of Cinematic History”