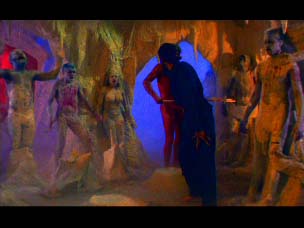 But eff the plot.  What draws me to these films, and keeps drawing me back, is not the narrative but the visual and philosophical sensibility.  The color sequence in Corpse gets me every time, even now that I know it’s coming.  (The first time I watched it, alone in my living room, I literally stood up in unconscious excitement like George II listening to the Hallelujah Chorus.)   As for the philosophy, what attracts is not that it’s well thought out – because it’s not, nor does it really try to be – but that it’s deeply felt.  How many horror films would make room for a soliloquy like this one? Delivered, mind you, by the writer/director himself, and in the high declamatory style.  Imagine Brian Blessed.

Lenita!  Antonio!  Rodolfo!  All dead.  I did it for you, Terezinha.  You’ve forsaken me.  You didn’t give me a son.  You’ve doomed my bloodline to extinction.  I want a son!  Damn you!  Damn you!  Curse your faith!

[Zé pauses, stares into the distance.]

Terezinha!  Come out of nowhere.  Punish the crime of my passion.  Torture my flesh.  Take my soul!  Why don’t you come?  You are a ghost from the past.  Yet I feel my blood boiling in my veins.  I am alive!  Alive, do you hear?  And you are dead. Rotted!  Eaten by worms!

[Zé climbs up onto a coffin, and clings to the chandelier.]

[Lets go of the chandelier, grabs a crucifix off the wall and brandishes it.]

O, symbol of ignorance! [Tosses the crucifix aside.] Where are you, Satan? Lies!  Lies!  May the earth crack open!  The skies be torn!  I want the end of the world!

[Grabs a bottle of wine and takes a healthy swig, spilling it all down his front, then chucks the bottle aside.]

I challenge your power!  I deny your existence!  Nothing exists but life!  Nothing is stronger than my disbelief.  Destroy me!  I have no God.  If he exists… I want proof!  Liiiiiiiiiiiiies!

(The English translation of this last line is a paltry substitute in this case for the three-syllable Portuguese original:  Meeeeeeen…..tiiiiiiiiiiiii…..raaaaaaas!)

I don’t know that Marins actually believes these words he’s putting in Zé’s mouth.  Indeed, if anything the films point to Zé being wrong:  in each case his nihilistic atheism is answered with supernatural retribution.  And yet, and yet… One of the interesting things about the hell sequence in Corpse is that Zé is never actually tortured.  He’s dragged down to hell, but then left to his own devices.  Wandering around, he sees a variety of damned souls and demonic tormentors, and then Satan on his throne, laughing and watching the spectacle.  Satan is played once again by José Mojica Marins.  Now, remember, Zé do Caixão spent the first two thirds of this movie doing exactly this.  Watching people be tortured is his idea of a good time, so the idea that he might get to do this forever should be good news.  Instead, it provokes another chorus of “Meeeentiiiiiraaaaas!”  Marins seems to me to be a person who keenly feels the absence of God, and rails against that absence.  That’s a kind of disbelief, yes, but not atheism as it is generally understood, and certainly not what we get from Zé.