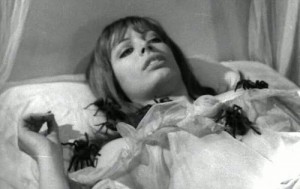 So yeah, At Midnight I’ll Take Your Soul and This Night I’ll Possess Your Corpse are wonderfully strange and strangely wonderful.  This is not to say that they are perfect.  The way that Zé behaves towards women is honestly gross, even for a horror film.  Which is saying something.  A couple of slight caveats are in order:  first of all, Zé’s violence isn’t quite as single-mindedly misogynistic as the summaries above suggest.  There’s a lot of man-on-man atrocities too – it’s just that they tend to be more or less incidental to the plot, so I left them out.  Second, and more to the point, Marins has gone on record saying that Zé’s views on women are not his own. And I more or less believe him. And yet… as with the religious subtext it’s impossible to separate the director and the character completely.   This is most evident in Marins’ signature “scare” images, which consist of shots of some sort of vermin – tarantulas, snakes, etc. – crawling around on the body of one of Zé’s victims.  These sequences blur the line between reality and fiction in a fascinating way.  Even in the most gruesome of the modern horror flicks (Saw, Hostel, et. al.), we know that the effects are just that:  effects.  The violence in Marins’ movies is similarly staged, and the sexual violence (each film that I’ve seen contains one rape) is only implied.  But the animal shots?  That’s a real spider walking around on a person’s real body.  Just as the character is being tortured by Zé, so too the actress is being tortured by Marins.  Of course, the actresses were all paid, had the option of walking off the set, and were not subsequently murdered, so we can’t take the metaphor too far… but we can safely say that these sequences flirt with becoming oddly sexless S&M porn.  This doesn’t change the moral calculus — again, the actresses signed up for it, which makes all the difference. Furthermore, we don’t know how creepy they actually found the process.  Some people (like me!) are terrified of spiders, others will handle them willingly.  But there is something feverish and raw about these scenes.  I feel uncomfortable and faintly ashamed when I observe them.

And what a powerful, rare, surprising reaction that is to a film!  When I defend my affection for horror movies to people who are not fans, I often make some kind of noise about how the genre’s extremities (of emotion, of subject matter, of imagery) destabilize my general sense of what can and can’t be, and even more so what should and shouldn’t be, and therefore can take me out of myself.  If that’s really the point, than Marins’ films succeed in the way that few others ever have.  I suppose it’s a little unpractical to suggest that you all go out and watch one this Halloween, considering how hard they are to come by in the US… well, Soul is on Netflix, but not streaming so that’s too late anyhow.  But the next time you’re up late channel surfing, if you happen to come across one of these a peculiar titles, you owe it to yourself to watch at least a few minutes.  If nothing else, you can use them as a yardstick for just how disappointing Hammerhead: Shark Frenzy really is.