The academic film critic Jeffrey Sconce has an essay called “Movies:  A Century of Failure,” where he complains about the inability of trash genres like horror and sexploitation to live up to their own tawdry promise.  When you come across a film called Nude For Satan (Sconce’s example) or Hammerhead: Shark Frenzy (a SyFy original picture I somehow conned myself into watching), you’d better keep moving.    These things tend to have zero budget and even less ambition… and while cheap can be made to work, but there’s no correcting for lazy.  Even when the filmmakers do make a genuine effort, how can the actual film, be it ever so gonzo, possibly live up to the outré dreamscapes promised by the title? 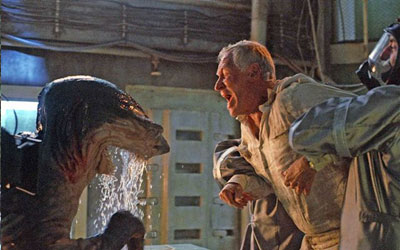 Actually, the production stills for this movie still look pretty awesome. Don't be fooled: it's shite.

Sconce is not being totally fair, here, and I wonder if he’s one of those writers who does not fundamentally enjoy the texts he makes his living discussing.  But I do see where he’s coming from.  I mean, Hammerhead:  Shark Frenzy! The mind boggles.  WHAT, is that COLON, doing THERE?  When we learn what the film is actually about (some hooey about genetic engineering run amok), and what the titular man-shark hybrid actually looks like (insufficiently frenzied, I tell you what), it is kind of a letdown.  Still worse, though, are the many scenes not featuring the shark:  dull, bad, expository scenes, establishing important details about dull, bad, flat characters, all written, acted, and lit with the utmost level of bland professional competence.  It’s just so normal. Answer me this, SyFy Original Pictures:  if I wanted normal, if I was after normal, would I have ever sat down to watch a film with that title?

But I did not come here today to speak of Hammerhead: Shark Frenzy.  I came to speak of another horror film, one of my favorite horror films — perhaps not the most fun to watch, perhaps not the most thought provoking, and certainly not the most professionally made, but a film which I cannot but watch whenever it is aired (roughly once a year around Holloween, thanks to the IFC network), and a film at which I cannot but smile whenever I am even reminded of its existence.  This film of which I speak is called This Night I’ll Possess Your Corpse, and it is not one iota less balls-out nuts than that title would suggest.  That is the highest praise I can offer it, and the most succinct summary.

A slightly less succinct summary would run as follows: