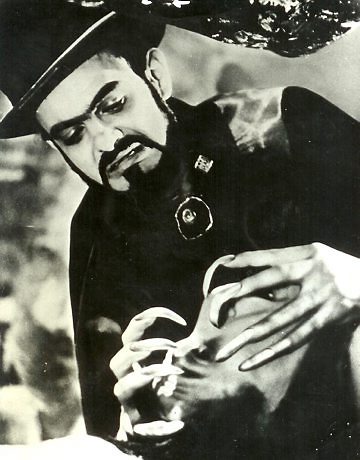 Zé lives in a small town in Brazil, where he works as an undertaker (earning him the name Zé do Caixão, usually translated in English as “Coffin Joe”).  He wears a top hat and an opera cloak wherever he goes, and sports an impressive unibrow, protruding ears, and grotesque, clawlike fingernails.  (And yes, those are the real fingernails of writer/director/star José Mojica Marins.  He grew them out for the part over the course of several years, so Christian Bale and Robert DeNiro can pretty much suck it.)  Other than cultivating his unique fashion sense, Zé has two related interests, the first of which is atheism and the second eugenics.  These are not necessarily related, mind you, but for Zé they definitely are.

Because there is no afterlife, you see, men only live on after death through their children, or as Zé obsessively keeps putting it, through their “bloodline.” Therefore the only thing that matters in this life – more than your career, more than your friends, and certainly more than such piddling considerations as morals, laws, or basic human decency – is creating a genetically perfect offspring. And to do that, of course, Zé needs to find the perfect woman — this, incidentally, seems to have nothing to do with her chromosomes, but rather with her personality:  she needs to be as coldly nihilistic as Zé himself.  (Don’t ask me how that’s supposed to be passed down, man:  first of all, I didn’t write it, and second Zé is obviously deranged.) This search for a breeding partner is Zé’s defining motivation across multiple films.  This Night I’ll Possess Your Corpse (1967) is a sequel (cum remake – see below) of an earlier film called At Midnight I’ll Take Your Soul (1963). Both are well worth watching, but Marins had a broader canvas to play with in Corpse, and unlike most directors he actually rises to the occasion.  Marins made a third Zé do Caixão film, Embodiment of Evil, in 2008(?!), but I haven’t seen it, as it’s not yet widely available in the US.  (I’m sure I could track it down if I tried, but part the charm of the Zé do Caixão films, for me, is their status as these inexplicable found objects that I stumble across while channel surfing late night TV.  I’m sure I’ll stumble across Embodiment of Evil in due time.)  In any case, judging from the trailer [warning: NSFW, and where are youtube’s censors on this one I wonder?], Zé is still up to the same old tricks.

In the first film, Zé murders his insufficiently perfect wife, Lenita, and then kills his best friend, Antonio, so he can get at his friend’s fiancé, Terezinha.  When she turns him down, he rapes her. Rather than bear his “perfect” offspring, she hangs herself.  Driven mad by guilt, and by what he sees as Terezinha’s betrayal, Zé slams down a bottle of rum, wanders out in the woods screaming half-baked atheist philosophy at the top of his lungs, and is visited by a parade of vengeful ghosts (which appear as a blurry negative print — kind of a neat effect). What with one thing and another, he ends up dangling upside down with his face torn off.  The End. (No, I’m serious:  that’s the last shot of the film.)

In the second film, Zé kidnaps an assortment of potentially perfect women, who he then puts through a series of tortuous “tests” in his elaborate basement laboratory, sort of like a horrific version of that ABC show The Bachelor.  (More horrific, like.)  Against all odds, Zé eventually finds not one but two women who fit his criteria and are willing, even eager to fulfill his loopy vision of immortality through better breeding, but one of them turns out to have flaws after all, and then she gets possessive, and the other eventually ends up miscarrying. Driven mad by guilt and by the failure of his elaborate plans, Zé has a nightmare where he is dragged out of his bed, bodily carried to a graveyard, and sucked down into hell (shot as a few minutes of garish technicolor in an otherwise black and white film — kind of a neat effect), screaming half-baked atheist philosophy the whole time.  When he wakes, still deranged, he ends up wandering out to drown in the pond where he disposed of his victims’ bodies.

These plots are clearly riffs on the same formula, yes.  But it’s not any recognizable formula.  “Boy meets girl — Boy loses girl — Boy gets girl” is not in any immediate danger of losing its seat to “Horrific crimes — rant about the nonexistence of god — visually distinctive supernatural sequence — violent death.”  There are a couple of obvious precursor texts, Don Giovanni being the big one, but Marins pretty much owns this narrative territory at this point.  And if it’s a little clunky, it feels organic and personal in a way that a more polished Hollywood product would not.  It’s like staying at a funky little bed and breakfast vs. staying at a Holiday Inn.  Or, well… it’s like the difference between Zé do Caixão’s fingernails and Freddy Krueger’s glove.  The glove is more artful and competent, but the fingernails are waaaaay creepier.