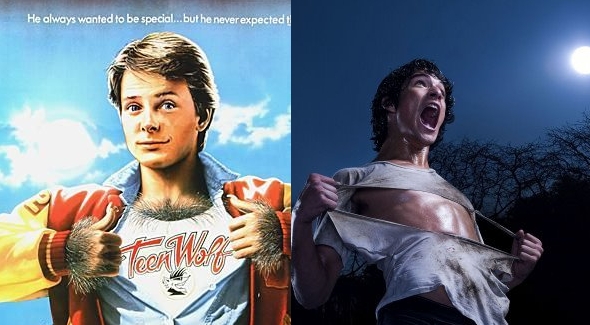 It seems more or less obligatory that a website so concerned with rehashing the popular films of the 1980s should have an opinion on MTV’s big-budget rehash of Teen Wolf.  With that in mind, I sat down the other day to watch the pilot episode, which was… fine, I guess, but not all that interesting, which is why this post is about twelve hours behind schedule.  The one aspect worth systematic overthinking is the radical shift in tone from the original franchise to its modern reworking, which is neatly captured by these images: 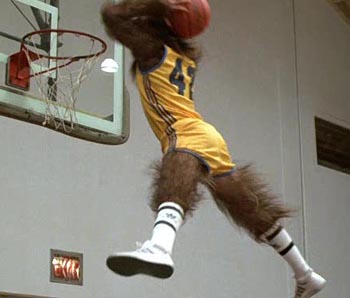 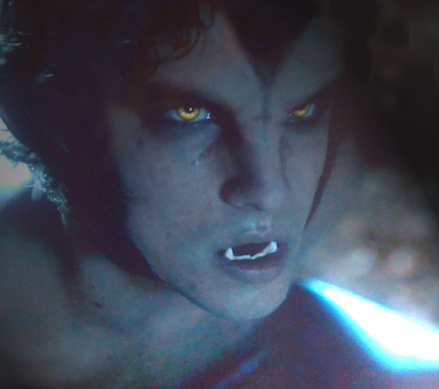 Special effects have come a long way in twenty-five years, right?  Except they haven’t.  There’s nothing going on in the modern version that’s beyond the capabilities of 1980s technology.  Take a look at Ron Perlman in Beauty and the Beast — that’s Rick Baker working in 1987, just two years after the original Teen Wolf came out, and it holds up as well as anything I’ve seen since (unfortunate wrestler-hair aside). No, the crapulence of the original makeup is a conscious choice, designed to highlight the central theme of the movie, to wit, that puberty is gross.  The old Teen Wolf movie is fundamentally about being unhappy with the very bodily nature of one’s own developing body.  It’s not body horror in the classic sense, where what you are becoming is abominable and terrifying to look on.  Rather, the monstrous body is funny looking. Not terrifying but mortifying, embarrassing.  Teen Wolf is also about getting past that – realizing that along with funny odors and hair-every-which-where, puberty also maybe gives you some enhanced basketball skills.  And maybe members of the opposite sex aren’t as weirded out by your new body as you are yourself. And eventually once you’ve grown up completely, you start shaving and wearing deodorant, and your testosterone-crazed fight-or-flight reflexes calm down a little, and you make out with your childhood friend rather than the unattainable cheerleader type, opting for love and companionate marriage rather than a more juvenile romance based on lust and status. (But that always felt a little tacked on, to be honest:  after all, they didn’t call the movie Teen Not-Really-a-Wolf-After-All.) 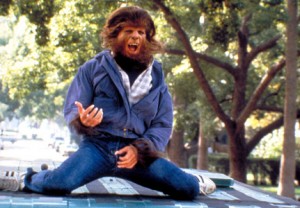 Hey Chuck Barry! Listen to this!

The new Teen Wolf is very different.  By making the wolfman dreamy (or if not exactly dreamy, at least cool looking), they are changing the game rather dramatically.

There’s an interesting scene in the pilot where the titular teenwolf is dancing with his designated love interest, and her proximity causes an uptick in his heart rate which almost triggers his metamorphosis. This is a not-so-subtle metaphor for becoming, uh, conspicuously aroused, which can be a real issue for teenaged guys when they are dancing with girls that they like (or at, you know, any other time of the day or night).  It’s really, really, really not a subtle metaphor.  His reaction is to run off and take a cold shower.

But heavyhandedness aside, this is interesting.  In the original movie, this would have been fodder for the comedy of humiliation.  Oh no!  SHE’S GOING TO REALIZE THAT I HAVE AN ERECTION!  Must… fight… embarrassment!  And the important lesson, of course, is that eventually you have to realize that these sexual drives are part of who you are, and if the girl likes you enough she’s not going to mind even a little.  But in the darker and edgier Teen Wolf reboot, the threat is not that she’s going to notice — rather, it’s that he’s going to lose control and tear her limb from limb.  Taking its (deeply sexist and problematic) cue from the Twilight series, Teen Wolf: The Next Generation suggests that teenaged boys are seething cauldrons of hormonal lust that are always a whisker away from exploding into a whirlwind of passionate, bodice-ripping… well, rape.  There’s not a nice or polite way to put it; that’s what the subtext is about.  And it’s meant to be sexy, which is kind of gross.  (Although do let’s recall that this well-worn fantasy, where the guy loses control due to the woman’s overwhelming sexiness, has but NOTHING to do with the motivations behind actual sex crimes.)  It’s also interesting that in the TV show, the hero’s first clue that something is happening to his body is the development of lacrosse-based superpowers.   So where Teen Wolf Classic is about learning that puberty has a good side, Teened By The Wolf:  The New Class is more about learning that the personality traits that make you a big man on campus also have their ugly side.

And this, by the way, is where the show loses me.  Because I find most of the “good side” of the protagonist’s wolfification pretty ugly to begin with — there’s nothing wrong with enhanced senses or physical speed in and of themselves, but he quickly and cheerfully uses his gifts to turn himself into a fratty douche.  The character’s name is Scott, but I kept wanting to call him Chad, or possibly just “Broseph.”   Who knows, maybe over the course of the series he’ll learn a valuable lesson about not being a hyper-competitive Type-A jagoff all the damn time.  Something very much like that does happen in the original, if I recall.  But unless that process starts reeeaaal quick, I don’t think I’m sticking around to find out.

Anyway, the similarities between Twilight and Teen Wolf:  The Chaddening have led me to determine the following formula for writing paranormal romance.  (Did you know that Twilight knockoffs are officially a genre now?  Yeah.) It basically works like this:

Step 1:  Select a classic movie monster.
Step 2:  Make the monster wicked hawt.
Step 3:  Identify one of the the underlying social anxieties represented by the monster, and
Step 4:  invert it,
Step 5:  in a way that tends to reinforce societal norms of romance.

Step 3:  Forget all the Marxist werewolf class-conflict stuff brilliantly exposed by Shechner here.  The big anxiety in this case is lack of control over our own bodily nature. Puberty is gross.

Step 4:  But in this case, the Teen Wolf has MORE control over his body, at least most of the time, which is what allows him to become an awesome lacrosse superstar, a ladies man, and an incredible bowler. Because, you know, dogs are so good at all of those things.

Step 5:  Getting bit by a wolf in this case has pros and cons.  The pros are:  being good at sports, loving the ladies, being more assertive and competitive.  The cons are — well, the con IS, I should say, that you might lose control over your manful sea of testosterone and do sex at your lady friend.  And I’m sure that just like with Twilight, they will find a way for this apparent con to get turned into a pro — having uncontrollable lusts will be okay, as long as it happens within the duly sanctioned confines of marriage, or true love, or going steady, or whatever.  (They’ve already floated the idea that there’s just one special girl out there who really gets the hero’s tail a waggin’.)  A similar approved outlet will probably be provided for the character’s anger issues and his overdeveloped sense of competition.

Twilight, just for the record, runs thusly.  (Oh, and spoilers, I guess.):

Step 3:  An interesting one.  We often hear vampires talked about as a metaphor for sex, or for old-world aristocratic power structures, or disease.  But I think it’s instructive to step back — and if nothing else, I’m glad I read Twilight because it provided this perspective — and consider the Dracula story from Mina and Lucy’s point of view.  They aren’t doing anything special or wrong at the beginning of the story. Well, maybe Lucy’s a bit of a flirt, but they’re still within the bounds of Victorian propriety.   Then along comes this strange, unappealing man, who wants to do horrible things to them.  Completely unprovoked!  There’s no rhyme or reason to it, all they had to do was be female at the right place and time, and suddenly they’re a target.  And yeah, there’s a certain horror to that.  I doubt that this accurately reflects modern female anxieties about male attention, and I wouldn’t even really want to bet that it’s an accurate portrayal of the female Victorian mindset.  But it’s DEFINITELY something that Victorian men such as Bram Stoker were worried about vis a vis the women they felt responsible for (sisters, daughters, etc.),  and there’s still plenty of of that rather specifically patriarchal sentiment floating around in our popular culture today.

Step 4:  But in Twilight, of course, the attention of strange monstrous men is entirely benign.  Because the Twilight-pires have teh moralz, you see, and possibly teh Jesusez.  So all he wants to do is hold your hand, sparkle in the daylight, and whisper sweet platonic nothings into your oh-so-fragile ear.  Even though he could tear you apart like a pack of tissues any minute, and is having trouble stopping himself from doing that because he is such a sea of throbbing hormones, you are totally safe.  (And of course it’s not like Bella ever gets special attention from a guy she finds desperately unappealing.  It’s all hotties crushing on hotties, here in romance land, even if in the end there can only be one.)

Step 5:  The crucial difference between this and Dracula, however, is that Edward’s attraction to Bella has nothing to do with her being female at the right place at the right time.  Rather, it’s a sign that the heroine is magically predestined to be with her special vampire boo for ever and ever, and a sign that the werewolf third leg of the triangle is magically predestined to be with one of her as-yet-unfertilized ova, which — hey, is there a reason why he didn’t fall preemptively in love with Edward as well?  Presumably half of Renesmee’s very special DNA is floating around in his sparkly vampiric sac, no?  But I’ve already answered my own question:  Jacob doesn’t fall in love with Edward, because that would not reinforce the societal notion of romantic love, and as we’ve established that’s against the rules of paranormal romance.

With this in mind, I offer a few treatments for Twilight and or The Teen Wolf Reloaded style reimaginings of other classic movie monsters.  With these in hand, writing the next smash hit paranormal romance novel will be easy!  Feel free to help yourself to any of them, just be sure thank me in the author’s note.  And if you do end up getting to quit your day job when your magnum opus shoots to the top of the New York Times Bestseller’s list, consider buying an OTI t-shirt.