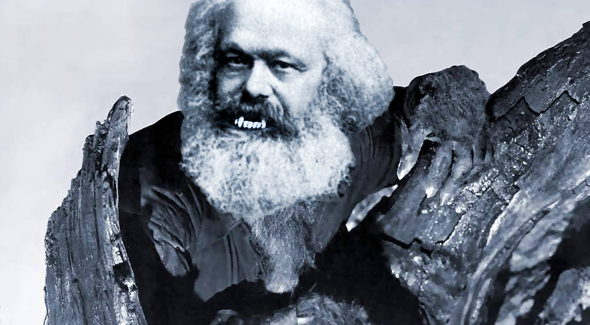 Karl Marx: Even hairier than the Wolfman. Coincidence... OR IS IT!?

[I want to thank Professor David Graeber, whose anthropological dissection of Buffy the Vampire Slayer (and accompanying lectures) very much forms the basis of this post.]

Let’s begin with two observations. First: the Vampires that inhabit our most recent pop cultural works differ so dramatically from the classic archetype of Golden-Age Hollywood that they are are almost unrecognizable. Second: Werewolves are lame.

Or at least, compared with their undead, blood-sucking, vaguely-Carpathian cohort, werewolves of late have occupied a far less enviable position in the collective pop cultural landscape. These are not the subtle, nuanced, infinitely malleable characters vampires are–the sort capable of carrying their own novels, TV-shows, Movies and crappy Movie-Tie-In Video Games. Rather, lycanthropes end up as the stock types passively added to spice up a Vampire vehicle. Sure, some immortal genius might figure out a way to breathe new life into the old dogs, but for now, Buffy’s Oz remains a werewolf’s best case scenario. In the worst cases it’s… well… I’d rather not say.

However, there is something to be said about the sheer frequency with which werewolves pop up in Vampire works. Is your horror-story turned teen-abstinence-parable getting a bit too stale to survive a sequel? Throw in some werewolves! Is having a psychic heroine dating a vampire proving an insufficient allegory for southern race relations? Make her boss a werewolf! At least…sorta’. The point is, as the length of a Vampire epic approaches infinity, the probability that the spinning “let’s throw in a different kind of monster” wheel will stop on “Werewolf” approaches 1. And it does so far earlier than all of the other forms. As the old aphorism goes: no ghosts, witches, reanimated corpses, mer-people, vengeful pagan gods or giant, radioactive slugs before werewolves. And for heaven’s sake, NO MUMMIES.

The delicious exception that proves the rule.

Yet–and this is important–despite the number of appearances Werewolves (or the equivalent) make in predominantly Vampire (or equivalent) works, the converse is never true, because Werewolves remain lame.

But why? What is it about our culture that causes us to perpetually dwell on one classic occult figure, while paupering the other of such attention?

The answer, of course, lies in the failure of Marxism.