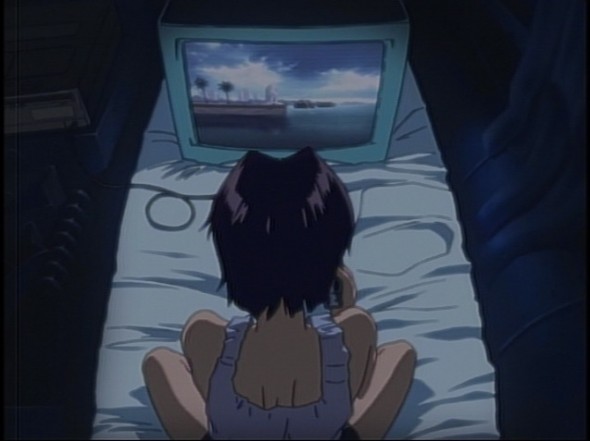 Hard Luck Woman opens with pretty much the same image that Brain Scratch closed with:  television.  Some details are different, of course…  it’s Faye watching, rather than some anonymous audience, and rather than watching a communication from Londes, or the general deadening blitz of modern media, she’s watching that mysterious betamax tape she got a hold of in Speak Like a Child.  (As you probably remember, this is a time capsule tape that Faye made for herself when she was in high school – and due to her amnesia, it’s her only record of her life pre-cryosuspension.) Differences notwithstanding, the resonance is pretty unavoidable, especially when the camera zooms in and focuses on the blurry grain of the CRT image. 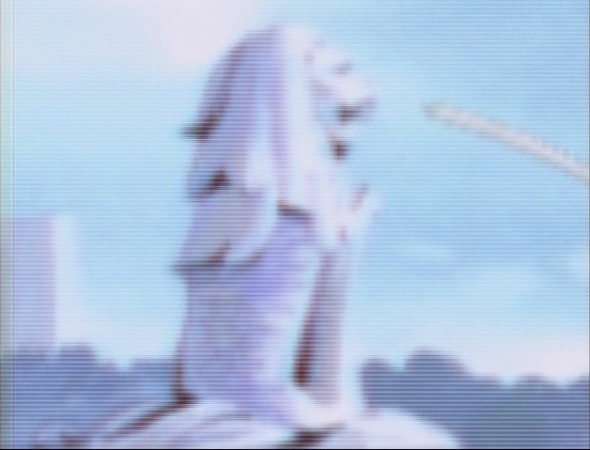 I wonder if that effect was as striking back when most people were actually watching Cowboy Bebop on cathode ray monitors?  Come to think of it, although Faye is obviously watching an old school TV to go with her old school VCR, I’m not sure the CRT blur in Brain Scratch even makes sense.  Don’t they usually watch TV on their little floating holographic view-screens?

But all of that is beside the point.  What matters about this scene is that it establishes (with wonderful economy, relying almost entirely on lighting and body language), that Faye has been staying up night after night watching the tape over and over, scouring it for something — anything — that will jog her memory and lead her back to her forgotten past.  Obsession, nostalgia, futility… this much is pretty standard Cowboy Bebop stuff.  What’s interesting is that this is the only time we’ve ever seen any of the principal cast members devote energy to something for more than a single episode.  It’s not like this is the first element from an earlier episode to pop up again — as I’ve said before, the show trades HEAVILY on recurrence, and of course there’s the continuing plot of Spike’s backstory.  But the thematic resemblances are only approximate, and Spike doesn’t dash off in pursuit of Vicious and/or Julia unless he happens to stumble across them.  This is the first continuing plot element that has any kind of agency behind it:  Faye is watching the tape because she hasn’t given up on her past. She has a long-term goal and she’s taking active steps – if faltering and repetitious ones – to achieve it.  This will all end in tears, naturally, Bebop being the kind of show that it is.  But given that Faye’s first and only instinct for the main bulk of the show has been to cut and run as soon as the going gets tough, this probably counts as an astonishing milestone in her personal development.

While she’s lost in thought, Radical Edward appears at her shoulder in a way that would be frankly horrific if Ed was the OTHER kind of creepy feral child.  Faye freaks out a little and tries to cover up the video.  But she changes her tune when Edward lets on that she recognizes one of the landmarks. 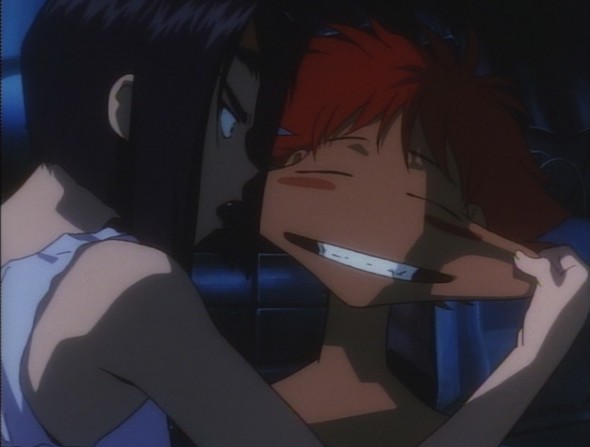 At this point, Faye goes all Jack Bauer on her ass.

Well.  All that Edward actually says is “Waterfall” (or “water sploosh,” in the subtitles), which is just a one word description of what’s on the screen at the time.  Now, Japanese is a strongly pro-drop language, so maybe there are subtleties to which I am not privy.  But doesn’t Faye’s decision to interpret this as “[I recognize and know how to locate the] waterfall,” seem like a hell of a stretch?  In a different show that would have been intentional, and Faye would learn a valuable lesson about not jumping to conclusions or assuming people mean what you want them to mean.   In Bebop, where the plots run on high octane contrived coincidence, it turns out that this was EXACTLY what Ed meant.   So Faye learns nothing.  It’s just as well that she doesn’t seem like the maternal type, because she’d probably run into some trouble down the line:

21st-century analogue of Dora the Explorer:  Can you say “backpack?”
Baby:  “Baappa!”
Faye: “WHAT?  Baby, are you saying you know where the backpack is?  Take me to it immediately!!!  THIS I COMMAND!”

But maybe I’m being too hard on the show… it’s possible there’s more to this exchange that takes place off camera.  The next action we actually get to see, after the title card, is Spike and Jet waking up to learn that Faye has diverted the BeBop to Earth and gone AWOL overnight.  (Their reactions are laconic and crotchety respectively, but you probably don’t need me to tell you that by this point, right?)  Of minor interest here is the fact that we get to see Spike brushing his teeth.  In one of the early comment threads, there was some discussion of whether Cowboy Bebop should be thought of a slice-of-life anime… I still think it’s a little too action-packed to qualify, but I’ll grant that you don’t usually get this much information about an action hero’s dental hygiene. 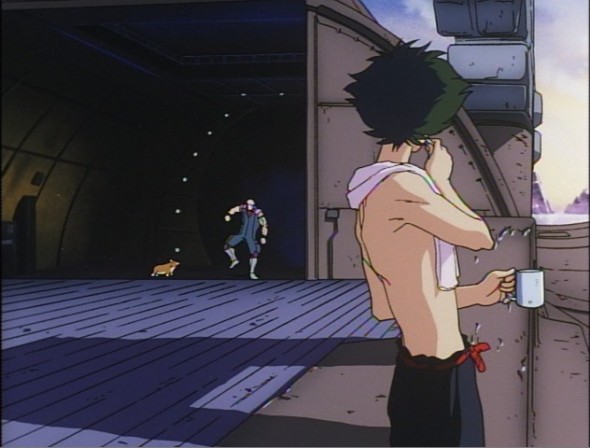 Judging from Jet's pose in the background, I think Ein left a little "souvenir" on the flight deck, if you catch my drift.

And then, over a delightful hard rock track that sounds for all the world like a slower-burning version of Heart’s immortal Barracuda, we’re introduced to this mysterious fellow. 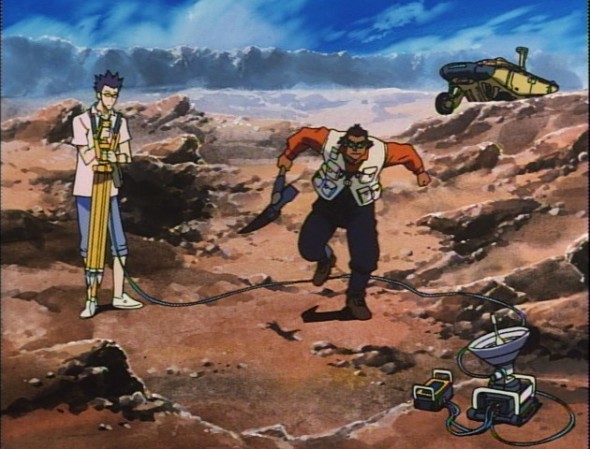 Later on, we will learn more about him, for instance that he is the bounty head of the week, and that his name is Appledelhi Siniz Hesap Lütfen (which is apparently phonetically identical to the Turkish phrase for “Excuse me, check please”(?!)), and that he is Radical Edward’s long-lost father.  But for now all we know is that he has some kind of operation going on that involves the meteorites that keep crashing into earth.  This is vaguely sinister, perhaps?  Although he seems a little cheerful for that to apply, and the fact that he’s actually running around exploring the blast craters himself rather than watching it all on a monitor somewhere (while stroking a cat, for preference) seems to establish him as a salt-of-the-earth type…  It’s definitely mysterious, though.  No getting around that.  And at this point the stage is set for the episode’s two plotlines.  Faye is going home.  Edward is finding her father.  Act break. 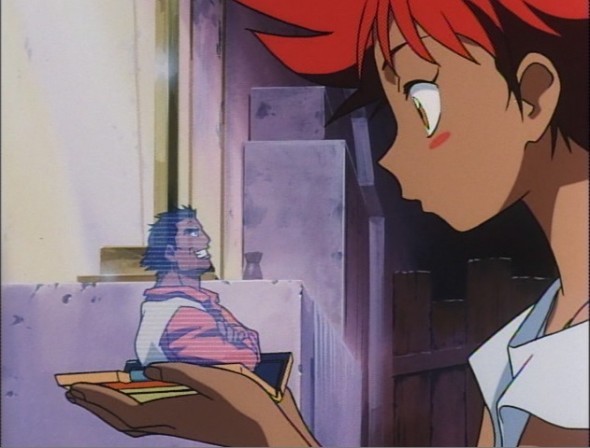 The first time we see Ed see her father. Again with the CRT blur!