Radical Edward: Okay, so first of all Jet and Spike?  You guys are no longer on notice.  Carry on.  Radical Edward was apparently a boy in early drafts of the script, but was made female in order to create gender parity.  To the writers’ credit, all they changed was her gender:  she is refreshingly androgynous, and mostly just reads as a child.  It doesn’t really create parity, though (or make up for the more absurdly fan-servicey aspects of Ms. Valentine), because while Edward features about as heavily as anyone else in the main titles, she hardly qualifies as a main character in the show itself (at least in the episodes I’ve seen so far), usually popping up for a scene or two to provide comic relief.  Anyway, in addition to being a computer hacking genius, Edward seems to be functionally insane.  Like a lot of cloudcuckoolanders, she fluctuates between the twin poles of “acts crazy but actually knows more than she lets on” and “acts crazy and desperately needs Thorazine.”  I could have done with a lot more of the former and a lot less of the latter, although at times her wackiness is a welcome tonic to Spike’s moping.  Edward probably has a Tragic Past in that her family is not in the picture, although it’s hard for her to be all mysterious about it when she’s so busy being craaaaaazy!!!  I’ll say this for Edward:  she is not petulant.  It is probably hard to be petulant when you have the word “radical” right there in your name.  Unless it’s the political kind of radical, because a lot of them are pretty petulant.  And actually, it would probably be fun for those of you who have already watched the whole run of Cowboy Bebop from start to finish to go through it again pretending that Radical Edward is actually a Marxist agitator.  It would make a… fairly surprising amount of sense. 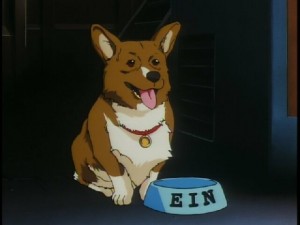 Ein: A Pembroke Welsh Corgi that may or may not be super-intelligent.  Like Ed, Ein is there more for comic relief and color than as a major character in his (or her?) own right.  The only character other than Jet that seems to have a sense of responsibility or to be capable of warmth, and, unsurprisingly, the only character other than Jet that never grated on my nerves.  If they ever wanted to make a sequel that was just about Jet and Ein palling around the solar system, I would be so there, man.  Ein also has a Tragic Mysterious Past.  Ha!  I am kidding.  Or am I?  Honestly, I probably am.  But I wouldn’t put it past the show’s writers.  Ein shares a special bond with Edward and likes Jet, but usually ignores Faye and Spike which (again, when I first started watching), is sort of what I would do, given my preference. 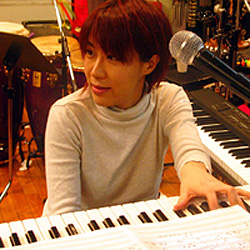 Yoko Kanno: The show’s music director and composer.  She doesn’t feature appear onscreen (although the character design of Edward is apparently based on her to some degree) but she’s easily as important to the show as any of the characters, and to a large degree is why I kept watching the show even though I didn’t take to it at first.  The music for Cowboy Bebop is outstanding, both as music qua music and in the way that it’s woven into the show.  Part of the reason I’m writing this series of posts is to sketch out some preliminary thoughts for an essay about the show’s music that I might try to get published someday.  So you can expect to see a lot about the music in the coming weeks.  Get excited for that (or, you know, consider yourselves warned).

Beyond the core group, there are a few recurring frenemy characters who show up every now and then to advance the overarching plot, and a greek chorus of old drunks that seem to pop up in every bar and restaurant to provide local color.  Typically, though, the show is just about putting Spike, Faye, and Jet through their paces with a different supporting cast.  The basic ur-plot goes like this:  Act One introduces us to a gang of interstellar criminals, Act Two shows our heroes tracking them down,  Act Three is a chase or a fight, and in the denoument – this being that kind of show – the bounty gets snatched out from under their noses.  (For all that they’re fearsomely competent, the crew of the Bebop kind of suck at their job.)  Wash, rinse.  Repeat.

There’s been a lot of talk on this blog in recent weeks about whether TV shows should be episodic or serial.  Cowboy Bebop is kind of an odd duck here.  For the most part, it’s completely episodic.  Every now and then you’ll get an episode that moves the overarching plotline forward, but they are few and far between, and always feel like “very special episodes.”  Despite this, the show does seem to be building towards something.  And the way that it builds is through repetition and recurrence.  Themes, motivations, and bits of character business keep on popping up again and again and again and again, until they aquire a significance that is somehow more than the sum of its parts.   The main reason that the show wasn’t working for me, at first, is that it takes a while for this approach to build up a full head of steam.  But the fact that all this repetition eventually winds up feeling rich, rather than lazy, is what finally made me decide that Cowboy Bebop was a great show after all.  The experience that it most resembles, oddly enough, is George Herriman’s Krazy Kat.  If you read one Krazy Kat strip – which should be easy enough to do online – you will probably say something like “Ok, the art is original and amazing, but I don’t understand why I was even supposed to find that entertaining.”  Read a dozen or so – which will probably mean tracking down a published collection – and you will fall head over heels in love.

This constant, cyclical variation on a few fixed elements can be – and has been – seen as analogous to jazz, possibly explaining the title’s “bebop.”  Mind you, it’s easier to explain the title as a random combination of rank Americanisms chosen for exotic effect, sort of the equivalent of an American show getting a title like Godzilla Kabuki.  (Note to self:  am sitting on goldmine with this Godzilla Kabuki thing.  Put in call to Bruckheimer.)  There’s a lot of this kind of thing floating around the background of Cowboy Bebop.  I mean, consider the name of the main character:  Spike Spiegel.  In English, this is a pretty silly name, but otherwise remarkable.  In Japanese – the language the show was written in – consonant clusters and the letter L do not exist, so the main character’s name is actually Supaiku Supiigeru. I’m sure that part of the point was to come up with a name that is hard to pronounce in Japanese:  the more foreign it sounds, the better.

Anyway, that’s probably enough for tonight.  This has run long already.  Check back in two weeks for an analysis of the first five episodes.  If you want to take issue with my harsh description of the characters, sound off in the comments.

But as Mlawski did in her posts on Lost and Battlestar Galactica (which you may consider me to be very, very sincerely flattering here), I am issuing a general ban on spoilers in the comment thread for this post.  It’s a little bit more relaxed for this column, in that – for the most part – this show is not concerned with long-simmering pots of mystery soup.   Like I said before, the show does build to something, but it’s not an organic or teleological process:  instead it builds through the accumulation of tiny details.  This makes it largely spoiler-proof, in the same way that you cannot exactly spoil Wallace Stevens’ “Thirteen Ways of Looking at a Blackbird” by blurting out “Guys!  The twelfth way is from the blackbird’s point of view!”  I’ve already done a teensy bit of spoiling right here in this post, in that I’ve described major characters that don’t appear in the first episode.  Still, there are a few big mysteries, so stay away from those.  And if in doubt, it’s probably best to assume that it is a spoiler.