Okay.  Deep breath.  I have three points that I want to make here, and I don’t really have time to integrate them, or expand on them as much as I’d like to.  Next post I write about this, I’ll probably spend less time recapping the episodes and more getting into the analysis, because honestly, the people who have read this far will have already seen the series, and anyway the name of the site isn’t Overdescribingit.

So yeah, apparently I couldn’t make it one full post into this series before I alienate everyone by talking about Lacan.  But this is Lacan-lite, I promise.   Jouissance is a French word that’s a little difficult to translate:  it means something like enjoyment, but with faintly racy overtones.  Maybe ecstasy would be better, although jouissance doesn’t carry the same connotation of an extremely strong sensation.  In Lacan’s psychoanalytic theory, jouissance is what we feel when our carefully constructed symbolic representation of the world slips for a second and instead we experience the world as it actually is.  It’s not necessarily a pleasurable sensation – it can take the form of fear, nausea, boredom, or what-you-will – but jouissance works as a descriptor because there’s that hint of animalistic irrationality about it.  (Now, there’s a LOT that’s wrong with this description, especially the phrase “the world as it actually is,” but there’s not much to be gained for our purposes by going into more detail.)  For people who write about aesthetics from a Lacanian perspective, jouissance becomes a really critical concept, because you can make the argument that creating moments of jouissance is what Art, big-A Art, is really all about.  This idea (or something very much like it) is actually quite a bit older than Lacan:  don’t we all pretty much accept that art speaks to the emotions or to the spirit first, and the intellect second if at all?

My take on Cowboy Bebop has to do with those strangely detached action sequences.  The episodes are neatly divided:  on one side, you have the plot, characters, motivation, and all the other rational elements of narrative fiction.  On the other, you have these extended set pieces that are about nothing more (and nothing less!) than looking and sounding cool.  And the sense of exhilaration and excitement that these scenes can create when they’re done well is pure audio-visual jouissance.  You get this most obviously in the fight scenes, but not only there.  The best example, for me, comes from Stray Dog Strut, where Abdul Hakim is chasing Ein through a market and stops to throw fruit at him. 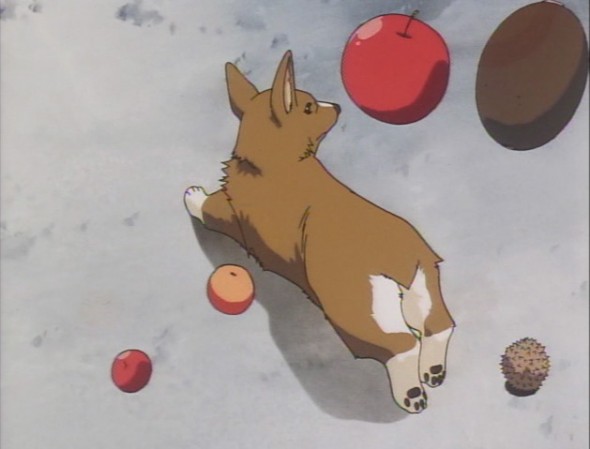 Dog with Field of Descending Fruit: A Still Life

This picture doesn’t really get the effect across at all.  What makes the segment truly surreal is the way the fruit moves, because it’s not really in the same three dimensional space as the dog.  None of it hits him – none of it even hits the pavement!  Rather, it just moves from the top of the screen to the bottom of the screen.  All of this is over in a second, so when you’re watching it you don’t have time to realize what’s weird about the motion. You just register it as weird, as motion that’s outside of the symbolic framework that governs our sense of how things are supposed to move. And this – call it jouissance, or anything else – is what makes the scene work, and arguably what makes the show work. 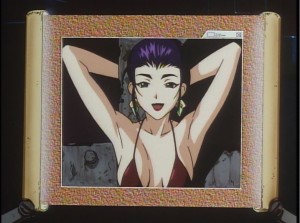 And while we're on the S&M tip, let's not forget that they've found an excuse for Faye to get tied up like this in all three episodes she's been in so far.

In any work of art, there’s a power dynamic between the creators and the audience.  The writers control what the audience sees, and when.  Some are very kind:  showing the audience what they want to see whenever they want to see it.  Some make us work a little more.  The creative team behind Cowboy Bebop are some sadistic controlling bastards. I don’t mean that they make the show unpleasant to watch.  I just mean that the constant withholding of critical information and images is part of what makes the show what it is. Consider the stuff they keep back: 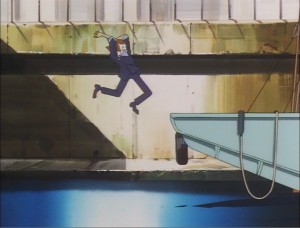 At least we got to see the dog kick him in the face.

The most interesting version, again, comes from Stray Dog Strut.   At the end of one of the chases, Spike and Abdul Hakim confront eachother on a bridge.  They’ve both been established as unspeakably badass martial artists.  Surely we’re in for the kung-fu fight of the century, right?  Remember, this is the second episode, and a big chunk of the first episode was devoted to kung fu, so at this point, it looks like Cowboy Bebop is basically a kung fu show.  Especially since this episode has been dropping references to Bruce Lee and Game of Death at a rate of about one per minute.   So what happens?  Well, they fight for a second or two.  But the camera stays focused on Ein the whole time.  All we see is their feet shifting around, and occasionally zipping out of frame as one of them tries for a roundhouse kick.  Okay, but surely that’s just the teaser, right?  After all, that was in the first act.  The final act will have the kung fu battle to end all kung fu battles, right?  Wrong.  Abdul Hakim crashes his car and gets arrested without confronting Spike again. 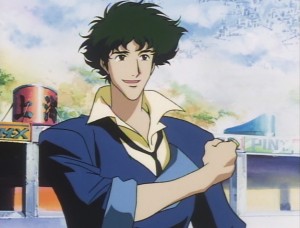 Isn’t it interesting how different Ballad for Fallen Angels is from everything that came before it?  This is maybe the most obvious point to make about the show, but no less worth making.  It’s the first episode where we learn anything about Spike’s past.  It’s also the first episode where he kills people.  (In the earlier fight scenes, he would cheerfully jumpkick a guy with a machine gun, apparently just for the fun of it.  In this one, he just shoots a whole bunch of people, and he’s quite businesslike about it.)  It’s the first episode where Spike displays emotion about anything or anyone other than himself:  whether he goes to rescue Faye because he doesn’t want her hurt or whether he just wants a chance to kill Vicious is an open question, but either way someone’s getting through to him.  More trivially, it’s the first episode where the title card doesn’t have music (instead we get the sound of Vicious’ pet bird squawking), and I think the first where the little graphic that tells us we’re coming back from the commercial break doesn’t get any sound at all.  It’s certainly the first episode where the awesome action scene has no music.  The big musical set pieces here are reserved for the moments before and after the attack:  Spike marching into the church and falling out of the window.  During the fight itself, all we hear is gunfire.
So basically where the first four episodes are light, even frothy, the last one is as serious as a heart attack.   In fact, it’s so serious that it almost wraps its way around to being silly again… or at least, serious enough that it violates narrative causality in that wonderful jouissance-provoking way. The “In the Rain” song in the video above is a great example of this, as is the scene in the opera box.  When Faye turns and sees Mao Yenrai’s corpse, propped up in a chair with blood smeared down his face, eyes open as if he was watching the show, I don’t mind telling you that a chill ran down my spine.   So as different as this episode is, it is still recognizably Cowboy Bebop.  It still does trade on these little moments of surrealism.  It still does have a bad-ass action sequence.  It does still end with the honky tonk piano riff established in episode three.

In the comment thread for the last of these posts, Mlawski said that the story of Cowboy Bebop develops more like music than like a traditional narrative.  Let’s lean on that metaphor a little.  When you’re making an extended musical form, you only have two basic tools:  repetition and variation.  That is, each time you write a section of music, you have the option of 1) doing the same thing you just did again, and 2) doing something else.  A third important technique (really just a version of the first two) is to do something, do something else for a little while, and then bring the first thing back.  This is grotesquely oversimplified, but whatever.  It does tend to play out in the way that actual musical forms work, whether it’s something relatively simple, like an ABAB song form, or something relatively complex, like Sonata form, which I would need a whole other post to even inadequately explain.  The point though, is that it’s possible to make interesting and important shapes even if you never alter your basic building blocks at all, and even if the blocks don’t have “meaning” in the same way that stories typically have meaning.

Okay, so you see where I’m going with this, right?  If Cowboy Bebop was a piece of music, the first four episodes would be variations on a single theme.  The fifth episode would be a contrasting theme.  We can probably expect a tug of war between these tendencies to play out over the duration of the show — possibly within individual episodes, but more likely (I’m guessing) between the different episodes.  We’ll get a light one here, a dark one there, etc. and the pattern of light and dark that this creates will eventually determine the overall shape of the series.  It will be interesting to see which one wins out in the end… and also whether there are any episodes that don’t fit into either category.

All right.  Nothing more to see here, until you add it in the comments.