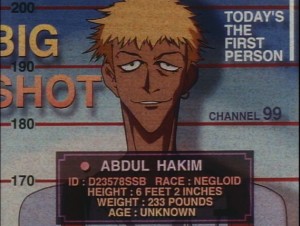 The Bounty of the Week is Abdul Hakim, a serial pet thief.  He’s stolen Ein, an extremely valuable “Data Dog” – if you’re confused, don’t worry, because I checked wikipedia and they NEVER explain what this means – and as a result there’s a whopping price on his head.  Spike and Jet don’t get the bounty, but they do wind up holding the dog.  Who is apparently worth millions.  And they know this.  But selling him never occurs to them.  So apparently Ein can control people’s minds?   I dunno, he is pretty cute.  This episode has tons of weirdly specific references to the Bruce Lee movie Game of Death – also known as “The one where Bruce fights Kareem Abdul Jabbar.”  There’s also a weird, grating moment where Abdul Hakim’s ethnicity is referred to as “Negloid,” which I guess is less problematic to the original Japanese audience, but to Americans reads as a kind of recursively racist combination plate of insensitive description of African heritage and insensitive depiction of Japanese accent. On the bright side, it also contains my favorite supporting character so far, who I call “Turtle-head-black-market-pet-store-lady.” 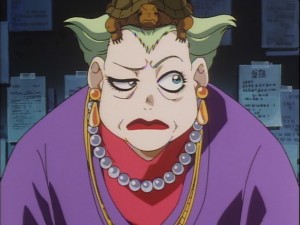 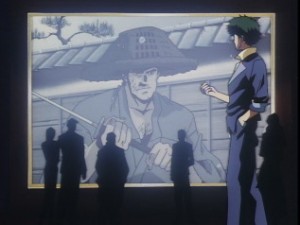 At the casino, Spike wanders past a movie screening. I include this image here only because I think it's cool; I rather expect that this is also why they included it there.

Here we meet Faye Valentine.  All we learn about her so far is that she’s good at cards and cultivates an air of mystery, because already in this first appearance we hear two flatly contradictory accounts of what her deal is.  She’s in deep with the mobbed-up owner of a deep space casino, who is using her to facilitate the turnover of a secret encryption key hidden inside a poker chip carried by a courier with the same hair color and same one suit that Spike always wears by… aaaaAAAAGH! so okay, you’re seeing what I mean about parts of this show not making any damn sense.  The mafia guys want the encryption key to be turned over in the course of a poker game to avoid attracting attention, so presumably it’s incriminating for them to ever be in the same room as the courier.  But they have no problem kidnapping, torturing, and whacking said courier when the deal doesn’t go down as planned?  And rather than just have the guy bet the chip on something and lose, they plan for him to start gambling, win huge, blow everything but the chip on one last hand, and then offer it to the dealer as a tip?  And then, rather than use their most trusted dealer for this plan, they use a notoriously unreliable outsider that they brought in because of her quasi-mystical skill at cards – quasi-mystical skill which, remember, is totally useless because the guy isn’t even supposed to bet the chip in the first place?  What. Ev. Er.  Credit where it’s due, though, the climax – where our heroes make a failed and double-crossy attempt to sell the chip back to the mobsters – is a tremendous set piece, with some seriously excellent zero-gee choreography and another badass hard-driving jazz cue to go with it.  At the end, the mobsters blow up their own ship. Faye waltzes off with the money, because in this episode she’s a guest character:  one episode later she will join the Bebop’s crew, and never succeed at anything ever again. Spike and Jet end up with the chip, but rather than sell it and become millionaires, they decide to just get rid of it, presumably because the technology is too dangerous to fall into the wrong hands.  Specifically, they decide to hide the chip by wandering into another casino and betting it on roulette.  Which is poetic, but — if you’re really committed to keeping the technology out of the wrong hands — like, really, unbelievably stupid when compared to other options such as flinging the chip into the pitiless vacuum of space, or into the sun, or hell, just smashing it with a hammer.  Yeah, what better place to lose a chip than in a casino, I know, but if space casinos are anything like the Vegas kind, those chips are all labeled, so finding the encryption chip is less like looking for a needle in a haystack and more like looking for a needle marked “Luxor” in a pile of hay that’s all marked “Caesar’s Palace.”
Okay, so this was not my favorite episode.  But Faye’s an interesting character, and I guess they had to introduce her somehow.  Musically, this one is noteworthy because it introduces a little honky-tonk piano tag that will keep coming back in one guise or another in almost every episode from now on.  This is important enough that I might even transcribe it for you in a later post, but I’ve got other things on my mind this week, so let’s move on.