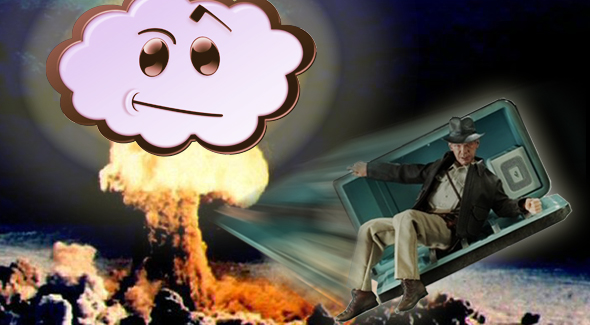 …or, How I Learned to Continue Worrying, and Fear the Bomb.

We must accept here a paradox, which is in fact admitted by everyone with the greatest of ease, and even consumed as proof of modernity.  This paradox is that an excess of speed turns into repose.

Sweet mother of Zod, Indiana Jones and the Kingdom of the Crystal Skull.  Why have we returned to this place, you and I, for yet another round of scrutiny?  What remains to be said about Crystal Skull that hasn’t already been belabored and enumerated Ad SupraCogitum so many times before?  Years ago, I’d feared that Indy IV would become for we pop culture geeks what the 2000 elections were for we liberals: a trauma so fundamental and so distracting that the ensuing rage threatened to blind us from the greater travesties that ensued. Yet thankfully, as time and–forgive my stereotyping, here–Dr. Pepper began to heal our collective psychic wounds, it seemed that our uproar had burbled down to mere grumblings, and eventually to quiet acceptance.

However, it seems that amidst our crowd of socially awkward neck-beards dwelled a supremely vocal fan who  just couldn’t let sleeping dogs lie.

Really, George?  I mean, really?  You’re going on record as saying that odds of riding out a nuclear detonation in a lead-lined frigidaire are approximately 50/50?  Half?  You’re saying–no, I’m sorry–you think that a “lot of scientists” are saying that the answer to atomic holocaust is to run duck-and-cover drills in our fridges? That, were Nipponese architectural tradition to have favored lead crates over bamboo pagodas, the entire city of Nagasaki would have been pretty much groovy? Is it possible that you’re so accustomed to working with stupendous bombs that you’ve lost respect for their destructive power?

Uch, look what you’ve made me do.  I’ve resorted to punning, George. Punning.

Well, as OTI’s resident Professional Scientist, this is a tossed gauntlet that I simply cannot overlook.  Or let go un-picked-up. Or, whatever it is one does with tossed gauntlets. (BL2+ waste, maybe?). For your own good, and in the good name of the Scientific Community at large, I think it’s time we administer a little bit of tough love. I’m going to subject this blanket statement to the most dehumanizing, soul-hollowing process a normal person can withstand without suffering permanent psychological damage:

Do I expect some sort of apology?  No, Dr. Jones.  I expect you to die.