I spent an inordinate amount of time trying to pick my favorite cliches from the 84 comments we received. Most comments had multiple entries. So in total, we got hundreds and hundreds of cliches (approximately half an episode of 24). It took me hours to write this post; the fact that there was absolutely no prize at stake makes it all the more embarrassing.

But in all seriousness, I’m astonished at how clever you all are. There were many fantastic lines that had me giggling on the subway, and I’m sure that if I sat down to do it again I’d pick a completely different set of cliches. So basically, feel free to disregard this post entirely.

Okay, here are my favoritest lines for each cliche: 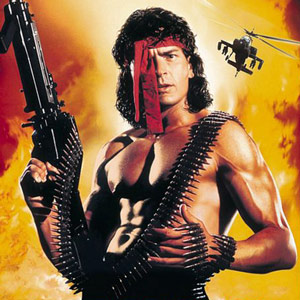 This one wins mainly because I love those movies. There’s a lot of dumb jokes, but they’re good dumb jokes. And there are a lot of smart jokes, too. In Hotshots: Part Deux, Charlie Sheen is heading up a Vietnamese river. He’s surprised to see Martin Sheen heading downriver, reprising his Apocalypse Now role. The two men look at each other and simultaneously yell, “I loved you in Wall Street!” Credit where credit is due: that’s all kinds of awesome.

This isn’t the funniest one, but there’s something appealingly plausible about it. I can imagine this actually being used in an action movie. The bad guy has the good guy at gunpoint, no chance of escape. But with this maddeningly cocky bon mot, even the most rational bad guy is going to drop the gun for some good old fashioned wire fu.

3. “In case I accidentally make a joke about your weight after I drink this bottle of Jagermeister, there’s something I want you to know. I’ve always thought you have a great personality.”   – Mike from LA

I’m not surprised Mike is from LA – this is a perfect sitcom line. Mike, file this one away for your Simpsons spec.

4. “You’ve never given up on anything in your life! Now stand up and quit this stupid “Who Can Lie Down The Longest” contest!”   – Sappy404

There were a lot of entries for this one that involved giving up. This one get the thumbs up because it’s doubly reflexive, riffing on both quitting and standing up. By the way, Sappy404 also wrote the one about Hotshots. Way to go, Sappy404: you are the King of Meta. Go rent Adaptation.

But there’s another #4 I had to single out:

4. “You’ve never given up on anything in your life! Now stand up and win this Murderball game!”   – Bob 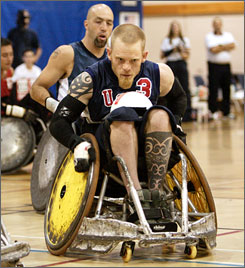 This is really really great. Murderball, of course, is a sport you play in wheelchairs. So technically, standing up is a surefire to lose the game (by disqualification). But in another way, anyone who stands up during a Murderball game is a winner in a way that far transcends the game.

I love this for two reasons. First, there’s the juxtaposition of the compassion of the first line and the monstrous selfishness of the second line. But it also got me thinking, what makes somebody not fit to eat? Is the guy poisoned? Diseased? Wasted away? If the situation is so dire that you’re eating people, where are you drawing the line between edible people and inedible people? Food for thought (rim shot).

6. “If I play the word DIVERSE with the D on that double-letter score, they will have an easy shot at those two triple-word squares. And I won’t let that happen.”   – Ray the Recovering Cynic

This brings back fond memories of Stokes’ old “Board Games That Would Make Great Movies” post. My mother and sister play Scrabble at least as seriously as Jason Statham acts, so I am totally feeling this mashup. “This summer… tile be back.” Eh?

7. “Only a hurricane downing that tree, knocking over the fence and releasing the only tiger ever trained to walk on fire can save us now.”   – Hooloovoo 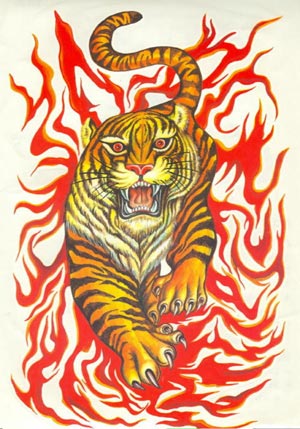 Callback to Number Five. Love it.

As Shana wrote me: “I need to know! Who is this character talking to? A fish man? A genetically-engineered man-chicken? A guy who looks suspiciously like Mr. Peanut?” I’m imagining some sort of horror comedy where slimy creatures crawl down your throat to take over your brain. Oh wait, I saw that one. Recommended, by the way.

9. “In every man’s life, there’s a time to separate moments into dichotomies and a time to acknowledge that life is perhaps too complex for such gross oversimplifications. I feel like going to a nice restaurant and having a bite to eat. Who’s with me?”   – Joel

Way to turn the cliche into a stinging rejection of cliche. Got to admit, I have a fondness for the ones that sort of deconstruct the form. Speaking of…

10. “What do we do now?”[dramatic zoom]”We come up with a tagline that suggests endless sequels like “The end begins” or “The end of the world… starts now” or “The apocalypse is only the beginning” or… don’t interrupt me! This is what I get paid for…”   – Chris

I actually had a pretty cute one for this: “What do we do now? [dramatic zoom] “We?”

We’re not done quite yet. I have to tip my hat to five clever commenters who submitted full slates of ten cliches with one theme.

4 Comments on “Clichemageddon: The Reckoning”