So waaaay back in February, I mused over the scene in Raiders where Indy apparently stows away on a Nazi submarine.

What is going on here? Are we meant to believe that Dr. Jones somehow snuck onto the sub, found a hiding place, and stayed unnoticed for however long the trip to Secret Nazi Island was? In the comments of the original post, some people assumed that the u-boat just cruised on the surface the whole time. It’s true that we never actually see the thing go underwater. However, in my sub movie experience, the only time you hear that klaxon is when you’re preparing to dive.

At the time, the Sub Controversy remained unresolved. But part of Overthinking™ is continuing to think about something well beyond the point at which any reasonable person has moved on. And recently, I had an epiphany: what the hell are those guys saying?

I contacted several German speakers and had them watch the clip above, to translate what the Nazis are talking about. They agreed on two things:

Just to make sure, I checked out Cswap, a website which archives movie captions. Here’s their subtitles for the sub scene: 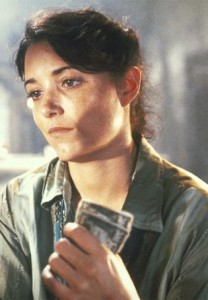 I have no clue how SHE makes the trip. Shoved in a torpedo tube?

Okay, so that solves the mystery of whether the sub goes underwater – it does. But we still have no idea how Indy manages to make the trip undetected. The only logical explanation is that he stows away inside the sub, even though this approaches “nuking the fridge” levels of implausibility.

And then, another epiphany: why not just consult the actual script for Raiders, which is conveniently available online?

This is a shooting script, and it actually differs quite a bit from the finished film. For instance, in this screenplay, after the Nazis open the ark, it doesn’t kill all of them on the entire island. Indy and Marion have to grab the ark and make their escape via… a crazy minecar chase.

So according to the script, how does the sub scene unfold? Well, the boat starts going under, but stops when just the top of its periscope is breaking the waves. Indy clings to the scope and gets dragged along. He then uses his whip to actually tie himself to the periscope, where he dangles for the entire trip, watching as shark fins circle him. Finally…

The submarine has stopped. The water is calm. The moon
is bright. A gentle swell splashes Indy awake. He blinks,
tries to regain his senses. He makes an inventory of his
body. Surprised to find himself intact, his spirits lift.
Some hidden reserve of energy flows through him. He frees
his aching arms from the wet leather of his whip, leaving
only one loop around his waist to hold him to the sub. He
rubs his hands and stretches. Once again, he has survived.
To fight again.

There are actually a couple photos that prove this sequence was at least partially shot. 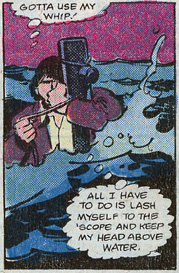 Now, one could argue that since the periscope ride never made it into the film, it isn’t really “canon.” For all we know, it was left out of the final cut because Spielberg and Lucas decided it was too silly, and would rather you imagine something else. But this is probably as close to an explanation as we’re gonna get.

By the way, it turns out that someone else on the internet has already been overthinking this scene. In fact, he’s scanned the official comic book, which depicts the whole periscope riding caper as it was originally scripted. Go to the above link and scroll halfway down for a nice little nugget of hardcore geekiness.

BONUS OVERTHINKINGIT: The IMDB “Goofs” page for this movie has an excellent point – there is probably no way they could have fit the ark onto a WWII-era sub. Have you seen those hatches? Maybe if they’d taken the ark out of its crate and turned it on its side. Maybe.

25 Comments on “The Mystery of Indy’s Sub Ride Solved”