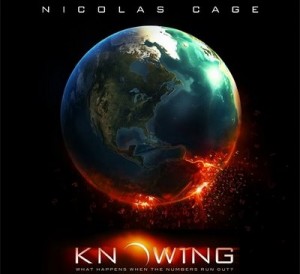 I bet you KNEW there was a plane crash in this movie. Weird, huh?

When we walk into a theater, we usually know a fair amount about the movie we’re going to see. For instance, I haven’t seen Transformers 2. But from the trailer, I know that Sam Witwicky goes off to college and absorbs some sort of alien code from a mysterious artifact. I know that Optimus Prime fights in a forest, and it probably doesn’t go well for him. (There’s something about the way Shia yells “Optimus!” that reminds me of the way Ewan yells “Noooooooooooo!” in that Star Wars: Episode I trailer I memorized in 1999.) I know that Megatron returns. I highly suspect that the final sequence takes place at the pyramids.

(By the way, someone remind me to make a list of movies in which ancient Egyptians had direct contact with aliens: Transformers 2, Stargate, The Fifth Element…)

This is all right there in the trailer—it’s information the studio wants me to have. Depending on what other movies I went to see, I might have been shown this trailer whether I wanted to see it or not. Being surprised by Megatron’s return just wasn’t an option.

Now compare that to the District 9 trailer. (Warning: D9 spoilers ahead.) 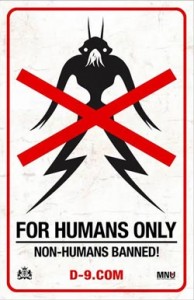 Before I saw it, I thought they had lightning for legs.

This trailer introduces you to the movie’s concept (aliens living in a militarized slum), but tells you almost nothing about its plot. After watching it, I assumed this movie was about the aliens rising up against humans. And I certainly didn’t know that the poor guy who got sprayed in the trailer was the movie’s main character. I figured he might have been a red shirt who dies gruesomely after finding a chemical weapon, after which the troops crack down on District 9 and the aliens fight back.

I was completely wrong. It’s been a long time since I went to see a movie without knowing anything about the plot, and I highly recommend it. So first of all, kudos to the D9 people for creating a great little trailer that keeps its cards close to its vest. But the thing is, I wish I had known even less. For the whole film, I was waiting patiently for the cool robot suit I saw in the trailer. When it showed up, it was glorious, but I can only imagine how happy I would have been if I hadn’t known it was coming. I can almost imagine myself saying, “Great Odin’s Raven, this movie has a badass robot suit! What an unexpected surprise!”

But at least I didn’t make the mistake of glancing at a review. Needless to say, movie reviews are way worse than trailers when it comes to spoilers. In his review of District 9, Roger Ebert revealed that the movie…

… takes the form of a mockumentary about van der Merwe’s relocation campaign, his infection by an alien virus, his own refuge in District 9 and his partnership with the only alien who behaves intelligently and reveals, dare we say, human emotions. This alien, named Christopher Johnson — yes, Christopher Johnson — has a secret workspace where he prepares to return to the mothership and help his people.

This makes me sad and mad. Smad. In two sentences, Ebert gave away at least half of the story. Not every detail, but enough to make the movie a lot less exciting for the first half.

That brings us to World’s Greatest Dad. This is a great little Robin Williams movie that’s just coming out, written and directed by (believe it or not) Bobcat Goldthwait. It’s a dark comedy, so dark that it’s not really a comedy, and Robin Williams turns out to be a great actor. I won’t drop any spoilers for the benefit of those of you who haven’t seen it, which is everyone. 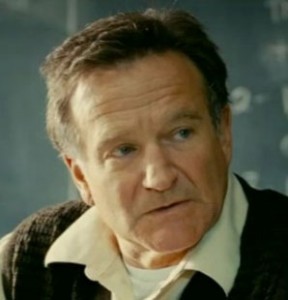 Biggest surprise in the movie: good acting from Robin Williams.

I’ll just say that the movie has a few shocking twists. Twists which are completely hidden in the movie’s trailer, but mentioned in just about every review I’ve read, from the New York Times to MTV. At the risk of being annoyingly cryptic, I was completely stunned by one of these twists when it happened, and think it’s sad that I may be the only person in America who ever sees the movie without reading anything about it, and therefore the only person who will actually be surprised.

I’m not saying anything particularly novel here. We all know that spoilers can ruin your enjoyment of a film. But at the same time, many of us enjoy reading movie reviews, and we certainly enjoy watching trailers. And with big event movies, little snippets blanket the entire internet. I knew Batman was going to ride a cool motorcycle a year before I saw The Dark Knight. I knew the ending to Watchmen was going to be different than the comic book. And of course, I knew Leonard Nimoy was going to show up in Star Trek. Everyone in America knew that one. But if you could chose not to know in advance, wouldn’t it be an easy choice? Wouldn’t being surprised by Leonard Nimoy be the bee’s knees?

This much is clear to me: there is nothing you can learn about a movie beforehand that will heighten your enjoyment of the movie. Trailers can certainly heighten your anticipation, and make you count down the days before you can line up and gladly wait three hours to be the very first to see something. But the tradeoff is, you know what’s coming. You know that at some point, Iron Man is going to shoot a missile at a tank and turn and walk away before it explodes. So when the moment comes, what you experience is the thrill of recognition, not surprise.

And that’s why I’m going to avoid that new Avatar trailer. When I see posts about the movie online, I’m going to keep browsing. I’m sure I’ll inevitably hear a few things about Avatar before December–staying completely spoiler-free probably isn’t realistic. But I’m going to see what life as a anti-spoiler zealot is like.

Anyway, how far do you go to avoid spoilers before you see a movie? Let us know in the comments. To help you, here’s a little scale. 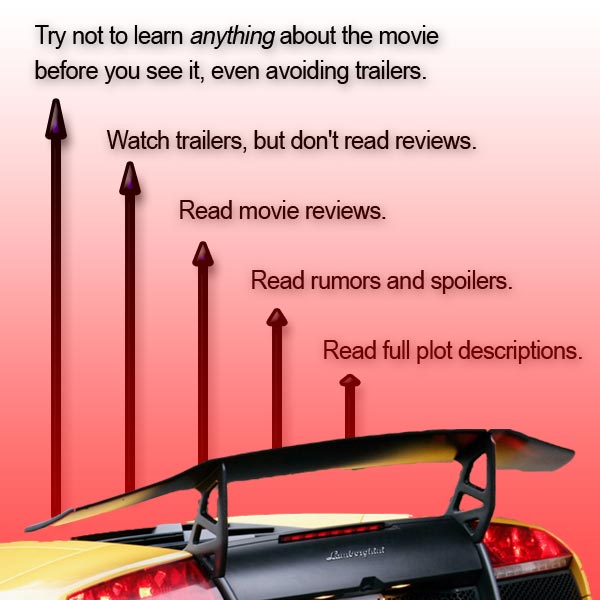 17 Comments on “How far will you go to stay unspoiled?”