Before I begin, some words of inspiration from a true master:

This is why science is so maddening for some and so great for others.

While we Overthinkers have already spent many a goodly hour dissecting X-Men: First Class and the characters therein, I’d like to take the prominence this film holds in our current collective zeitgeist as an opportunity to voice an issue that’s irked me for years, now. Stated  simply, “how do we solve a problem like Magneto?”

To be clear, I take no umbrage with Magneto’s role as sometimes-hackneyed allegory for postwar Jewish experience, his membership in the brotherhood of superpowered Hebrews (in which I one day hope to hold a rank), nor his place in the pantheon of villains who seem  superfluously haunted by the deaths of their mothers. All of these are, to some degree, excusable literary devices of the sort inevitably used throughout the perpetual re-imagining of such a long-lived character. No, my issues with Herr Lehnsherr, like most of my professional worries (and–now that I think about it–like most of the troubles with my mom) stem from basic physics.  Which is to say, the self-proclaimed “Master of Magnetism:” 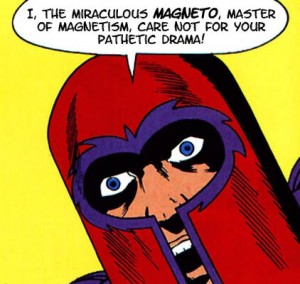 The lady doth protest too much, methinks.

…has, at best, only a rudimentary control over this awesome fundamental force.

Okay, in this example he’s also a bit of a douche, I guess.

Now, as the quote that opens this post so eloquently states, the physics of magnetism get quite a bit sticky.  It’s not that the math is hard per se (though it can be a bit daunting), nor are the results counter intuitive in the way that many quantum or cosmological phenomena tend to be.  The problem with magnetism is that so many of its aspects are immediately well-known to the common observer, and yet the intrinsic physical phenomena from which they’re borne are best explained in a fundamentally counter-intuitive manner. 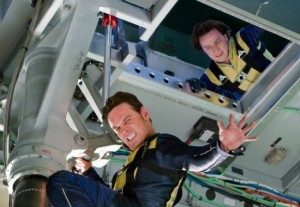 "That's right, my friend. Search your feelings; you know it to be true. Wait... Line?"

This has, of course, lead to notorious confusion in the literature. In fact even I, with my obviously formidable scientific prowess, would never be so boastful as to liken my pedagogical skills to those of Professor Feynman. Hence, this post won’t serve as a primer on magnetic theory, just a critique of the way Magneto (under)utilizes it.  Also of note: while OTI has previously featured related analysis that provided an elegant Physical Chemical model for Magneto’s powers, that work attempted to justify the apparent limitations of his abilities. I, on the other hand, recognize that the ability to control magnetism–in all of its forms and contexts–should imbue Magneto with a startling array of powers. I’m just attempting to help him realize his full potential.