Along with the distinction between creation and re-creation comes a value judgement, or at least an implied one. Ask any writer, they will tell you they are smarter than any actor. And they will be right:  actors are dumb. I kid, I kid! But I’m not the only person making the joke. Consider the characters on Friends. Chandler, the writer, is of average intelligence (as is Monica, the chef). And Joey, the actor? And Phoebe, the musician?

The distinction between the creative and the re-creative artist in the popular imagination is the distinction between mind and body, the distinction between spirit and flesh. Creative art is brain work. Motor skills are not required. (Except for basically all the visual arts. Look, I’m not pretending any of this actually makes sense.) Re-creative art, however much thought goes into it, is partially about having quick fingers, or the ability to cry on cue, or elegantly turned calves. It’s part practiced skill, part genetic lottery ticket. It never rises to the level of inspiration. Interestingly enough, within classical music circles (which is already a re-creative culture), this same stigmatization of the body attaches to singers. Consider the old gag, “Where is a tenor’s resonance? In the hole where his brain should be.” Or consider fictional composer-singer relationships like the Phantom and Christine in Phantom of the Opera. Christine is good and the Phantom bad, to be sure — but which of them is smarter? Which is weak, which is strong? Which active, which passive?

The distinction between creative and re-creative art is quite often mapped onto gender, too.

And it is in this context that I suggest we watch the trailer to Steven Soderbergh’s upcoming thriller, Haywire.

A few things are worth commenting on here, but of these by far the most interesting is the leading lady, Gina Carano, seen below hurting someone quite badly. Or, depending on your priorities, quite well. 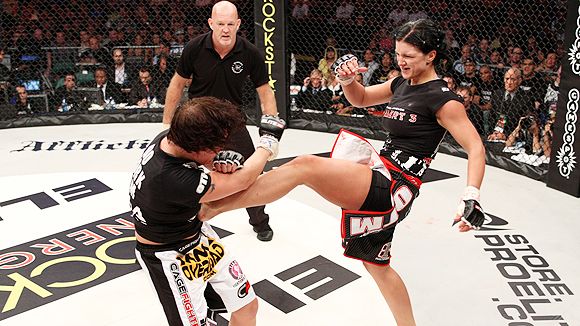 Carano is not an actress. She’s had bit parts here and there, perhaps most notably in Red Alert 3 and the direct to video Ring Girls, but nothing that screams “give me a star vehicle!” She’s primarily famous for being an MMA fighter, and hot. The bulk of the fame comes from her looks, in fact. You have to wade through two pages of cheesecake on Google image search before you actually get a picture of her fighting someone. But as a fighter, she is no slouch, having racked up a 12-1-1 record in kickboxing and a 7-1 in MMA over a three year professional career. You can see clips of her fights on YouTube, and although MMA is notoriously hard for laypersons to follow, she certainly seems to be kicking butt. That’s the gimmick, then, with Haywire. Watch people get beat up by a real badass pretending to be a fake badass. It’s classic stunt casting. Rowdy Roddy Piper would be proud.

This makes it all the more interesting that the trailer makes no reference to Carano’s fight career. Rather, it tries to sell Haywire as a straight-up action film. Some of the marketing even downplays Soderbergh’s involvement! Check out this poster, which tries to avoid contaminating your fond memories of Ocean’s Eleven with your less than fond memories of Solaris. 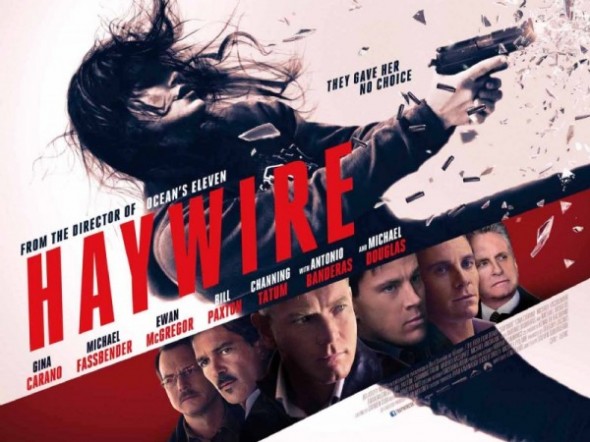 If Carano isn’t really an action star, neither is Soderbergh really an action director. He makes some very successful films, but he also makes weird ones, and does weird stuff with non-actors in particular. Typically he intersperses his avant-garde work with polished Hollywood fare that pays the bills and convinces the producers to keep hiring him. For every Ocean’s Eleven, there’s a Bubble. For every Contagion, there’s a The Good German. The presence of bankable stars is not necessarily a decisive factor. The Good German rode George Clooney and Cate Blanchett to a twenty-five million dollar loss at the box office. There’s a lot of famous names up there on the poster. We still don’t know what kind of Soderbergh film Haywire will turn out to be.

However, given that the film was shot in 2010, and probably wouldn’t be released even in 2012 if Michael Fassbender hadn’t turned into the hottest thing since toast in the interim… we could probably guess. 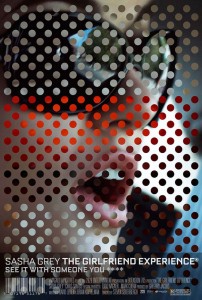 What does all this have to do with acting vs. directing? And with stunt casting? Well, most people who are paying attention will immediately peg Haywire as a sort of companion piece to Soderbergh’s art house exploitation experiment The Girlfriend Experience, which provided a non-fornicating leading role to the porn star Sasha Grey. The Girlfriend Experience tries to sell itself as a frothy, naughty movie. (Gaaagh, that tagline. So lame.) It’s actually a chilly, cerebral, vaguely boring one (although the boredom shouldn’t be thought of as a defect in this case), with Important Ideas about the commoditization of love, friendship, art, and — somewhat surprisingly — religion.

It’s also kind of a prank on the audience. Sasha Grey takes her clothes off in the film. Not very much, but she does. This is likely the reason many people end up watching the film. Why else cast a porn star? Other people who watched The Girlfriend Experience were curious about whether or not Grey could act. She does act in the film, although again, not very much. Between the nudity tourists on the one hand and the outsider-art tourists on the other, we can probably account for the film’s entire audience. Both camps got what they paid for. But both were thoroughly snookered.

Think about it. If you want to see Sasha Grey naked, why would you go to a mainstream movie? If you’re reading this, you have access to the internet, which means you have that power to see Sasha Grey naked AT ALL TIMES. Want to see her act? The internet can do that for you too. You can even see her act with her clothes on, if you’re willing to put in a bit more effort. The only reason to see The Girlfriend Experience in one of the typical mainstream cinema venues (i.e. a movie theater, a Netflix disc) is to glaze your voyeurism with a thin but expensive veneer of respectability. It just seems so much classier that way, right? Why, it’s almost exactly like paying a high-end prostitute to go out to dinner with you before you bang. Take that, audience.

And Haywire is probably going to be something similar. If you wanted to see Gina Carano hurt somebody, you could have watched that happen live ringside. But that’s not what you want, not if you’re like most of America. Rather, you want an action movie. Violence at a remove, and in a glossy package that you don’t have to feel weird about consuming. I’ll call it now:  Haywire will be too glossy and too removed. Critics will say that it’s all surface, no substance. They’ll praise the cinematography, but complain you never get a sense of who this character is beneath the surface. And that will be exactly what Soderbergh was going for. 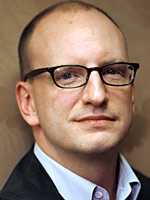 So much for what these films say about their audience. Now let’s consider what they say about Soderbergh. Like I mentioned, he seems to have a particular affinity for non-actors. This is maybe an aesthetic choice:  the man loves his affectless line readings, I guess. But there also seems to be something borderline ideological about it. Why Grey and Carano, in particular? Why give star vehicles to a professional f___er and a professional fighter, in particular, and not a fireman or a fishmonger? And why both women? (It’s worth noting that Soderbergh’s next film, which is set in the world of male stripping, does not seem to feature any actual male strippers.) I suspect that at some level, Soderbergh is trying to distance himself from the re-creative, bodily side of filmmaking as much as he possibly can. An actor or actress is still a creative artist to the degree that they create the illusion that they are someone they actually aren’t. For Grey and Carano, in their first careers, that was never the case. Porn stars and cage fighters are professional bodies in a way that most performers are not — ballet is a better analogy for what they do, actually, than either acting or music. When a choreographer is inspired by a principal dancer, we say that the ballet was “created on” the dancer. Grey and Carano do not star in these films, rather, the films were created on them. Soderbergh needs them to be only bodies. They were hired not as actresses but as muses, as raw material on which the director could work his creative will, a will that is intellectual, artistically reputable, and in its own artsy way, kind of macho. And possibly kind of gross. The question, really, is whether Soderbergh gets this final level of the joke.

Another question is whether he bothered to fill Carano in on it. I’m only guessing, of course, but if I’m right, his artistic vision depends on making her look as vacant and affectless as possible. It’s not that I think he’s being mean or unfair to her, exactly. At the end of the day, she’s getting a starring vehicle. If all goes smoothly, it could be her ticket to a life of fame, fortune, and not-getting-punched-in-the-face that MMA could never offer her. If she does well, and the movie does well, she’s got it made. If she ends up coming across as vacant and affectless, well… first of all, that’s not even necessarily a deal breaker in today’s Hollywood, and second, if she turns out to be a bad actress that’s hardly Soderbergh’s fault. She might end up looking bad. But plenty of people would take that chance. They line up to take it every day.

19 Comments on “You Want Me To Be Eye Candy? Thoughts on Soderbergh and Stunt Casting”