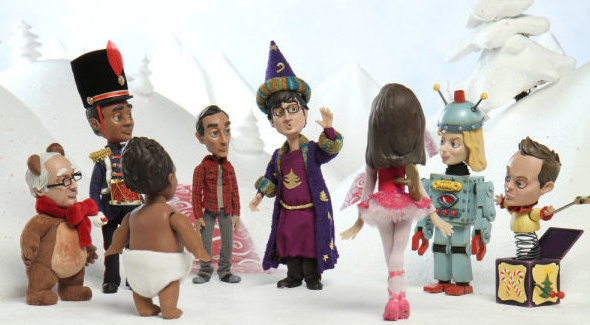 We’ve been following Glee pretty closely on this website since its debut last fall.  I’ve also been following – but not so much writing about – another fall 2009 premiere, Community.   When they first came out, Community was definitely the weak sister.  Glee came out of the blocks riding a tidal wave of hype to what looked like a surefire touchdown of popularity, critical acclaim, and mixed metaphors.  But Community has actually emerged as the stronger of the two shows. (At least aesthetically.  Its ratings are still not so hot.)

Other than coming out around the same time, the shows would seem to have little if anything to do with each other.  One is a studiously lighthearted sitcom set at – but honestly not very tightly connected to – a community college.  The other is… well, Glee is kind of sui generis, really, and changes from week to week, but it’s never that.  These are not shows that were destined to be mentioned in the same breath, like 30 Rock and Studio 60.  Nevertheless, Community has unilaterally decided that it is Glee’s arch-rival, and sneaks jokes mocking the other show into the background whenever it gets the chance.  And this fall, both series did episodes about turning to religion in a time of crisis which Wrather and I discussed on an episode of These Floral Teenagers a little while back.  And then last week, both series did Christmas episodes, which are really bizarrely similar.   On a surface level, both shows made highly specific references to beloved christmas entertainments of the past (How the Grinch Stole Christmas! for Glee, and the Rankin/Bass holiday specials for Community).  Much more strikingly, both episodes revolved around encouraging a mentally fragile cast member in his or her Christmas-themed delusion.  On Glee, we learn that Brittany still believes in Santa Claus, and Artie enlists the entire glee club in maintaining this illusion for her, Goodbye Lenin style.   Meanwhile —

Well, we’ll get to Community in a bit.  But can we just take a minute to discuss how creepy Artie is being here?  Let’s accept at face value his stated motivation, which is that he wants to preserve her childlike innocence.  Dude, you are sleeping with this girl.  Childlike innocence should not be a selling point.  We can read this straight back into the magic comb incident from the previous episode, by the way.  Yeah, the magic was in her all the time, great.  You still 1) straight up lied to her  2) in an attempt to manipulate her emotions 3) “for her own good.”  I’m not a guy who insists on radical honesty in romantic relationships… there is such a thing as a little white lie.  But this is not that thing.  The big problem, I guess, is that Brittany is so easy to deceive. To what extent is Artie just taking advantage of her stupidity?  And this brings up a much bigger, thornier question:  to what extent is it moral for Artie to get into a relationship with someone he can manipulate that easily?  And that brings up an even thornier question. How are we supposed to parse Brittany’s mental capacity?  She’s a cartoon, an apotheosis of the dumb-blonde-cheerleader archetype.  But then there are two minor characters on the show that are developmentally disabled in a non-cartoonish way.  The “Brittany doesn’t understand how stuff works” jokes that pretty much define her character would be a lot harder to laugh at if you put them in the mouth of Becky (who, for those who don’t watch the show, has Down Syndrome).  Could we laugh at them if Brittany was the butt of the joke, but she was having a conversation with Becky? It all feels very dicey.  Even referring to Brittany as “stupid,” which I did a couple of times earlier in this paragraph, feels a little unpleasant if you really think about it.  (Whether Glee fundamentally wants us to think deeply about these issues, or whether their writing staff itself is a little tone-deaf about this, is in itself a question well worth asking.)

Unlike Glee, Community rarely brings up a troubling issue by accident.  So when in the most recent episode Abed begins to hallucinate that he and the gang are all claymationed (claymated? clamanimated?) Christmas toys, the writers don’t give us the easy way out, or at least not right away.  Yes, eventually the study group eventually needs to decide that because they love Abed, they need to go with him on his magical journey to find the true meaning of Christmas and buy into the logic of his dreamworld.  But before that happens, they make honest attempts to cure him of his delusion — and this too is motivated by love.  Either one of these, honestly, would be a cop out.  Presenting both, even if they inevitably end up picking one, points to something more nuanced.  At what point does accepting Abed cross over into enabling him?  (Protip:  it’s probably when you physically assault his psychologist.  Sadly I no longer have the episode on my DVR, but I think John Oliver shouts something like “Ow! Ow! You’re actually attacking me in real life, you crazy bitch!” as Ballerina Annie tackles him.)

Another way that Community refuses to pull its punches is in the “true meaning of Christmas” that it comes up with at the end.  Again, comparisons with Glee are useful (and a little damning).  By having Brittany ask Santa to fix Artie’s legs, Glee is revisiting the moment earlier in the season where Kurt’s father is in a coma, and everyone starts praying for him to wake up.  As in that episode, we get the happy ending, at least sort of:  at the end of the episode we see Artie up on a crazy prosthetic walking device which I’m told really does exist.  The main characters accept this as a Christmas miracle (without the slightest hesitation, I might add), while the audience is informed that it’s the work of one Coach Beiste.  So far so good.  But what’s the message here?  There’s no such thing as a Christmas miracle?  There is such a thing as a Christmas miracle?  Christmas miracles are only real in that the Christmas spirit might move a football coach at a budget-starved high school to spend approximately $100,000 of her own money on your medical equipment?

The last is probably closest to what they were going for.  But it’s not really coherent.  The odds of Coach Beiste being able to pay for that thing are higher than the odds of Artie spontaneously regaining full use of his limbs, but not by a hell of a lot.  So the secular humanist miracle they’re going for turns out to be a magical miracle after all:  they have their cake and eat it too.

Community, on the other hand, eventually puts a box in Abed’s hands labeled “The True Meaning of Christmas.”  He opens it to find another box marked “Not yet!” And then another marked “Nope!” and so on, until he finally gets to the last box, which contains a copy of Lost Season 1 on DVD.

Since this is all Abed’s vision quest, we’re meant to assume that his imagination was incapable of inventing the true meaning of Christmas.  The idea of Christmas is literally hollow for him, in the sense that there’s nothing at the center.  But later, Abed realizes that “the true meaning of Christmas is the idea that Christmas has a meaning.”  By telling ourselves that this one day matters, we cause it to matter.  Because when you get down to it, there’s not very much to life beyond what we tell ourselves.  It’s a very postmodern message, in that it divorces the sign from the signified, and although it’s presented as uplifting I imagine some will find it bleak. (It also completely divorces Christmas from Christianity, something almost all Christmas episodes do anyway without the justification.) I admire Community for embracing that bleakness.  If you’re going to say that Christmas is important only as an idea, then you’d better be willing to make peace with the fact that the idea is all you get to have. No miracles.  No ReWalks.  No clap-if-you-believe-in-fairies.  And the idea is all they do have, on Community.  They sit down and drink hot cocoa and watch Rudolph the Red Nosed Reindeer, because that’s what people do on Christmas.  And this is enough.  It turns them from claymation back into human beings.

23 Comments on “Community, Glee, and the Reason for the Season”