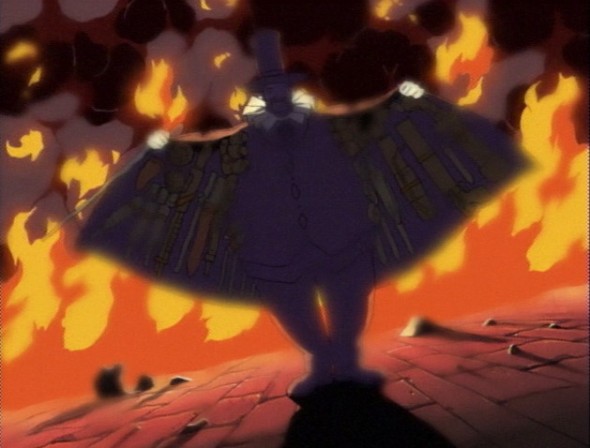 I mean, it's not exactly subtle. 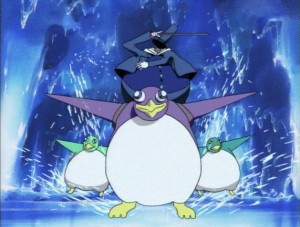 I’m sure that you’d all noticed how, in his rotundity and general tuxedoedness, Pierrot is a dead ringer for Oswald Cobblepot, right?  Well, I’m sure that the penguin surfing at left is no accident.  The whole episode just screams Batman.  The “heroes try to solve bizarre crime perpetrated by an insane criminal” structure of this episode seems like what you’d expect from a show about bounty hunters in space, but we’ve seen that it pretty much never actually goes down like that for the Bebop’s crew, and for Batman it’s par for the course.  As it turns out, of members of the Cowboy Bebop creative team actually got some important early experience doing animation for Batman, The Animated Series, and I think they’ve even acknowledged that this episode was supposed to be a tribute.  I’m not sure what to say about this other than to point out that the similarities exists… but we might ask whether Spike as we know him is Batman or Bruce Wayne, and whether we should ever expect to see the other persona.  And who his Robin would be (Ed, his orphaned ward?  Jet, his ambiguously heterosexual life-mate?).  And who his Alfred would be (probably Jet).  And what role Faye would play in all of that.  Ein, obviously, is Ace the Bat-Hound.

We should also note that Batman, as the greatest detective in comics, is an old hand at the kind of horror narrative I described above.  Typically he goes for the old-school Dracula style version of it, where the knowledge acquired through Batman’s detective work makes the actions of his rogue’s gallery less threatening.  And in any case, Batman is always, always able to use the information he’s required to defeat the bad guy.  But neither of these are what happens in Pierrot le Fou, which gets into the third way of experiencing the episode: