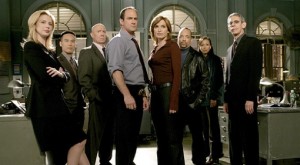 So those of you who are habitual readers know that Wrather and Sheely have a podcast on this site called “These Flirting Teenagers,” which purports to be about Glee and Gossip Girl.  Those of you who actually listen to said podcast know that almost as much of their time is devoted to talking about Law and Order: SVU.  Or rather, making one particular point about it:  that what the show is meant to be about—i.e. Law and Order—is not what it is actually about, which is the vicarious enjoyment of forbidden sexuality.  One of Wrather’s more elegant ways of getting at it is to claim that “We go to entertainment to see things we secretly wish we could do… if you are watching [SVU], you want the cheerleader to be raped.  If you were not happy with a representation of the adorable nubile cheerleader being raped, you would turn off the show.”

I can understand why he would think this.  What separates SVU from “vanilla” Law & Order is the fact that it wallows in a kind of crime that is, per the opening narration, “especially heinous.”  If we weren’t interested in something about the representation of those crimes, the show would not find an audience.  And if you pay attention to the casting choices… well, there’s kind of an unspoken law for casting directors in America, which is that—barring extraordinary circumstances—any actor or actress cast on a TV show shall be wicked hawt.  This applies for SVU as much as for any other show if not more.  And whether it’s intentional or not, this means that the actress who will portray the victim of a sex crime is going to be chosen partially so that she can serve as a desire-object.  So Wrather’s argument seems to make sense.  But there are three problems with it.

1)  If everything on SVU other than the illicit sex is just a pretext, then we should expect to see an overwhelming diversity of pretexts.

Consider another argument with the same formula: “Well, people enjoy BLTs, but the lettuce and tomatoes are just a veneer, therefore, people must get BLTs because of the bacon.”  If you carry it through to the implied conclusion—that people would really prefer to just get a stack of bacon on bread, no veggies, mayo optional—it flies in the face of our actual experience. While the lettuce and tomato are definitely subordinate elements of the sandwich, that doesn’t mean that they are optional: anyone who’s had a really well done BLT knows that the vegetables are integral to the experience.  And there is, after all, a reason why BLTs are available everywhere, and the Bacon, Bean-Sprout, and Cilantro sandwich (which I just now made up) is available nowhere.

Why are there no shows about an escort service that specializes in abduction fantasies, with the audience’s pretext being that “it wasn’t really rape”?  Or hell, take the episode of Glee where Rachel develops a crush on Mr. Schue.  This is still a representation of illicit sex (if a rather sublimated one), where the pretext is that “nothing really happened.”  Before you accuse me of arguing against myself, note that this was just one episode of a single show, while SVU is an entire series.  Show me an entire series about a high school teacher flirting with his students but never actually doing anything, and then we’ll talk.  Until then, Occam’s Razor dictates that we assume that SVU’s specific “pretext” is crucial to its success, which stretches the definition of pretext more than a bit.

2)  If illicit sex is the real point of Law & Order SVU, shouldn’t we expect it to appear in every episode?

The bacon analogy works nicely because bacon, like illicit sex, is something that many people are fascinated by, but know they should not really be having.  However, not all sandwiches are BLTs, and not all episodes of SVU are about sex.  Some are about non-sexual child abuse, or the murder of children.  There was a ripped-from-the-headlines baby shaking case, and at least one baby-in-the-dumpster-on-prom-night.  Sometime they’ll even tell a story with no connection to sex crimes or crimes against minors, by setting up an awkward pretext for Benson and Stabler to take the case.  Want to do a drug trafficking episode? Fine:  just throw in a drive-by shooting where a stray bullet happens to hit a fifth grader.

Remember that Wrather’s account of the show is that people watch the show because they want on some level to commit the crime.  This could makes a certain amount of intuitive sense for the sex cases, if you take a dim view of humanity… but do we all secretly want to shake a baby?  Do we all secretly want to accidentally shoot a fifth grader in a drive-by? Even the explicitly sexual cases tend to cover too broad of a spectrum for the sublimated-sex model to really work:  the audience member who feels an illicit thrill while contemplating the “nubile cheerleader” is not likely to feel the same thrill while contemplating the eight year old boy.  But both appear as victims on SVU, and the viewing experience (drawing from a sample size of one, granted) is not particularly different.

For that matter, it’s not particularly different from the experience of watching regular Law & Order, which is about murder rather than sex.  Now, I suppose you could argue that murder too is something that the audience could want to live out vicariously.  But recently they had an episode about a guy who was running a scam where he sold saline solution as H1N1 vaccine.  I think it’s safe to say that none of us have ever wanted to do that, not even on “some level.”  Not because the act’s too vile, because it’s too specific. And frankly, a little too boring.  Nevertheless, the episode felt like Law & Order. They all feel like Law & Order.

3)  If Law & Order is really about the crimes, shouldn’t we expect it to occasionally depict the crimes?

If the Law and Order on SVU is just a pretext, then the show is 90% pretext by weight. Keep in mind, Law & Order: SVU is an extremely fastidious procedural where the criminals are pretty much only EVER seen as they interact with the police and lawyers.  We are given to understand that the crime has occurred, but we never see it occurring.  And this isn’t just a matter of getting it by the censors. Compare SVU to Criminal Minds, which salts the action with grand-guignol cutaways to the psycho doing whatever it is that he does.

You do have to dance around sex more than you have to dance around violence on network TV, true, but the strategy they use on Law & Order is a circuitous foxtrot by anyone’s standards.  Whenever an offense is represented on Law & Order it is always through a process of narration. You know these scenes if you’ve watched any of the shows more than a few times.  The camera slowly zooms in on the perp as he describes the crime (periodically cutting to a Mariska Hargitay reaction shot for variety), the droning electric violin music kicks in, and the actor gives an intense, vivid account of the act, complete with tears, trembling lips, cracking voice, and all the other accoutrements of melodrama.

This moment of narration is the crucial, defining moment of any episode of any Law and Order show, as definitive for the genre as the money shot is for pornography.  Notice that when the lawyers have a suspect who is ready to plead guilty, one of their conditions is always, always that he allocute to the crime.  I can’t imagine that this happens in real life. I mean, yes, it would be important in cases where there are family members or other victims who need closure, or where there is an accomplice that will be incriminated by the testimony.  But it happens on Law and Order even when there is only one suspect, and only one victim, and no family members.  It’s there so that they can justify the speech.  It’s there so that the audience can get closure.

Presumably under the “SVU is sublimated sex” argument, the confession sequence would just be a Freudian return-of-the-repressed, standing in for the actual money shot which society will not allow us to depict, and  allowing the audience to experience the rapist’s actions through his words.  But the problem again is that these narrations also show up in the non-sexual episodes of SVU, in Law and Order Classic™, and—somewhat less consistently—in various epigoni such as Bones and Cold Case. Nor are they always delivered by the criminal.

There are actually three types that I’ve noticed.  I think the one I’ve described above, where the criminal confesses, is the most common.  But it’s also quite common for the crime to be described by the victim (especially on SVU, where the victim is less likely to be dead), often as a crucial last-minute piece of testimony in court.  Least frequently, it can be delivered by the cops or prosecutors themselves.  This pops up in those rare epsiodes of Law & Order where the real criminal gets away with their crime by convincing the protagonists (and the jury, and the audience) of their innocence.  At the very last minute (usually after the verdict has been delivered, and thus too late for any practical effect), one of the lawyers will catch them in a lie and confront them with it, staging a confrontation that has no purpose other than to deliver that all-important rehearsal of the crime.

To summarize what I’ve said so far: