Every now and then, we like to take a break from our usual coverage of cyborg movies and dance pop to talk about something a little different.  By which I mean:  every now and then it’s one in the morning on the night before my post is due, and I’ve spent the last two hours frantically scrambling for a topic and coming up blind.  I just haven’t consumed any particularly interesting pop culture in the last week.  Makes it kind of hard to write about the stuff.

So what did I do this past week?  Well, I had a pretty good sandwich… yeah.  Okay, sandwiches.  Let’s overthink this thing. 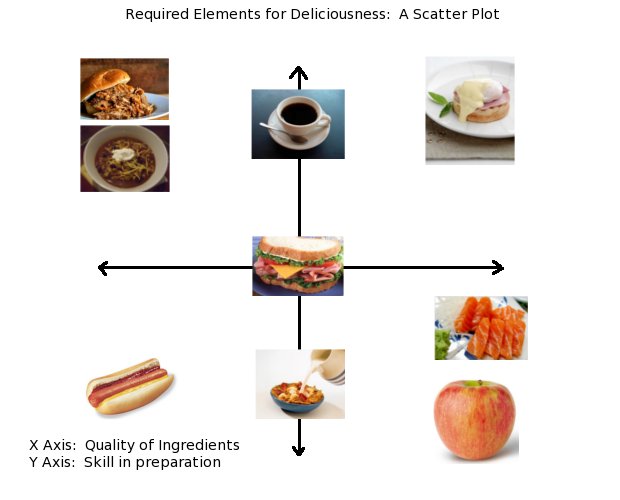 As a general rule, food requires either quality ingredients, skilled preparation, or both.  Pulled pork barbecue and chili are way up in the top left corner because, while they both take a fair amount of skill to do well, the quality of the ingredients doesn’t matter at all.  Barbecue is quite literally a cooking technique developed in order to compensate for having terrible cuts of meat.  Have you ever seen an uncooked brisket?  It’s basically a wad of fat and gristle.  Unlocking that delicious meaty lockbox takes time, energy, and no small degree of skill.

Sashimi, on the other hand, is way out there on the lower right.  Quality of ingredients – by which I mean essentially freshness of fish – is all-important.  Not only does it determine whether it tastes good, it determines whether or not it will kill you.  But as for preparation… look, this is raw fish.  It’s not going to get any rawer.  There is a very real sense in which it has not, actually, been prepared.  Now, this doesn’t mean that the people who make it aren’t talented.  It’s one of the most elaborately presented foods in the world, and carving fish into perfect gem-like slabs is tricky business. And sushi — the difference, as I’m sure you know, is that sushi is presented on a little lozenge of rice with a thin film of wasabi paste, while sashimi is just a stack of fish slabs — is basically the Japanese equivalent of a sandwich, which we’ll be getting to later on.   But when it comes to sashimi, they are not so much chefs as sculptors whose medium is food.  The only food where preparation matters less is the apple, where the recipe consists of

Coffee is in the top middle.  The ingredients do matter here, some, but not nearly as much as the preparation.  It’s very easy to take some high-end small-batch free-trade shade-grown hand-roasted Ethiopia Harrar, and turn it into something that tastes like cat piss by messing up the brewing process.  Its opposite number is breakfast cereal.  This is all but impossible to screw up:  your culinary experience is determined entirely by which brand of cereal you buy… but quality of ingredients is only going to take you so far.  The most expensive cereal in the world is still going to taste like cereal, so you might be better off sticking to the Cinammon Toast Crunch, or even the Pathmark-brand knockoff thereof.  Ingredients still matter some, though… shredded wheat is pretty gross.

The lowly hotdog sits in the bottom left corner.  Now I’m no snob:  I’ll eat hotdogs and I like them.  But I have no illusions about the kind of “meat” that goes into the things.  Could you create a sort of uber-hotdog, that used no fillers and only the finest grass-raised beef?  Well you could… but it would not be a hotdog.  It would be a sausage.  The hotdog is not a distinct culinary category:  it is shorthand for the cheapest sausage available, cooked in the laziest way available. Marshmellows could go down here too.  Anything you toast on a stick over a campfire.

In the top right, on the other hand, we have eggs benedict.  To make these, you first need to make poached eggs and hollandaise sauce, and there are dozens of ways to ruin either of those.  But the quality of your english muffin, your canadian bacon, and even the egg itself is going to depend heavily on how deep your pockets are.  Which is why this foodstuff is basically never seen outside of brunch restaurants.

And finally, we have the sandwich, the origin point, the one food in which ingredients and skill are perfectly balanced.

But this is actually a radical claim.  Many people don’t think of sandwiches as taking skill at all:  you just slap some stuff between two pieces of bread and eat it, right?  Wrong. 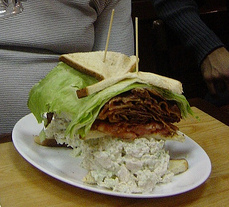 The atrocity at left is the “Bacon Whoopee,” available at the Carnegie Deli for a mere $22.  As a bacon-delivery vector, this is superlative.  As a sandwich, it is completely incompetent.  A properly calibrated sandwich is all about balance.  It is an exquisitely tuned chord.  Allow any one element to overwhelm the others, and the sandwich is ruined.  Ruined!  You need to be able to taste every component.  At the Carnegie Deli, this is not going to happen.  This is also the problem with the sandwiches at Subway.  It doesn’t really matter what you order at subway:  they basically all taste like the bread, with a little crunchiness from the lettuce.  (This is why when I have to eat at Subway, I just get the vegetarian sub.  It tastes the same, and it’s cheaper.)

And yet these two options – giant overpowering stack of meat; giant, flabby, overpowering bread – seem to be the dominant paradigm in modern sandwich making.  So here, as a public service, I present Stokes Sandwich Algorithm.  I don’t pretend that it’s a perfect formula, but it’s better than a hell of a lot of the stuff out there.  And I think it’s proof that anything – even a sandwich – can be overthought.

Cheese:  the trick here is that the slices should be very, very thin, and no more than two layers.  The flavor won’t come out right otherwise.  If you want more cheese, don’t put the layers next to eachother.  I list cheese first because it’s  the sandwich’s limiting factor.  You can’t use too much cheese, and none of the other elements can overwhelm the cheese. Of course, if you’re not putting cheese in your sandwich, the rest of this formula is basically useless.  Sorry about that

Meat:  About two to three times the size (by thickness) of your cheese layer.  Thin slices are important here too:  this is the one thing that the standard deli sandwich gets right.  But it’s not so much because of the flavor.  It’s because a thick slice of meat is hard to bite through.  You run the risk of dragging the whole slice of meat out of the sandwich, all slimy and covered with mayonnaise, and at that point the aesthetic experience is more or less ruined.  If you can’t cut the slices thin, you’ll want to cut them lengthwise as well.  (Incidentally, this is the way that chicken salad works.)

Lettuce, Tomatoes, Pickles, Cucumbers, and the like:  What exact kind of vegetables you want to use is up to you.  The combined layer, though, should be exactly the same size as the meat layer.  Obviously if you’re using something very strongly flavored – pickles, hot peppers, raw onion – you want to use less.  One slice of cheddar, three slices of roast beef, and a single near-translucent slice of red onion makes for a very fine sandwich indeed.

Condiments:  Again, less than you think.  Nothing is more revolting than taking a bite of the sandwich and winding up with a big blob of mayonnaise in your mouth, unless it’s biting into a sandwich and having mayonnaise squirt out the sides and all over your hands.  Spread thin, using just enough to moisten the surface of both slices of bread, and let it go.  Grinding a some fresh black pepper onto the bread after you apply the condiments is often a nice touch.

Bread:  must be firm enough to hold the sandwich together, must not be so coarse as to scratch the roof of your mouth.  The two slices, together, should be about the same thickness as the meat layer, or slightly thicker.

Now, this is the formula that works for me.  Your results may vary.  But use this as your starting point.  Then maybe the next time you make a sandwich, use a little more meat.  Use a little less cheese.  Use a little less mayonnaise (but not more, because that squirting out the sides of the sandwich thing is really, really gross).  And once you’ve arrived at your own platonic sandwich ideal, remember what it is.  Do it that way every time from now on.  Life is short.  And the people reading this website (not to mention writing for it) are wasting too much time already to waste any more eating imperfectly balanced sandwiches.

Or read more from… Culture, aesthetics, overeating it

15 Comments on “Towards a theory of sandwich aesthetics”