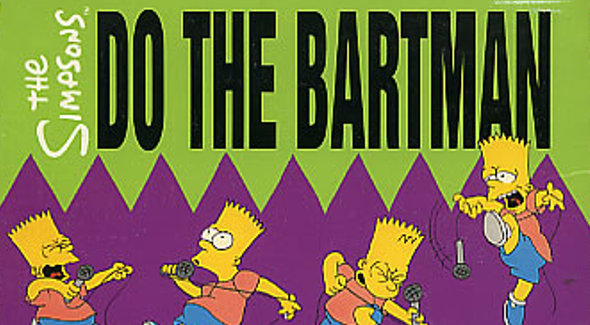 This is not a parody either, really. It's a... what is the word. Fiasco?

Man.  Writing about The Simpsons is hard.  Even though I’m still a fan, when I sit down to try to talk about the series, I find myself asking, “which series?”  It’s been around for so long… the show itself has changed, and I’ve changed, so the way I relate to the show has changed a LOT.  Trying to talk about all twenty years at once doesn’t even really seem possible.  Note that I’m not one of those people who says that it used to be good and then jumped the shark.  It’s just different now. (And it’s not just one before-and-after difference either.  I can think of at least three or four different phases in the show’s development — or rather, in the development of my relationship to the show?)

I cannot for the life of me figure out a way to celebrate or analyze their 20th season.  So instead I’ll just use The Simpsons as a jumping off point to talk about musical parodies, which have been much on our minds of late.

The Simpsons is notable for never licensing outside music (or at any rate doing it rarely).  When they want to reference a specific song, they have the music staff come up with a version that’s juuuuust close enough.  This is in contrast to South Park, which tends to reference styles rather than particular songs, and in contrast to Family Guy which tends to insert the songs unchanged for no reason other than that Seth McFarlane is kind of a giant geek.

You get to hear a bunch of the Simpsons‘ logrado musical numbers in the episode “Yokel Chords,” which is more or less a parody of The Sound of Music. Here’s the opening melody of “How do you Solve a Problem Like Maria,” and the Simpsons version, “How do you Gag a Blabbermouth like Lisa.”

And here’s the title song, with the Simpsons version first this time.

And just to prove that it’s not something that shows up in this episode only, compare Falco’s “Rock Me Amadeus” with the Simpsons’ immortal parody version, “Dr. Zaius, Dr. Zaius.”  Falco’s melody leaps up a fifth between the “ma” and the “de” of the second “Amadeus.”  The Troy McClure version doesn’t do anything of the kind:  instead it just circles around a single pitch.  And a similar transformation even happens to the synth line in the background.

In each parody version, the melody and melodic contour is quite different from the source — the “Hills are Alive” one even starts with a direct inversion, which is cute — but the rhythm is exactly preserved every time.

I’ve usually heard people say that Fox’s legal department demands that the Simpsons’ parody versions need to be juuust different enough that they could claim in court that the resemblance to the original song was a coincidence.  (I’m pretty sure they even made a self-aware joke about it in a recent episode, although I don’t remember exactly where).  But I don’t quite believe this for a second.  After all, there are other ways to do musical parodies.

(I was going to go for “Like a Surgeon,” but this was the only Weird Al video I could find that allowed embedding. Go figure.  And man, remember when this song and this movie both seemed worth mocking? Takes you back.) The main joke with this kind of Weird Al Yankovic song – the only joke, really, and a pretty durable one – is that while the lyrics are silly, the song is played straight.  Now, Weird Al actually does get permission to do the things he does.  But if he can get permission, The Simpsons could too, and I’d be willing to bet that they do get permission for the distorted versions that they use.  After all, it’s not like they’re fooling anyone.  Take a listen to “My Favorite Things,”

and the Simpsons approximation of it (at 2:05 into the video, which will probably get pulled off of Youtube by Fox before the week is out.  They seem to be real jerks about that kind of thing.)

Two things are interesting to me here.  First, Julie Andrews seems to find the “My Favorite Things” melody just as insipid as I do, because she can’t get through a stanza without just speaking a couple of the lines.  Second, both versions start out in minor and then give you a major-mode version – the “girls in white dresses” part in The Sound of Music, and the “pretentious laughs” bit in “Yokel Chords.”  This is similarity is on a rather different order than just having the same rhythm.  Put the two together, and you end up with something that’s quite, quite clearly derived from The Sound of Music, and music derived from preexisting music is just as much of a copyright violation as using the preexisting music outright.  (Of course, The Simpsons could always argue that as a parody it’s fair use… but the Weird Al version is fair use too, and in any case I can’t imagine a massive corporation like Fox risking their money on something as unreliable as a fair use defense.)

So if these parodies aren’t a CYA move forced by the legal department, why do it?  My guess is that they do it because it’s funny.  The feeling of “close but not quite” that these songs create is much, much funnier than the Weird Al joke of “Hey, he’s singing like Madonna!” And more consistantly funny than the Family Guy joke of “Hey, they stopped the show for five minutes to insert a musical number!” Swinging wildly, this might suggest that keeping the rhythm and song structure but changing the melody has the same comedic value as keeping the rhyme scheme and changing the subject of a poem… which would sort of imply that that melody plays the same role in music* that semantic meaning plays in language.  And that’s interesting because it’s an idea that has been floating around in philosophy-of-music circles for I think literally centuries, without any conclusive evidence for or against it.  I wouldn’t call this a conclusive argument either.  But look at another song from South Park, “Up There”.  This meaning of the lyrics here is pretty much identical to the meaning of the lyrics of “Part of That World” from The Little Mermaid.  But is it a parody of “Part of That World?”  “Up There” is hilarious, sure, but is there anything comedic about its relationship to the older song?  Not so much.  For the melody version, take an example right out of The Music Man itself, where “Goodnight My Someone” and “76 Trombones” are radically different arrangements of the same melody. This is kind of funny for a second when you first notice the resemblance, but could you say that either song is a parody of the other?

So… yeah.  Simpsons! Here’s to twenty more years, I guess.

* where by music, I obviously mean mainstream Euro-American tonal music

12 Comments on “The Simpsons and Musical Parody”