VerhOeverthinking It week may be over, but a lot of the analysis we did on the work of filmmaker Paul Verhoeven carries over into other areas of the popular culture, such as music. Ladies and gentlemen, meet Steel Panther, the Starship Troopers of Heavy Metal. 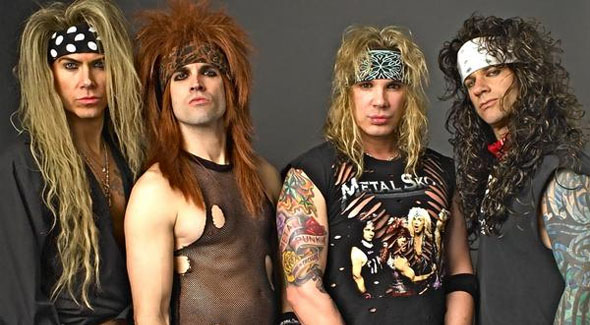 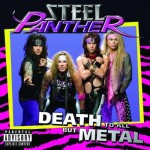 Poison called. They want a lot of things back, but mostly the font for their logo.

I’ll get back to Starship Troopers in a moment. First, let’s get to know this band. Steel Panther has been gestating on the LA club scene for much of this past decade, but only recently has come to prominence. They have pretty much everything you’d want in an 80’s metal parody band (assuming that you would actually “want” such a thing; I know I do): big hair, soaring guitar solos, and anthemic choruses.

But things get a little uncomfortable in the lyrics department. Unlike The Darkness, the other notable metal parody act from this decade, or Spinal Tap, the founders of the genre, Steel Panther’s lyrics are less double-entendre and more…single entendre. In fact, they go to levels of crudeness and vulgarity way beyond the likes of The Darkness or Spinal Tap. Witness their poetry in their lead single, “Death to All But Metal” (warning: NSFW, if your workplace is anything at all like mine):

In case you’re not able to watch the video, here’s a sample of some of the lyrics (also probably NSFW, so if you’re boss is standing behind you, scroll fast):

Eminem can suck it, so can Dr. Dre
They can suck each other just because they’re gay
They can suck a d***, they can lick a sack
Everybody shout, “Heavy metal’s back!”

And how about these pearls of wisdom?

Death to Britney Spears, kill the little slut
Kill Madonna too and then f*** her in the butt
F*** Mariah Carey, death to Sheryl Crowe
They can kiss each other on the camel toe
50 Cent’s a fag, so is Kanye West
Shooting hot sperm on each others’ chest

So what do Verhoeven and Starship Troopers have to do with what appears to be an exceptionally crude version of The Darkness? To paraphrase the collective thoughts of the Overthinking It community, Verhoeven is certainly a skilled and talented filmmaker, but he uses his talents to assault and taunt his audience with things like tawdry nudity and a violent rape scene in Showgirls, over-the-top violence in Robocop, and fascist imagery in Starship Troopers. And because his audience is often part of his satire, his work is often misunderstood.

Leni Riefenstahl called. She wants her filmmaking techniques back.

Let’s hone in on Starship Troopers for a moment (be sure to read Perich’s excellent article on the subject from last week if you’d “like to know more”). The movie’s satire operates on several different levels: first, there’s the overt satire of fascism in its war-baiting commercials and newsreels. Second, there’s the more subtle, but still pretty obvious, satirical elements of the overly jingoistic characters, uniforms, dialogue, etc. The third part of the satire is the trickiest to dissect and explain properly: the audience and how its reaction to the film are also part of the satire.

We are repulsed by the bad acting, the gratuitous violence, and the glorification of fascism, but at the same time we can’t help but share the characters’ anger over the destruction of Buenos Aires and root for them in their quest to kill as many bugs as possible. Oh, and we actually like the gratuitous violence on some level. And more importantly, we come out in droves to see movies that are a lot like Starship Troopers in their glorification of fascism and militarism, except that they lack, you know, the satire:

Steel Panther’s satire works similarly: first, there’s the overt satire in the bawdy, over-the-top lyrics. Second, there’s the more subtle, but still pretty obvious, satirical elements of the music that both mock and celebrate the gratuitous guitar solos and power-synth choruses. And then there’s us, the audience. We are repulsed by the lyrics–both by their vulgarity and their banality–but at the same time we can’t help but sing along. We like the references to killing female pop stars on some level. And more importantly, countless mainstream musicians unironically employ this level of vulgarity (and sometimes banality) in their lyrics, and yet we’ve grown so accustomed to this that their music has become fixated in the soundtracks of our lives.

Lastly, when you put all of this in front of a live audience…well, seeing is believing:

The crowd sings along, even with the utterly profane lyrics, and make the metal sign with their hands. They’re rocking out. They’re part of the joke that is cock rock. The genius of Steel Panther is that they lift the thin veil of acceptability of heavy metal and reveal its true underlying nature to an audience that simultaneously gets the joke and doesn’t care that they’re part of the joke.

But perhaps I’m giving Steel Panther too much credit. The far less Overthought but far more likely interpretation of their act is that they’re using their status as a joke metal band as an excuse to lazily write the most juvenile, offensive lyrics possible, knowing that they’ll gain attention and appeal to the meat-head segment that either doesn’t know or doesn’t care that they’re part of the cock rock joke.

Either way, before I turn it over to the readers to debate in the comments, I want to acknowledge a couple of things. First, I would probably be in the middle of the crowd, pumping my fists and singing along to “Death to All But Metal” if I were at one of their live shows. I may be an Overthinker, but I’m not so blase that I can’t lose myself in a music act, even if it’s silly and profane. And that leads me to the second thing I’d like to acknowledge about Steel Panther: they’re excellent musicians, and their songs are exceptionally well crafted parodies/tributes to the best of the 80’s.

One such example is “Party All Day (F*** All Night),” Steel Panther’s spot-on tribute to “Livin’ on a Prayer.” Listen to this while you contemplate how awesome/awful Steel Panther is (warning: you guessed it, NSFW):

11 Comments on “Steel Panther: The “Starship Troopers” of Heavy Metal?”