From the 40’s onward, the single largest group of pop-culture consumers have been the Middle Class.  From their vantage point, what do the Vampire and Werewolf forms mean?

What does it mean to be a Vampire? 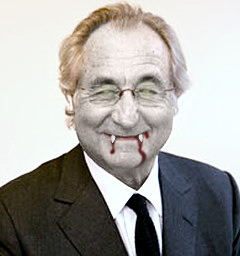 I swear, this is an UNDOCTORED photo

Vampirisim is an allegory for the wealthy elite.  Vampires form a class of beings whose access to power–both in the conventional and the occult sense–is nearly limitless.  They are not brute beasts who ravage the lands they inhabit in bursts of unchecked rage.  Rather, they manipulate, they seduce their victims through their personal magnetism, and the illusion that the victim might, through association, have access to their nearly limitless power.

Vampires  inhabit an unimaginably insular society,the ultimate ruling class.  While entrance into this coven grants the Vampire access to unparalleled power, it requires an enormous personal sacrifice: the literal loss of the entrant’s soul, his/her humanity.  In the process of death and un-death, the Vampire rids himself of the personal connections he bore before, as the exclusivity of Vampire society, and the nature of the predator-prey relationship, precludes close ties with humans.  Likewise, the Vampire becomes disconnected from the natural world, from the earth.  Food no longer sustains him; sunlight literally kills him, and hence day-to-day activities must be exacted through servants, slaves and other intermediaries.  Indeed, while little is unavailable to the Vampire, and while he must do little to acquire it, the process of acquisition takes the form of an employer-employee relationship.

Hence, no longer able to function amongst the general populace, the cloistered Vampire pulls the strings of his underlings, drawing victims in through the oblique promise of power, and draining them of their life-force so as to further his immortal life.  He is a leech on society.

Of course, from the aesthetic sense, the metaphor fits quite nicely: Vamps take the guise of aristocrats, hanging out in luxuriant castles and donning opulent clothing.  But the correlation doesn’t end there.  Vampires hate garlic, a simple food pulled from dirt and eaten raw, a symbol of the plebeian life.  They fear the church–the eternal crutch of the working classes–which makes sense both diagetically and metaphorically.  After all, post 19th century, Big Business had surpassed the Church in wealth and power, and sees it more as a threat than an ally.  Vampires (like Wall Street analysts) victimize through an intellectual game, their victims both fear and envy their power, and would just as soon join the beasts’ society as they would kill it off.  Hence, the act of killing a Vampire becomes a game of wits as much as it is a hunt.  And the simple, peasant’s implements with which one kills the vampire clearly denote who his natural enemy is.

But of course, the Vampire–and his society–is immortal.  Time, time and again you think you’ve killed them off, only later to find they’ve come back even stronger.

What does it mean to be a Werewolf? 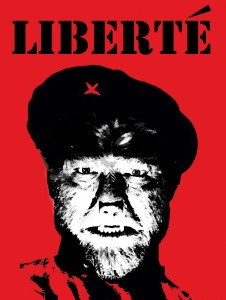 As revealed by the structural assessment, Werewolves diametrically oppose Vampires almost perfectly.  Accordingly, they represent the peasant class, the irretrievably destitute.  Recall, Vampire movies tend to use a normal human (i.e.-Middle Class) protagonist, thus the film follows seemingly powerless people as they band together to stop a seemingly insurmountable foe.

Werewolf movies are different.  Sure, there’s plenty of people-banding going on, but the monster here is a normal person who’s become afflicted with an illness–he himself is often the primary protagonist, if not a secondary one.  In this way they’re similar to the “Accident of Science” horror movies of the 50’s and 60’s, but WerePeople rarely bring their affliction upon themselves; they’re not being punished for playing god. In the most assuring cases (for the audience, at least), they’re being punished for trying to feel someone up at Makeout Point.  In the most unsettling cases, they’re being punished at random.

And what is the nature of their punishment?  Essentially, a mindless return to agrarianism.  Unlike Vampires, the Werewolf maintains a living organism in the scientific sense.  He’s not undead, in fact the amplification of his animal nature makes him more alive.  Becoming a Vampire is a willful process which keeps the will, but not the soul, intact, whereas becoming a Werewolf is an mindless act which strips you of your mind, but frees your body into a grotesquely feral state.  You’ve lost your humanity, but you’ve regained a deep connection to nature.

In the context of economic metaphor, becoming a Vampire imbues a Middle Class citizen with the god-like powers of the ruling Gentry, all in exchange for shirking off human ties with the lower-class brethren.   This is what we now commonly call “climbing the corporate ladder.” Inversely, while becoming a Werewolf imbues a Middle Class citizen with a fierce self-determination, physical robustness and a feral connection to the earth, it concomitantly severs his ties with society.  In our modern culture, we call this “farming.”

Of course, just as the Vampires’ natural foe are the stake-wielding Peasantry, Werewolves’ most obvious enemies are the upper classes, the kind who can afford to blow $5.23 per gunshot.  It’s quite intentional, too, that Werewolvism takes its victims by happenstance: a sudden drop from the Middle Class into poverty would have deeply resonated with those who experienced the Great Depression first hand.  And as we all have been recently reminded, poverty can strike nearly anyone, at any time.

SO, taking this all into consideration, one must wonder: why are the Vampires of late such pussies?