80 days ago, BP’s oil drilling platform Deepwater Horizon began to spew millions of gallons of oil into the Gulf of Mexico. Neither BP nor the government seem able to do much to stop the flow while balls of tar coat beaches in Louisiana, Mississippi, Alabama, Texas and Florida. The tourist and fishing industries in the Gulf, industries that employ hundreds of thousands of people and bring in more than $100 billion/year, will be devastated for decades.  Meanwhile, Congress is still debating whether or not to lift the cap on financial liability for companies that drill offshore above $75 million. 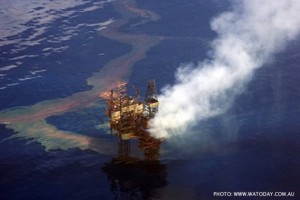 To the unemployed victims of the Gulf oil spill, it must seem like the government simply can’t or won’t help them.  It’s up to pop culture to save the day.

James Cameron and Kevin Costner have actually tried to help, but the only realistic solution is a team of highly trained criminals with hearts of gold who are willing and able to fulfill our government’s half of the social contract.

In the last few years, we’ve seen the proliferation of a type of movies and television shows that I call the “Merry Men” genre.  Echoing the team that Robin Hood built, these shows feature a mastermind who puts together a team of incredibly competent outlaws and uses their specific and illicit talents to fight for the little guy when the government can’t.  To follow the nomenclature of the most recent example, TNT’s Leverage, each team generally features individuals who fit into one of five types: Mastermind, Grifter, Hitter, Hacker, and Thief. 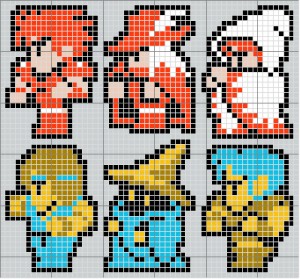 A hacker would have been significantly more useful than the white mage.

Merry Men isn’t a new genre and it borrows from a lot of different traditions.   Homer’s Odysseus, Robin Hood, the Magnificent Seven, the Dirty Dozen, and crew on Serenity – we’ve seen similar things before.

In modern pop culture however, the first and greatest example is the A-Team.  Building on the “pulling a team together” motif of the original Mission Impossible series and adding a post-Vietnam mistrust of government, from 1983 to 1987, the A-Team was the group of super-criminals that the hopeless could turn to when no one else could help.

In 2001, Ocean’s 11 reinvigorated the genre.  The first third of the film consists entirely of the recruitment of the perfect team for the perfect job.  Remembering the first time I saw this, I couldn’t wait to see who was next – each member adding to my anticipation for the plan that required him.  These guys weren’t robbing from the rich not to give to the poor, but at least they had the relatively noble goal of making a bastard pay for his bastardry.  The subsequent sequels followed the same basic structure.  They weren’t as fun, but they kept the genre moving until the end of the decade.

And that’s when the genre really got moving again with two solid shows.  In June 2007, the criminally negligent USA Network brought out Burn Notice, in which a disgraced spy, a drunken former Navy SEAL and an Irish terrorist help the helpless in Miami. In December 2008, TNT debuted Leverage, in which five master criminals pull a job that both sticks it to the man and makes them all insanely rich.  They had such a good time that they subsequently devote themselves to helping the little guy.   Leverage really epitomizes the genre.

(Note: I understand that both the late-aughts show Prison Break and the new Human Target have similar setups, but I’m not familiar enough with them to write about them.  Feel free to do so in the comments.)

Something is different these days – the role of the US government and of the business world.  In the Magnificent Seven and many episodes of the A-Team, the battle is fought in a lawless land outside the reach of the government.  It’s not that the government doesn’t want to help the poor Mexican peasants of either the Magnificent Seven or the A-Team pilot episode – it’s just that it’s outside of US jurisdiction.

Leverage and Burn Notice, however, take place in Boston and Miami, respectively, and consistently demonstrate that the government can’t be trusted to protect its own citizens on its own soil.  On top of that, villainous corporations have become a more frequent villain than the drug cartels of the 80’s or the terrorists of the early part of the decade.  Corporations step on the little guy and the government is powerless to help.  Welcome to Louisiana.

Leverage in particular routinely portrays the government as either too weak to make a difference, too bound by red tape to be effective, or too corrupt to care.  The main character, Nathan Ford, had been a brilliant insurance investigator before the insurance company he worked for refused to pay for treatment for his son, leading to his son’s death.   Now he helps the little guy take on the corporate titans that the government can’t, or won’t, hold accountable.

Army reservist who was injured by a corrupt government contractor in Iraq?  Why call the VA when you know the Leverage guys?

Corporate prison company buying off judges to send innocent people to jail as part of a racket to utilize prison labor?  Let Leverage be your check and your balance.

So what have we learned?   If you’re in serious trouble anywhere outside the United States, you better know some gunslingers or the A-Team.  If you’re in the states and you’ve pissed off an all-powerful corporation, you better buy a ticket to Boston or Miami.

Which brings us back to the Gulf of Mexico.  Television, our source of goodness and information, suggests that if the government can’t help, it’s time to call in the criminals.   Let’s take a brief look at how the A-Team, Ocean’s 11, and the Leverage crew would deal with the Deepwater Horizon spill.

Click through for the A-Team vs the Oil Spill 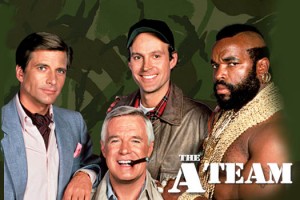 Chuck Thibodeaux, a shrimp boat owner from the Louisiana coast is about to lose his boat because his insurance company claims that they’re only liable for damages that are reported within 80 days of a disaster.  Since the oil didn’t reach the area Chuck shrimps until day 81, the company won’t honor his claim (this will actually start happening to people today, July 8, 2010).  He’s tried to make some trouble in the press and now the insurance CEO, T. Preston Daughtry, has sent thugs to threaten his family unless he shuts up.

The A-Team arrives.  While BA secures Chuck’s family, Face pretends to be a low level accountant in the insurance company who has discovered a serious error in the company’s books and shows up at Daughtry’s waterfront mansion.  Seconds later, Hannibal shows up as an agent for the Louisiana insurance commission and offers Daughtry an choice: give Face a $100,000 bribe or he’ll launch a full investigation of his company’s practices.  Daughtry brags about his new speedboat, tells him that $100,000 is easy money, and makes plans for a hand off.

The plan is to take the money, give it to Chuck, then disappear. Unfortunately, Daughtry, who had already bribed the insurance commission, smells a rat, and at the handoff, catches the team off guard, ties them up and throws them into Thibodeaux’s boathouse along with the since-captured Thibodeaux family (they got the drop on BA).  Departing in his fabulous speedboat, Daugtry tells his men to burn down the boathouse once he’s back at home with an alibi.

Fortunately, all of Thibodeaux’s tools are in the boathouse.  Cue welding montage.

Just as the henchmen get the call to light up the boathouse, the shrimp boat, newly covered in armor and powered by two propellers from those awesome bayou airboats, blows through the doors and surprises the guards.  Machine guns are fired.  Nobody is hit. 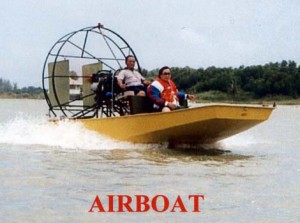 I ain't gettin on no airboat, Hannibal.

The shrimp boat, it turns out, is also equipped with a number of hoses connected to the new HVAC system that Thibodeaux had ordered.  As Murdoch drives it (it has propellers, so he gets to drive instead of Mr. T) madly to Daughtry’s mansion, it sucks up the layer of oil that coats this section of the bayou.  Reaching the mansion, the armored shrimp boat crushes Daughtry’s speedboat to splinters, bringing Daughtry and a number of other men running to the waterfront.

Hannibal says something snarky, then hits reverse on the HVAC and spews out all the nasty oil onto Daughtry and his friends.  The shrimp boat pulls away right as the cops and the media show up.

It turns out that the hot, conscientious daughter had told Face that all of the local insurance bigwigs were meeting at the house to illegally conspire to withhold payments to victims of the oil spill.   The bribed insurance commission agent was there with them and they had documents on them that proved all of it.  Slipping and sliding in the oil, they couldn’t hide them when the police showed up.  They’re all going to jail and their companies will have to pay all the claims.

Hannibal loves it when a plan comes together.

13 Comments on “Who best to clean up the oil spill? Fictional criminals.”