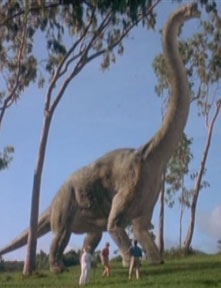 Basing the Ghost Ship Moment off the title is the simplest way to do it. But it’s more useful (and fun) to alter our definition to, “When the main character learns what everyone in the audience knows.” For instance, the title Jurassic Park is somewhat vague. But everyone who sees that movie knows it’s about dinosaurs. So I’d say Richard Attenborough’s big “Welcome to Jurassic Park” moment definitely counts as a GSM. It’s probably a safe bet that the large majority of Oedipus Rex theatergoers know what’s coming. So the GSM there is when Oedipus learns who his wife really is. Similarly, I’d say that anyone in our lifetime who bothered to rent Soylent Green knows that’s its MADE OF PEOPLE, so that’s the GSM.

The trick is, once you start going by this definition, you have to make a lot of subjective calls about what the average moviegoer knows. Doesn’t everyone who sees Jurassic Park know that the dinosaurs are going to escape? So you could argue that the GSM is that scene where the T-Rex barges through the electric fence. And maybe the first Harry Potter film has two GSMs: the moment Hagrid tells Harry he’s a wizard, and the moment much later where he first hears about the Sorcerer’s Stone.

So far, so good. Now let’s talk about Class A Ghost Ship Moments, which happen only in horror movies. You see, the Ghost Ship moment is all about dramatic irony. You know something and the protagonist doesn’t. The GSM is when this gap closes. And in no genre is the gap as gaping as Horror.

From the very beginning of a horror flick, you know the characters are in deadly danger. You know it because the movie is called The Texas Chain Saw Massacre, and the poster screamed “Who will survive, and what will be left of them?” You know it from the moody way everything is shot. You know it from the creepy music. You know it because you’ve seen minor characters get brutally chainsawed. But the main characters remain stubbornly unaware of the danger. They joke with each other. They have sex. If one of them gets a little creeped out, the others may play a prank on them. There is a massive gulf between the way the characters behave, and the way they should be behaving. The GSM changes this. 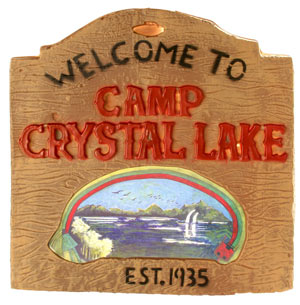 And you thought YOUR summer job was bad! Badabing.

NOTE: Not ALL horror movies follow this slasher pattern. In a lot of zombie movies, the undead attack very early on, and that’s the GSM. In other movies, it’s hard to put your finger on the exact moment the protagonist wises up. When does Naomi Watts start believing she’s actually cursed in The Ring? And while Scream is definitely a slasher film, Neve Campbell is in danger almost right away.

I’ll use this year’s remake of Friday the 13th as a case study. (Go away now to avoid Friday the 13th spoilers.) It begins with a sequence in 1980. That obviously doesn’t involve our protagonist. Then in the present, we’re introduced to a group of five teens. Jason promptly dispatches four of them, kidnapping the one who looks vaguely like his mother. Once again, not our protagonist, so we haven’t gotten to the GSM. Then we meet another, completely different group of teens, including Clay (who turns out to be the “final girl“). Clay goes out looking for his sister (the girl who Jason kidnapped). When the group is separated, Jason picks off a couple of people.

So now we’re 52 minutes into the film. Clay doesn’t have any reason to be scared. Then…

Thud. Dead body lands right in front of him. Clay suddenly knows that there’s something very wrong at Crystal Lake. From here on out, he and the viewer will be on the same page. That’s 52 minutes into the movie. Friday the 13th is an hour and 40 minutes long, so this GSM takes place 52% of the way through the film. (Ghost Ship‘s Ghost Ship Moment took place at the 61% mark.)real

So people, I invite you all to perform a little experiment with your favorite horror film. Check and see how far along it is before the main character realizes she’s in a horror movie, calculate the GSM percentage, and post it in the comments.

By the way: while I can’t recommend Ghost Ship as a whole, I wholeheartedly endorse its first five minutes (warning: violent):

42 Comments on “The Ghost Ship Moment”