On last week’s podcast, there was a passing reference to the “Ghost Ship Moment.” This is an idea I came up with back in 2003, while slogging through Ghost Ship on DVD. For those of you who aren’t diehard Julianna Margulies fans, this is a movie about a marine salvage team that finds a long-lost Italian ocean liner floating in the Bering Sea. They climb aboard and start poking around artfully rusted-out staterooms, and increasingly eerie things start happening. But somehow, the crew members refuse to accept that the boat is haunted, even after a bunch of them have died mysteriously. 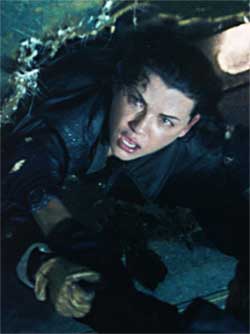 Insert your own "I'm on a boat" joke here.

This scene takes place an hour and seven minutes into the film. That’s only 19 minutes before the end credits. And even at this late stage, only Julianna seems to know what every single person in the audience does: this Ship has Ghosts.

It was probably around this scene that it occurred to me that certain movies are divided into two parts: the part before the characters know what kind of movie they’re in, and the part after. The Ghost Ship Moment (or GSM), in its most basic formulation, is when the characters in a film learn what you know from the movie’s title. For instance:

That last one reveals a crucial point about the GSM: it’s based on the main character’s viewpoint. Transformers begins with a Decepticon attack on a military base, but it’s when our protagonist realizes there’s more than meets the eye that the GSM occurs. So the Ghost Ship Moment in Ghost Ship occurs at about 54 minutes. Julianna has already seen fleeting glimpses of a little girl, but she’s not 100% convinced she saw what she saw. This is where it becomes undeniable.

And all at once, Julianna knows she’s on a Ghost Ship.

In some movies, the GSM is basically the first frame. The very first thing we see in Star Wars is the big ship blasting away at the little ship. (In Return of the Jedi, the GSM is when a mysterious hooded figure walks into Jabba’s palace. In Empire, I’d say it’s when those imperial walkers start kicking ass and taking names, but that one’s debatable.) And movies with vaguer titles generally don’t have a GSM. For instance, The Phantom Menace. Or Eyes Wide Shut. If it were called The Orgy, then it would have a GSM. I’d say The Matrix doesn’t really have a GSM, because someone who hasn’t seen it has no way of knowing what the Matrix is. The GSM is when the protagonist’s knowledge catches up with the viewer’s knowledge. When you learn information together, it doesn’t count.

Not all Ghost Ship Moments are easy to pin down. In Batman Begins, is the GSM when Bruce Wayne reveals his superheroic plans to Alfred? Or is it when he appears in costume for the first time? Or is it the very first scene, since everything that happens to Bruce is part of Batman’s beginning?

Jaws is another interesting one. Roy Scheider suspects there’s a shark after the first victim. But maybe the real GSM is when Hooper arrives, inspects the body, and confirms there’s a Great White on the prowl. Or maybe that iconic dolly-zoom on Chief Brody as that little boy’s yellow raft is chomped up. That’s the moment where he’s sure what the movie is about.

42 Comments on “The Ghost Ship Moment”