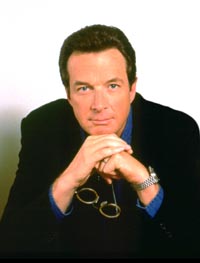 Sorry to once again be the (late) bearer of bad news, but the (late) Bard of Brachiosaurs, Michael Crichton, has died. Barring a mosquito that drank his blood on a beach vacation, then rested on a tree only to be stuck in the sap, trapped in amber, and preserved for millions of years until his DNA is extracted and cloned by intelligent lizard-scientists, the author of Jurassic Park will not give us any more books.

This news came as a surprise — Crichton apparently kept his cancer pretty secret, and he was only 66, but even though he’s a pretty major figure in our culture (at least I think so), he’s not really a celebrity, so I guess the surprise that he had been gravely ill and was no more was in itself not especially surprising.

I mean, everybody’s gotta go sometime, right? And if you’re going to go, better to go, you know, after your medical practice and after your big basketful of bestselling novels have pretty much all been made into generally classy movies of a variety of success ranging from “meh” to (somewhat briefly) “highest grossing movie ever.”

What I’m saying is that he had a good run, and I wish we could all do as much for people as Michael Crichton did.

If I may indulge, a few personal thoughts on Mr. Crichton’s achievements, what he’s meant to me, and why I’m sad to see him go…

I read Jurassic Park all in one sitting.

Well, I got up to go to the bathroom a couple of times, but my family used to drive back and forth from New Jersey to North Carolina for summer vacations, and I remember that I read the entire book in one day’s worth of driving. I was 13. But I just tore into it — I loved dinosaurs, and I loved Golden Age science fiction — guys like Robert Heinlein and Isaac Asimov who tended to isolate a certain human element in their stories and change specific things around that element, showing how people might react to new situations (not exactly an outlandish aim for science fiction, I know, but I was 13). And I loved dinosaurs.

To 13 or 14 year-old me, Crichton was a rush. I loved his style, I loved his subject matter, and I loved how much I learned about stuff when I read his books. It all seemed so fantastic, but a lot of it was pretty grounded in reality. I still refer to magnetically sealed doors (usually the kind that need to be unlocked via prox-cards) as “Jurassic Park doors.” Even the computer readouts seemed exotic.

In the early 90s to a 13 year old kid, Literature was Crichton, Clancy and Grisham — these were the pre-Rowling, non-romantic pop novelists who bridged the gap between genre fiction and event entertainment. I had one glorious summer with them – in 1993, I read a total of 11 of their books. I remember it was 1993 because I remember mentioning it in my 7th grade English class. Most of those had been read in a three-week period.

I was quite proud of myself, but I’d also had a blast doing it. And all those books were worn down and creased and weathered, because I brought them with me to the beach every day. There it was, sand, sun, surf, all of it, and there I was, slowly subburning while I plowed through Congo, full steam ahead.

It’s weird to say this about what was at one time the highest grossing film ever made, but Jurassic Park is an underrated movie. Yeah, there are other movies that were bright and captivating collaborations between Steven Spielberg, George Lucas (via Industrial Light and Magic) and John Williams that were better, and some that were worse, but almost every movie that comes out today owes something to Jurassic Park.

Yeah, Crichton didn’t really so much do the movie, and there are a ton of differences and “inaccuracies” and whatnot, but there’s a really keen tone to Jurassic Park the novel that I think inspired it — just a relationship between the book and imagination that connected really strongly with a lot of people.

My main thrust here is that, if you’re looking for a reason to criticize or discard a list of “top twenty this” or “top one hundred that,” and that list includes movie franchises or science fiction, Jurassic Park probably isn’t on there, so it’s probably a pretty good inroad to getting that criticism going.

After 1993, I never again read one of Crichton’s books. Eh, maybe I went back and picked up Rising Sun after I saw the Sean Connery / Wesley Snipes movie with the woman on the table (I think other things happened too, but that was all I remember). Maybe. But that summer never really returned, and I never really felt motivated to go back and read The Andromeda Strain again. I don’t think Michael Crichton’s deck provides that motivation for me.

But for me, Michael Crichton will always be associated with that very specific moment in time, which was a very important one to me in the maturation of my relationship with literature. And for that I thank him deeply.

Do you have any Michael Crichton thoughts/remembrances/stories? Share them in the comments!

Oh, and I haven’t mentioned why I remember I read Jurassic Park in one sitting.

Because after I finished it, I remember sitting in a family seafood restaurant of one sort of another (something beach-like) and relating every single event in the book to my family in rapid fire.

And then, the velociraptors started biting through the bars across the top of the command center . . . !

It’s a pretty common way that kids that age tell stories, but it’s very asymmetrical. It’s kind of bothersome to the listener, but downright thrilling for the kid. Every time a younger tells me a story like that, I make sure to listen, because behind that revving verbal engine their brain is probably doing something special.

And maybe it was inspired by the life and work of someone special, as well.

Pour one out for Michael Crichton. Mourn you till I join you.