Videogames lead a strange dual life.  On the one hand, we have what some writers have labelled the Ludic element, that is, the game as a pure game, a  systems of rules which can be manipulated, interacted with, mastered, and won.  On the other, you have narrative, a concept with which I assume you all are familiar.  Most pre-electronic games are purely ludic (chess pieces lack interiority).  Toys, on the other hand, encourage narrative:  you cannot win at dolls, but you can tell hella stories about them if you like.  Videogames tend to combine the two, at least to some extent.

Different genres have different relationships with narrative. On the high end, you have RPGs, which require gobs of it.  Platformers usually just have a sentence or two, like “Our Princess is in Another Castle” or “BANG! End of Rescue Attempt.”  Sports games are usually narrative-free… except for fighting games, which usually require a rudimentary sense of plot and character. (I’m sure many of us have fond memories of the geopolitical intrigue of Street Fighter II, or the overheated soap opera of Dead or Alive, or Little Mac’s boxing journey through the land of racist stereotypes.) And it is a fighting game that provides us with the boldest and strangest narrative in the history of gaming. I’m talking, of course, about Super Smash Brothers for the N64. 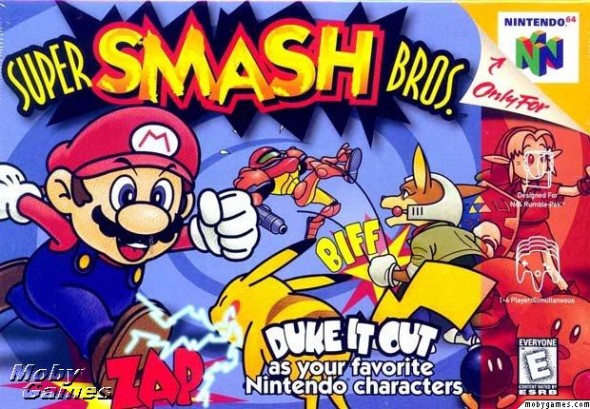 For all its brilliance, this plot is confined to two brief and elliptical scenes.  The first comes at the beginning of the opening credits – feel free to stop watching at 0:20, when the scenery changes.

This in itself is rather remarkable.  Most video games ask us to believe that the world in which most of the events of the game take place is “real.”  Smash Brothers requires exactly the opposite.  The scenery of the opening is quite clearly a child’s bedroom.  The Star Fox doll that gets dropped on the desk is quite clearly just that:  a doll.  When the desk turns into an arena and the doll springs to life, we’re witnessing the power of imagination at work.  A child is playing with his toys (or hers, but from now on I’m just going to say “his” for clarity’s sake).  Everything that goes on in the gameplay proper should be seen in this context.

And when you think of it this way, a lot of stuff about Smash Brothers starts making more sense.  Having characters from all of the Nintendo franchises might seem surprising and creative… but is there a person reading this who didn’t make their toys interact across franchise lines, as a kid?  It also explains the game’s curious focus on knocking your opponent out of the ring.  If you pretended your toys were fighting – and come on, we all did that, sometimes – you might well end up throwing the loser across the room. (After all, it’s hard to have one get convincingly “knocked out” when their eyes are painted open.)

It’s also important to note that the child in question is us, the player. I mean, we are the ones playing, right? And as we go along through the game, we use this same Disney-esque hand to choose from the in-game menu.  Note that the animation for this is extremely tactile:  you see the hand picking up a little disc and placing it on top of the item you select.  That opening sequence is a throwaway, true, but we’re never supposed to forget whose hand it is (ours) or what it’s doing (picking up and manipulating things).  You’re not supposed to forget that the combatants are toys, either.  Whenever you lose the game in the single player mode, the “Continue?” screen shows the doll version of your character lying in a heap on the floor.  If you decide to keep playing, it gets reanimated.  If you get bored and walk away, it stays on the floor where it lies… just like a real toy abandoned by a real child.

Maybe this time you should talk to the face.

So far, so good.  Now, if you play Smash Bros. all the way through on the single player mode, the final boss is an entity called the Master Hand. Look familiar?  The player-child has run out of action figures to play with, and is therefore making the last survivor (oh, let’s say Pikachu) fight his hand instead.  Not surprisingly, the ways that the Master Hand fights the action figure are the ways that a child would come up with for a hand to “fight.” It mimicks a gun, it turns into a “guy” by using its middle and ring fingers as legs, etc. But here’s where it gets freaky.  All throughout the game, you have won matches by knocking your opponent out of the ring.  The Master Hand is different.  After you hit it enough times, it just loses, and by “loses,” I mean “freaks the hell out and explodes.”  You see an intertitle letting you know that you’ve won the game.  Go ahead and watch the end of the final battle in the youtube video below.  The part you want is about 7:14 in.

Now typically in a fighting game, this would be followed with a little animation where Pikachu has a parade thrown in his/her honor.  Not so:  here, the closing animation shows Pikachu dropping onto that desk from the opening crawl.  As we watch, the life goes out of him, and he collapses, an inanimate doll once again.  Just as if you had lost the game, except this time you can’t continue.

I’ve come up with three possible interpretations of this, each more twisted than the last.

1)  Boredom: the child, having made Pikachu beat up everything in his room and his own hand, is completely bored, and has run off to do something else.  Not particularly dark, I know, but still an odd message to stick at the end of the game:  “Well, that killed a few hours, but you are officially bored of this now.  We, the Nintendo corporation, are telling you this.  Go do something more productive with your time.”  It also dramatizes something very real that happens at the end of all videogames:  the player gets bored, turns the game off, and walks away. More on this later. (And about that walking away:  pay close attention to the camera movement in that last shot before the fadeout.)

2)  Pain: A slightly darker variant of version 1.  The child has run off to do something else, because in the course of play he accidentally rammed Pikachu’s tail up under his fragile cuticle, and is now screaming bloody murder to his parents.  If this interpretation is accurate, the “You won the game!” screen should have had a subtitle saying “You caused real physical harm to a child!”  Way to go, hero.

3)  Down the rabbit hole: Let’s pretend for a minute that Pikachu’s transformation isn’t just the power of imagination at work.  Let’s pretend that the evocatively named Master Hand is God, or at the very least a gnostic demiurge, capable of bringing stuffed toys to life and making them battle for its amusement.  Suddenly, the game takes a much darker tone.  The final battle is no longer just the logical extension of the tournament:  it’s nothing less than deicide! Bracing stuff for a video game.  And it gets worse:  Pikachu thought he was striking down the oppressor of his people, but he was also striking down the only thing that gave them – that gave him! – life.  Without the animating will of the Master Hand, Pikachu ceases to be.  He came from stuffing, and to stuffing he will return.  And you know what?  Perhaps the Hand hasn’t been defeated at all.   Maybe the Hand was (har har) toying with Pikachu at first, and the explosion at the end was the first moment that Pikachu caused the hand any real pain. Without hesitating, the Player-Child-God withdrew Pikachu’s spark of divine fire, instantly reducing the electric mouse to a pile of lifeless cloth.   Pikachu has conquered the world, stormed Valhalla, and slapped the very face (well, palm) of God… and his reward for this is Oblivion.

Am I just Overthinking™ it?  Perhaps.  There may be something deeper here, though.  In a sense, to play a video game is to become a demiurge.  We don’t create life in the Frankenstein sense, but we do invest the characters with emotion and significance, causing them to “live,” even if it’s only a shadow half life, and only in our own minds.  That we force these “living” things to fight for our amusement seems so obvious as to not require explanation.  And eventually, we will defeat the game, or the game will frustrate us (that is, “actually hurt us”) so much that we walk away in disgust.  Either way, we’ll turn the game off — energy prices being what they are — and the characters will cease to be.  I find myself thinking now of my old copy of the original Final Fantasy.  How many joyful hours did I spend with you, my boon companions, the fighter, the white mage, the red mage, and the other red mage (one or more of whom may have been named FART)? How long did we struggle before we finally, together, triumphed over the ultimate evil, Chaos?  How quickly, then, did I turn the game off and move on, transforming you into a mere pattern of bits locked in a grey plastic tomb (which I now imagine hurtling through space like the Phantom Zone in Superman II, despite the fact that it is actually sitting in a Staten Island landfill)?

And that’s why the story of Smash Brothers is so compelling.  The game is never anything other than a fun time, but for just a moment there at the end it draws back the curtain, and exposes the peculiar psychosis that lies behind all videogames.

Note:  Wikipedia informs me that the two Smash Brothers sequels added some kind of “official” explanation of the Master Hand involving a dimensional rift, a super-boss named Tabuu, R.O.B. the Play-Along Robot, and an infinite army of “Shadow Bugs.” This is deeply disappointing, but it would not be the first time that sequels have undermined an intriguing philosophical premise, nor indeed the first time that an infinite army of bug-like monsters was involved.