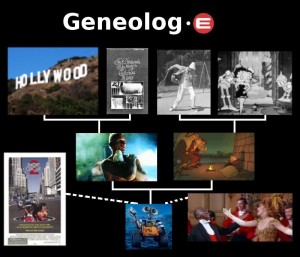 Screenshots identified and connections explained, after the jump. Spoilers for many movies are found below. I don’t want to give away the titles yet, because the reveal is part of the fun… just proceed with caution, all right? 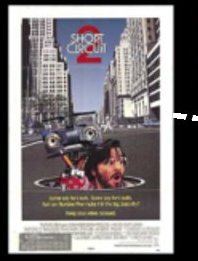 Let’s get this one out of the way,  Yes, there’s a resemblance.  Mostly around the eyes.  But Short Circuit, deep down, is about people teaching a robot how to be human.  WALL·E is just the opposite. There’s not much more to say here, except, of course, “Johnny Five, Alive!” 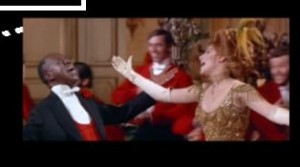 There’s also a resemblance to Hello Dolly, which WALL·E quotes from so memorably, but it’s only skin deep.  Hello Dolly is fantastically weird in so many ways…  (Barbara Streisand Louis Armstrong skat-singing duet, anyone?)  First of all, the financially disastrous 1969 film is an adaptation of the wildly successful 1964 musical, which is a setting of the 1955 Thornton Wilder expansion of his own 1938 version of an 1842 German adaptation of an 1835 play by John Oxenford, who conveniently enough (according to Wikipedia) “did much by his writing to spread the fame of Schopenhauer in England.”  The fact that the story so old, and that it’s been lacquered over so many times, might go some length to explain Hello Dolly‘s perverse and grim moral, which is that appearance trumps essence every time.  Consider the title song:  Dolly (Streisand) used to live in New York City, and while she lived there she used to go to this one restaurant.  For the past ten years or so, she’s been living in Yonkers.  During the play, she hops a train down to Manhattan and goes back to the restaurant, causing the staff to spontaneously burst into song.  “Hello, Dolly/ Well Hello, Dolly/ It’s so nice to have you back where you belong…” (Apparently she was one hell of a tipper.)  Here’s the thing.  The chorus ends with a chanted refrain of “Dolly will never go away again!”  Streisand doesn’t say anything to contradict them. Heck, she sings along.  And that’s funny, because you know where she goes about two scenes later?  Right the fuck back to Yonkers!  She was lying through her teeth! But it’s still supposed to be a happy song.  Because appearance trumps essence.

You also get this in the love song, “It Only Takes A Moment,” which was featured heavily in WALL·E.  Here’s a video of that,

and in case you’re reading this somewhere you can’t watch, here’s the lyrics of the chorus.

“I held her, for a moment,
and my arms felt sure and strong
It only, takes a moment
to be loved a whole life long.”

Basically this is about love at first sight.  Which is fine.  It’s a standard comedy trope, even though we all know that it’s nonsense.  But this song actually trades on the nonsensical aspect.  Look at that last line:  “It only takes a moment to be loved a whole life long.”  This is SUPER nonsense, unless you change the first part to “I held her/ for a moment/ then we goooot hit byyyyyy a traaaaaaaaiiiiin.”  I mean, would you accept “It only takes a minute to be loved a whole hour long?”  It’s a stupid stupid stupid line… or actually kind of a great one, since it drives home just how impossible the characters’ romance is.  Irene is a sucessful but struggling hatmaker.  Cornelius is a dirt-poor store clerk, who has been lying to her since the moment he met her by claiming to be fabulously wealthy.  This again is a pretty standard comedy trope, but what really sets Hello Dolly apart is that Irene doesn’t even care that she’s been lied to.  As we find out, she knew he was poor all along, and just decided to go with it.  Not because she’s seen what a good person he is deep down (which is how a more standard rom-com would let Cornelius win the girl, although in real life it would have won him an slot on the Jerry Springer show), but because she wanted to pretend she had a rich boyfriend.  She’s so infatuated with the idea of the wealthy Cornelius that she’s willing to accept the reality of the poor one.  Appearance doesn’t just trump essence in Hello Dolly, it drags essence out the back exit and curb stomps it in the alley behind the casino.  WALL·E, on the other hand, has the much more traditional Hollywood message that essence trumps appearance:  the title character, who looks like the trash he compacts, is the most lovable being in the universe; the doughily deformed Ugly Americans that inhabit the Axiom turn out to be heroic and noble while the healthy and well-dressed Buy’n’Large CEO turns out to have been a villain; etc. etc.

The way I see it, WALL·E is adopted.  Short Circuit and Hello Dolly are his birth parents (the resemblence is definitely there), but his value system and personality come from his close-knit adoptive family. 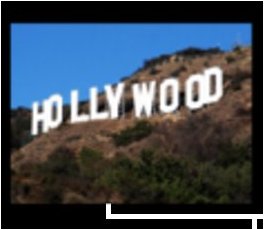 First and foremost, WALL·E is a Hollywood movie.  That’s where it gets the “essence trumps appearance”  from, and the tacked on happy ending about the magical healing power of twue wove.  And, arguably, the stupendously competent and sexy (for a given value of “sexy”) female lead, although EVE is pretty well rounded.   WALL·E is a strange movie in a lot of ways, but it’s at least %25 Hollywood. 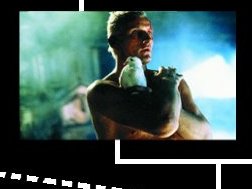 Mother: Blade Runner. Sounds stupid, right?  Not so.  Check out the features!
• Dystopian Future
• Mankind has fled into space to escape a dying earth
• Robots have more humanity than the humans they were built to serve
• Bizarre unicorn dream sequence in the director’s cut (hey, you don’t know there won’t be one)
• Protagonist who at least might be a robot himself

(Apparently this famous speech was improvised off the top of Rutger Hauer’s chiseled blond head.)

And the parallels get downright eerie when you refer to WALL·E‘s
Maternal Grandmother: Phillip K. Dick’s Do Androids Dream of Electric Sheep.

• Earth is dying specifically because it’s buried in garbage

• Lower life forms (plants in WALL·E, animals in D.A.D.O.E.S.) are fetishised by humans and robots alike

• Accordingly, a major plot development hinges on the main character’s discovery of a living species widely thought to be extinct

• the ability to love – not one’s worthiness to be loved, or anything biological – turns out to be the thing that makes us “human.”  (Note that Hello Dolly, where the big romantic song is about being loved, seems a little self centered by comparison.) 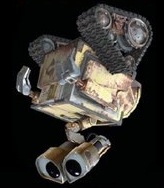 The evidence starts to pile up like kipple.  But these are only thematic similarities.  The films are nothing alike in terms of style – and that style has to come from somewhere. 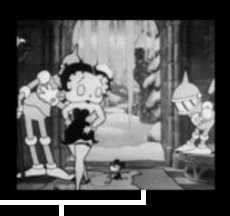 Obviously WALL-E is an animated film, and you would expect to find some engagement with that heritage.   So Betty here is an almost arbitrary stand-in for the rich American tradition of animation.  But there is something rather Boopish in the character of EVE.  Both are “hot” without looking like anything humans recognize as sexy, there’s something decidedly odd about the way their heads connect to their bodies, and the male characters end up trying way too hard to impress them.

(Complete with authentic 1930s racism!)  Still, the similarities between WALL·E and Betty Boop are veiled.  Not so with WALL·E‘s… 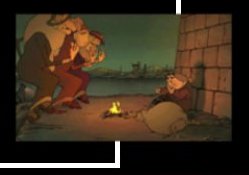 Mind you, there’s not much possibility of actual influence in this case:  the first concept development of WALL·E began in 1995, and Belleville didn’t come out until 2003.  But both films focus on decrepit but adorable and adoring protagonists (WALL·E, Madame Souza) who go on epic journeys to rescue physically imposing but emotionally unresponsive beloveds (EVE, Champion).  Both are essentially devoid of dialog (Belleville much more so than WALL·E), and capitalize on this fact by making wildly imaginative use of sound effects.  Finally, more prosaically, each uses an animation style that runs to caricature instead of realism, especially where human beings are concerned.

And doesn’t Madame Souza look just a little bit like WALL·E? Again, around the eyes? 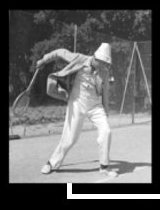 Finally, there’s the Paternal Grandfather:  Les Vacances de Monsieur Hulot. When Belleville came out, everyone and his uncle was quick to point out the film’s debt to Jacques Tati’s most famous creation.  No one seems to have made that connection with WALL·E yet (probably because it’s not French), but it works almost as well.   Both are sound films with the spirit of silent films.  Both films are as concerned with sweetness as they are with funniness.  And Hulot and WALL·E are pretty similar characters.  They’re agents of chaos: wherever they go, organized systems fall apart.  This isn’t because they’re trying to smash the state, the way that other comedic anarchists (like the Marx Brothers, or this guy) might.  They’re just walking disaster areas.

What sets WALL·E apart, here, is that his chaos is contagious.  Every time he comes into contact with a character (EVE, MO, the Captain, Mary and John) he shocks them out of their complacent routine and teaches them to love… and also to rebel. Which brings up the one other character that WALL·E might be based on (not pictured on the graph): Jesus H. Christ. This is pretty interesting, actually. Usually when a movie has a Christ figure, they focus less on “Come with me, and I will make you fishers of men,” and more on the whole “dying for the sins of the world” bit. It’s nice to see a different take on it. (Except, oh wait, WALL·E ALSO did the whole martyrdom thing. So never mind.)

And there you have it.  I think we can call this DNA pretty well sequenced.  If you think I’ve missed something, let me know about it in the comments!

Or read more from… Movies, Nature vs. Nurture, WALL-E