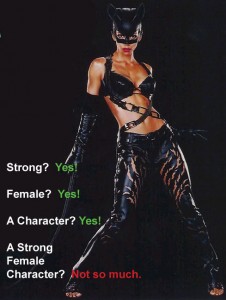 Last night I finally saw the 2007 Transformers movie.  It was OK, in a Michael Bay sort of way, but it clearly was made for a very specific audience: young white nerdy men who wish they could bone models after watching them sexily fight robots so sweat cascades down their luscious tanned bodies. All right, fine. If you must, Michael Bay. I’d prefer if you objectified some hot men every once in a while, but I understand that you think that would make you gay, and you don’t want that, Michael Bay. I understand.

But then I see this quote from Megan Fox, the actress/model playing main hottie of the film:

“Both of the female characters in the movie were very strong characters. Rachel [Taylor]’s character is very intelligent. I thought that they were representing women very well.”

That’s the last straw. It’s bad enough that they make movies that objectify women, but then to call those women Strong Female Characters? I do not think that phrase means what you think it means, Megan Fox. 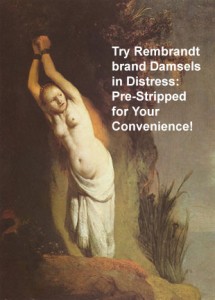 Once upon a time in movieland, female characters were the designated Damsels in Distress. They were tied to railroad tracks, trapped in burning buildings, falling to their deaths, waiting for Superman to save them. While the hero fought the Bad Guy, they’d sit in the back biting their fingernails instead of running away to get help or throwing a punch of their own. Sometimes they’d seem smart, strong, and assured until the villain grasped them by their arm, leaving them powerless. Oh, and the swooning. Sometimes there was swooning.

Along would come the Hot Hero, strong, rugged, with a square jaw and stony buttocks, to save the day. As in the heroic tales of old, their prize for defeating the villain would be the chance to shag the Damsel and live happily ever after.

All in all, the Damsel in Distress was kind of a terrible character, but at least she did end up with the hot hero at the end. Sure, he might have anger issues or just be a tool; then again, he was also probably a prince or a cowboy or a hot PI or a superhero – or if the hero was a regular “everyman” he’d still be a Clark Gable or Cary Grant or Humphrey Bogart – so it wasn’t all bad.

Somewhere along the way feminism happened and the wymyns were all, “Um, no?” It took a while, but some writers in Hollywood got the idea. No more would female characters be Damsels in Distress. No, there should be Strong Female Characters in cinema– emphasis on “Strong.” While these women would still be young and hot, they’d also have one characteristic that made them more masculine. It could be physical strength or a superpower (see Liz Sherman in the first Hellboy movie), the ability to shoot a gun properly (Princess Leia), or something more metaphorical, like being able to out-drink a guy (Marion from Raiders of the Lost Ark). Writers patted themselves on the back, saying, “You wanted Strong Female Characters?  Well, now they’re strong.”

Yeah, trouble is, while these characters were marginally better than the original Damsels in Distress, they still ended up having to be saved in the final act by the male hero. There would usually be a scene or three where the “Strong Female Character” would be trapped by the villain and put into sexy clothing, I guess as a punishment of some sort. And even when she was being strong, she was always doing it in the sexiest way possible. She’d never, say, get a black eye or a broken nose in a fight. Her ability to fix cars (a powerful, masculine trait) would allow her to get sexy grease all over her slippery body. Her ability to shoot a gun was so the film’s advertisers could put her on a poster wearing a skimpy outfit with a big gun between her legs. In short, the “strength” of her character was to make her a better prize for the hero at the end – and for the horny male audience throughout. 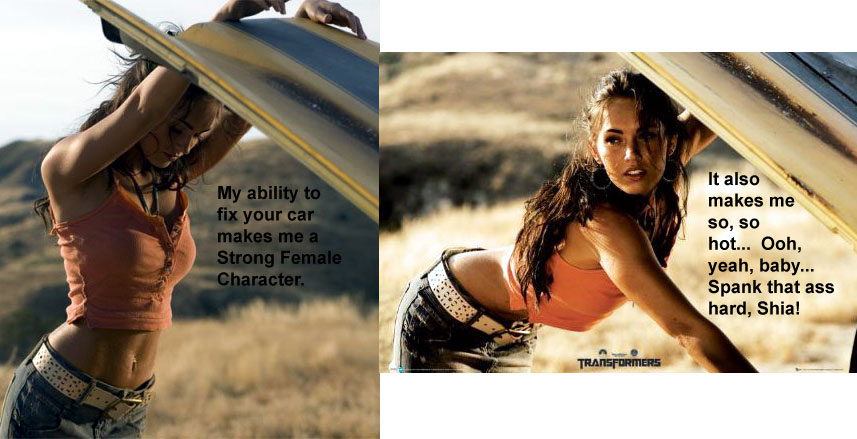 And the heroes got worse, too. Yeah, these Strong Female Characters would sometimes be rescued by the Hot Hero. More often, now, they’ll be saved by the Schlubby Everydude. Apparently somewhere along the line directors decided that film heroes should be more like audience stand-ins: dull, scrawny, nerdy. So you wouldn’t have Hot “Strong” Marion sleeping with Hot Strong Indiana Jones at the end anymore. You’d have Hot “Strong” Megan Fox sleeping with Weaselly Weak Shia La Beouf at the end. One thinks, if this female character is so strong and so hot and so great in every way, why in the world would she end up with that loser? Oh.  Because he’s the audience stand-in. That makes perfect sense.

Some movies nowadays go even further. They pile up one awesome trait after another on top of this sexy female character, thinking it will make them “stronger.” Consider Rachel Taylor’s character in Transformers, who, Megan Fox claims, is an intelligent, Strong Female Character. Of course! She’s a 23-year-old, model-thin super-attractive super-genius hacker who is so very smart that everyone in the Pentagon spends the whole movie looking at her dumbly because she’s just so much better than them at everything. As A.O. Scott said in his Wall-E review, this is the female character (like EVE) who is “a supermodel who also happens to be a top scientist with a knack for marksmanship.” 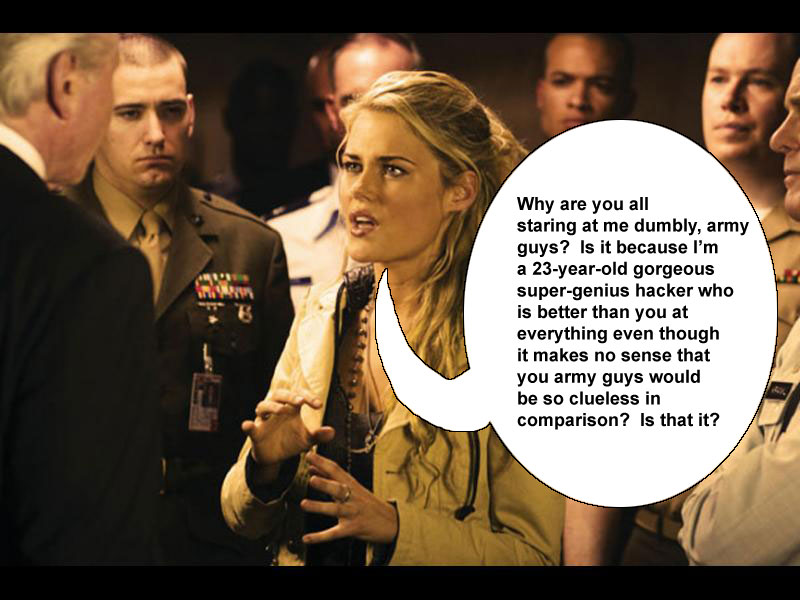 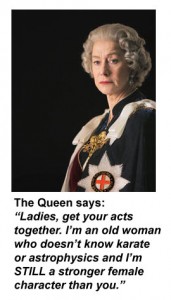 Good characters, male or female, have goals, and they have flaws. Any character without flaws will be a cardboard cutout. Perhaps a sexy cardboard cutout, but two-dimensional nonetheless. And no, “Always goes for douchebags instead of the Nice Guy” (the flaw of Megan Fox’s character in Transformers) is not a real flaw. Men think women have that flaw, but most women avoid “Nice Guys” because they just aren’t that nice. So that doesn’t count.

So what flaws can female characters have?  How about the same flaws a male character would have? This is especially important in comedies, because many male writers are so clueless about writing funny women that female characters in sitcoms, sitcomish-movies, and comics tend to be the Smart, Gorgeous Snarky Voice of Reason in an unreasonable world. In other words, Not Flawed and Not Funny.

Etcetera. They don’t have to be physically strong, although they can be — The Bride, the women from Crouching Tiger Hidden Dragon, Ripley, Sarah Connor, and even the half-naked Faye Valentine from Cowboy Bebop are strong Strong female characters. Strong just means they have their own goals that move beyond “I want to do whatever the male hero wants to do” or “I want to marry the male hero.” “I want to have a baby” is moderately better – moderately. Let’s try to be a little more creative, huh? 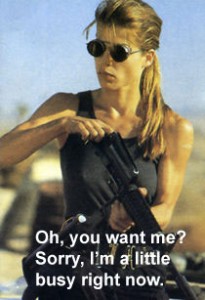 (Brief interlude: And, by the way, it’s OK if these women are hot. The characters I just mentioned above [The Bride, the Crouching Tiger ladies, Ripley, Sarah Connor, and Ms. Valentine] are all quite attractive. But they also DO get beat up and they DO look like they could kick your ass. Except for Zhang Yiyi, who’s like thirty pounds – but she at least looks graceful enough that she could fly and kick your ass with a sword, and she looks angry and batshit enough that she’d do it twice. And they all have their own goals, flaws, and back stories. I don’t want you thinking I have something against attractive women.  I am one myself, after all!)

Once your female characters have some depth to them, it doesn’t really matter if the male hero saves them or not. For instance, Batman saved Rachel Dawes a couple of times, but I never saw her as only a Damsel in Distress, because she was her own person with her own moral code and own heroic goals to clean up Gotham with her Lawyer Powers. There was nothing in her background that led me to believe she’d be able to fight supervillains single-handedly, so when Batman has to save her (just like he saves everyone else), it’s believable. If, say, she had beaten up the Joker with her super kung fu skills she learned in self-defense class and her super-powered mace she developed in her own chem lab after she got her PhD from Harvard, and her makeup and hair still looked good afterward, then she’d be LESS of a Strong Female Character. She’d just be some image of what the nerdy male audience wants in a damsel.

My work here is done.

124 Comments on “Why Strong Female Characters Are Bad for Women”