Once again, Overthinkingit hops into the saddle for Stacie Ponder’s Final Girl Film Club. This month’s pick:  The Car.

Can we all just take a minute to consider how stupid that title is, by the way?  Sure, there’s a proud tradition of naming horror movies after the thing that’s doing the killing:  “Anaconda,” “Piranha,” “Bats,” “Orca,” “Leeches!,” etc.  etc.  These all work as titles because the things they refer to are scary, or at least used to be until Free Willy came out. I get nervous when I see an anaconda at the zoo.  I twitch a little when I type the word piranha – have you seen pictures of these bastards?  “The Car” isn’t going to do the trick.

Yes, I know carbon emissions are destroying the planet.  Don’t care.  I know that drunk driving is the number one killer of Americans aged 1-29.  Still don’t care.  Cars aren’t scary.  It doesn’t matter how many people they kill.  I mean, would you go to see a horror movie called “The Heart Disease?”  At the very least, they could have used this for the tagline… 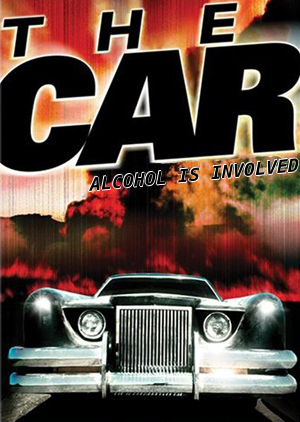 Title aside, The Car is a pretty sweet little horror flick.  Think “Jaws” meets “Vanishing Point,” and you’ll be more than halfway there.  The acting is well above average for this sort of thing, and James Brolin’s ‘stache is large and in charge.  The female lead, played by Kathleen Lloyd, is pretty much everything women in horror usually aren’t:  smart, brave, funny, capable, and alive at the end of the film eh, four out of five ain’t bad.  The cinematography is also a treat.  The film was shot somewhere in the southwest, and they took full advantage of the wide open spaces and the austerely beautiful landscape.  There must be a dozen sequences in the film where the Car enters the frame as a miniscule dust plume or windshield reflection, far off in the distance, but hurtling closer at the speed… of evil.  I never got tired of it.  I also liked the focus on the cast off debris of the Car’s victims:  a twisted bycicle wheel, a flattened french horn, a broken pair of glasses.  You wouldn’t want to take the thing too seriously:  there’s a scene where the Car knocks Brolin out by opening its door into his face.  Still, if you like high speed chases and explosions, there are much worse ways to kill a couple of hours.

Let’s briefly talk music, since the score is really fantastic.  It was written by Leonard Rosenman, a two-time Oscar winner and pupil of Arnold Schoenberg who got his start in the movies through his personal friend James Dean.  (What?!)  The Car really benefits from the “traditional” orchestral score.  With the cheese factor already so high, I’m not sure this film could have survived a 70s pop soundtrack.  It does kind of give the game away, though… The characters in the film take a long time to figure out that the car is driving itself.   But if the audience didn’t realize that the Car was really just the devil from the film’s alternate tagline (“IS IT A PHANTOM, A DEMON, OR THE DEVIL HIMSELF?”), or from the epigraph by Church of Satan founder Anton Szandor LaVey, the fact that the score begins with a quotation from the Dies Irae would have probably tipped them off.

Sadly, the soundtrack doesn’t seem to be commercially available anywhere…  for now, you’ll have to make do with this little clip of the title theme.  Listen to it on headphones if you can – there are some pretty rad panning effects, which are kind of unusual for the style.

3 Comments on “What Evil Drives”