Devout followers of this blog will have noticed that I have had horror on the brain over the past few months. (To those of you who scare easily, I apologize.) I’ve been taking a class on horror movies, so I was watching a bunch of them, and hey: you’ve got to write about something. Well, the class is over now. I’m not saying you’ll never see another horror post from me, but they’ll probably be few and far between. Before I bid farewell to the genre, though, I want to share one more movie with you all. Ken Russell’s Lair of the White Worm. 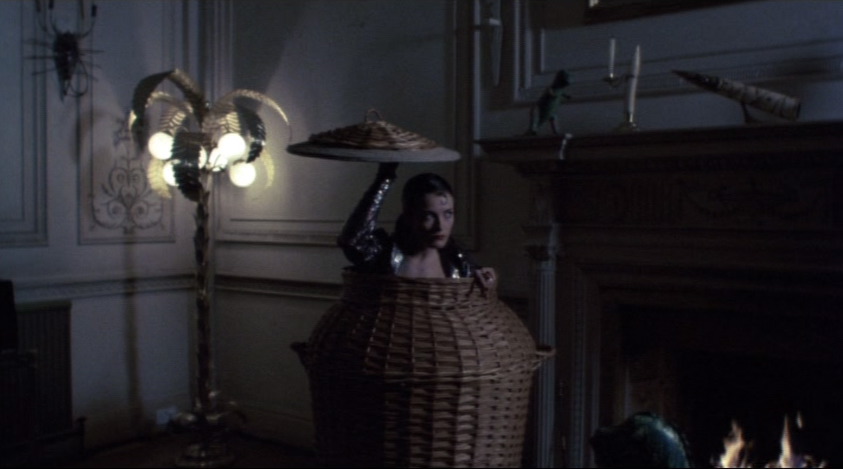 As with everything I write about movies, there are spoilers ahead. And if you have even the slightest intention of ever watching this movie – which you TOTALLY SHOULD – please stop reading right now. Lair of the White Worm is so weird, so gleefully bonkers, that a full %70 of my enjoyment of the film came from the surprise factor; from the “Oh my god did that just really HAPPEN?! Am I WATCHING this?” aspect of the experience. And I wouldn’t want to ruin that for you. But if you are never going to watch it anyway – and I’ve got to imagine that applies to most of you – then by all means read on. Note: some images below the jump could be classified as NSFW. Not in the way we usually think about these things, but still… it’s a hard R, you know?

So like I said, Lair of the White Worm is a Ken Russell film. Ken Russell is a pretty interesting guy, known for Oscar nominated adaptations of DH Lawrence, BBC documentaries, the film version of Tommy, and for appearing on the British edition of Celebrity Big Brother last year at the age of 80 (where he kept the other housemates awake with thunderous snoring). He also made Lisztomania, a film in which Ringo Starr is cast as the pope, and Rick Wakeman from Yes is cast as the norse god Thor. Russell definitely an “artist,” a “great director,” but his movies are weird and polarizing, and his overall career rating at Rotten Tomatoes is %56.

In terms of straight-up weirdness, Lair of the White Worm is hard to beat (although Lisztomania could take it to the cleaners… did I mention that Ringo Starr is the pope?). It’s roughly based on a book by Bram Stoker, who in turn based it on some dragon legends from Britain’s North Country. Yes, “Worm” in this case is the old anglo-saxon “Wyrm,” meaning “dragon” (as one of the characters helpfully spells out for us within the first ten minutes of the film). According to the legends, the dragon was killed by the local lord, John D’Ampton, when he came back from the crusades. And to this day (in the world of the film), his family celebrates the event by putting on an annual crazy puppet show cum folk-rock dance party for the locals. 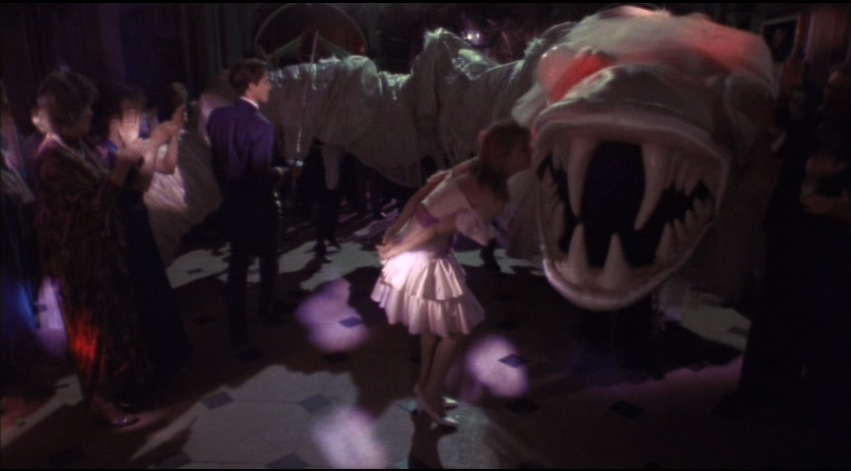 And just in case you can’t make it out in the image above, yes, that is a young Hugh Grant playing the part of the current Lord D’Ampton. Grant is quite good in this, but it’s kind of weird to see him act without slipping into his nebbishy Hugh Grant persona. You know, that charming/befuddled thing he does where he talks and acts exactly like Woody Allen only gorgeous and with a British accent? 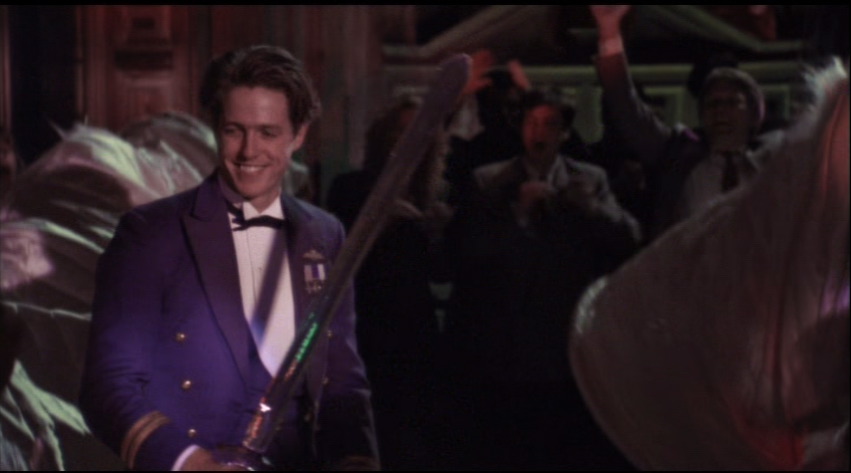 The film starts off with a visiting archaeologist unearthing the skull of the D’Ampton worm. It turns out those legends weren’t just legends after all. What’s more, the worm wasn’t just a worm: it was the pagan snake god Dionin. And gods are hard to kill permanently. It turns out that Dionin is still around (perhaps hiding in some sort of… lair?), and so is his posse of creepy snake-vampire cultists. (The vampire aspect appears nowhere in Stoker’s novel or the original legends. Russell threw it in for the film, presumably thinking that if you’re going to market something as a Bram Stoker adaptation, it had better well have vampires in it.) 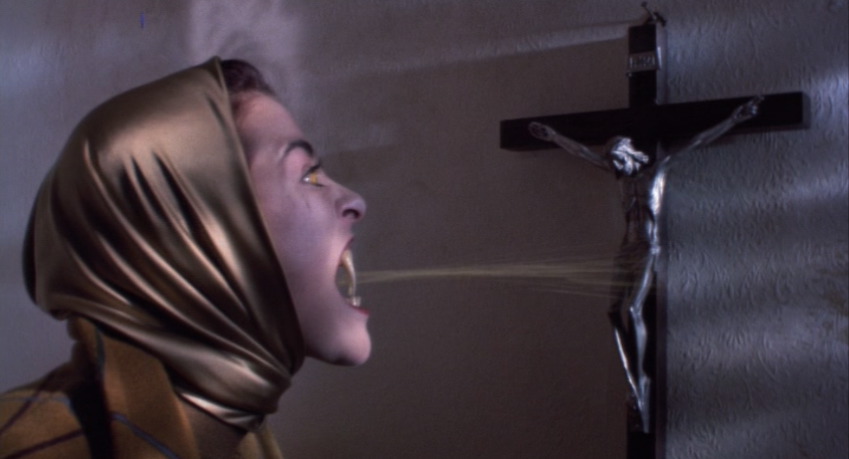 This is the Snake Vampire head honcho No. 1, Lady Arabella Marsh (Amanda Donohoe). Donohoe’s performance is one of the best thing about this movie. And I’m not saying that just because she spends a lot of time walking around in her underwear, really. Even though you find out pretty much right away that she’s quite a cold-blooded killer (ha! Because she’s a reptile, get it?), you end up pretty much rooting for her, if only because she seems to be having so much more fun than any of the other actors. She spends most of the movie – well, she spends a lot of it just flouncing around, tossing off one liners, and generally portraying the sexy sexy danger. But she’s ostensibly trying to return Dionin to power by performing a human sacrifice. A virgin sacrifice. Which is hard, since, as she puts it, “Virgins are in such short supply these days.” Luckily for her (what are the odds!), Hugh Grant’s love interest just happens to fit the bill.

From that point on, it writes itself. Or it would, in the hands of someone other than Ken Russell. In Russell’s hands? Not so much. Because along the way, for some reason, THIS happens. 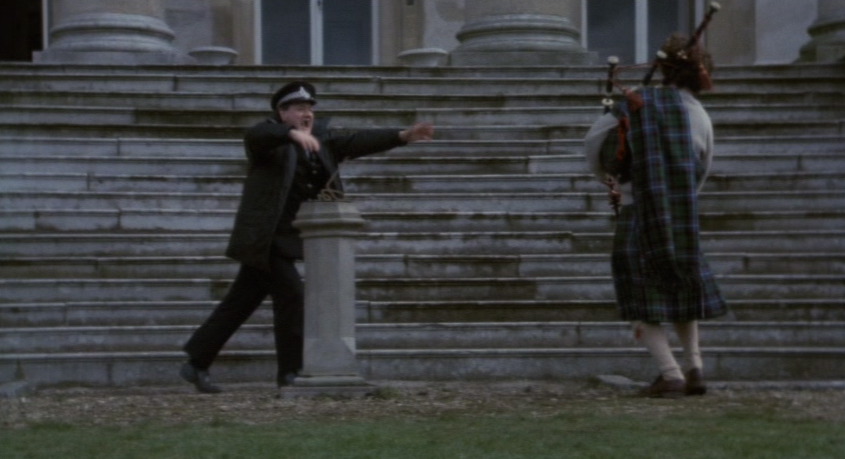 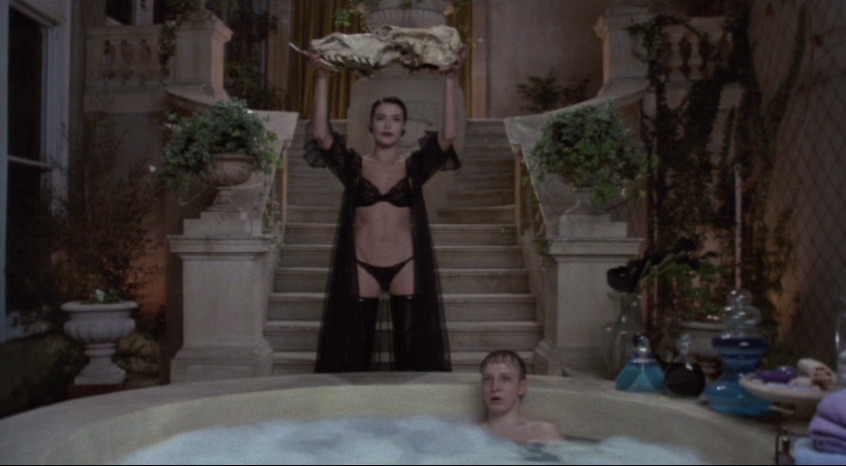 Lady Sylvia: “To die so that the god may live is a privilege, Kevin. And if you know anything about history, you know that human sacrifice is as old as Dionin himself… whose every death… is a rebirth… into a god ever mightier!” [Doorbell rings.] Lady Sylvia: “Shit.” 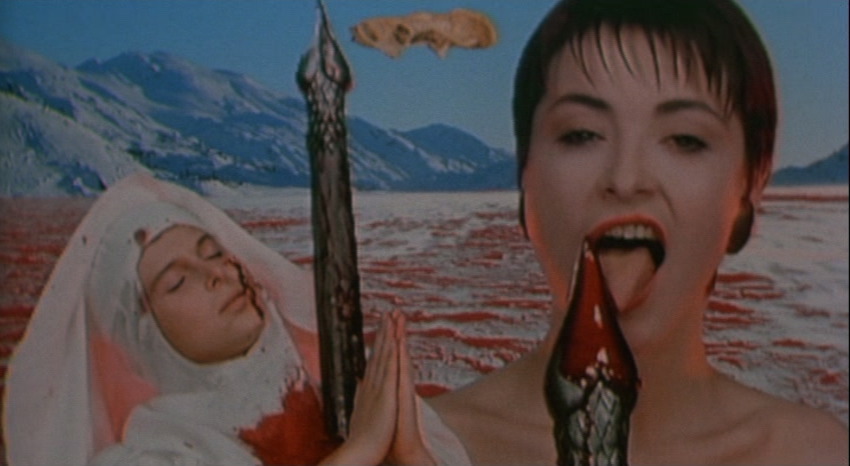 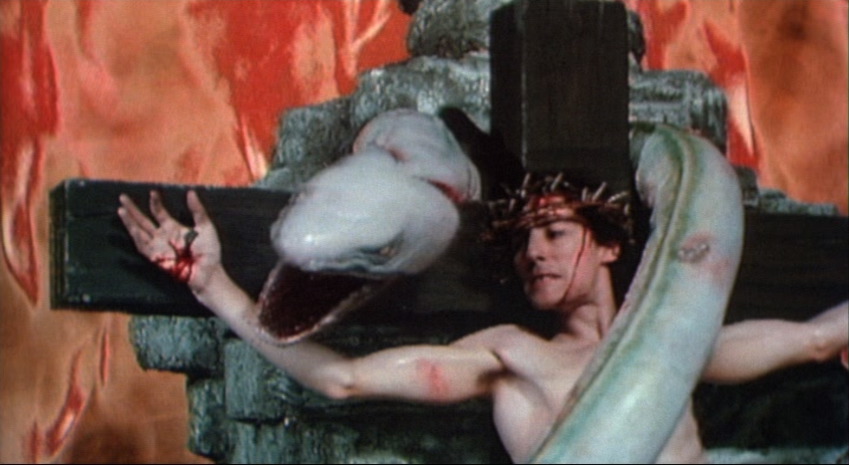 That last image makes me think of something… I wonder what it could be?

There’s a lot more that one could say about this movie. Just tracking through the blatant phallic and yonic symbols would take a post and a half. Trying to answer the perennial question of “Sexist? Or holding a dark mirror up to sexism?” would take at least two more. And it has more fun sneaking visual references to the title into the frame (in the form of garden hoses, earthworms, etc.) than any movie I’ve ever seen with the possible exception of John Woo’s Face/Off. But I think the pictures tell you more about the movie than anything I could write. If you find them hilarious, or disturbing, or hilariously disturbing, Lair of the White Worm is a must-see.

6 Comments on “A Farewell to Horror: Lair of the White Worm”