So I just watched Abel Ferrara’s trash classic Ms. 45. (Thank you, Netflix.) Sweet crap on a crutch, what a movie. Note that I don’t put an adjective between “a” and “movie”: not “what a disturbing” movie, not “what a fricking awesome movie,” not “what a confused movie” or “what a sexist movie”… although it is manifestly all of these things. Further spoilerriffic analysis after the jump, plus two soundtrack clips that are SO worth hearing, even if you have to close your eyes and click randomly around the spoiler-laden text until you come across the link. 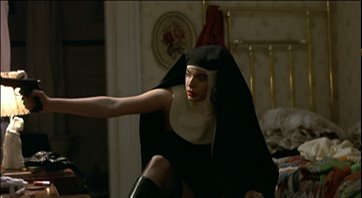 For those who don’t remember the plot, or who decided to read this spoilers and all, here’s a refresher. Model/actress/musician (and eventual casualty of cocaine abuse) Zoe Tamerlis plays Thana, a beautiful, innocent, mute seamstress-cum- haute-couture-sweatshop-worker. See, the fact that she’s mute represents how women everywhere are mute! Kind of! Let this character sketch, and the picture at the left, serve as your introduction to the allegorical clusterfuck that is Ms. 45. Nothing – but NOTHING – happens in this movie that doesn’t play into the metaphorical argument somehow, so if you don’t like your symbolism heavy handed, take your DVD rentin’ money elsewhere. (Then again, this wouldn’t be the first time that heavy handed symbolism has produced awesome results.) Anyway, within the first ten minutes of the film, Thana gets raped twice. (See, the fact that she gets raped represents how women everywhere… egh. ) The presentation is suitably horrific, and it also sets up the venerable rape-revenge plot that motivates everything from The Rape of Lucrece to The Virgin Spring to Last House on the Left to last year’s The Brave One. Nothing that happens from here on out should be surprising. Thana is going to get revenge, but her revenge will get more and more extreme until eventually we’ll come to wonder if – in getting revenge – she has become as monstrous as her victims. (In the early versions of the rape-revenge plot, she would kill herself out of shame and then her father or husband would get revenge. So this is… progress? I guess?) 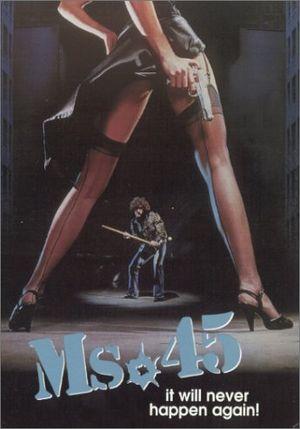 Sure enough, that’s exactly what happens. Well, the one small twist is that she never gets revenge on the first rapist, although she brains the second one with a steam iron halfway through his attack. Instead, she just wanders around at night shooting men who are being sexually violent to women. Or just men who are being sexual to women. Or just men.

So as you can see, on the level of plot, there’s not much to it. And no one would call it a character study: Thana is the only character we spend any amount of time with, and she doesn’t talk. (Mind you, as Fenzel pointed out to me once, this makes it easier to identify with her. She doesn’t say anything we wouldn’t, so we can project whatever thoughts we want onto her, dig?) No, labored symbolism aside, Ms. 45 is all about surface and style. But god, it has style coming out of its fucking ears. Compelling images. Canny musical choices. Bizarre camera angles. The works.

An interesting thing about Ms. 45 is the way that it flirts with the vocabulary of the horror film. One of the rapists wears a creepy mask that’s straight out of a sub-Friday-the-13th slasher flick. The music often, especially in the first half of the film, sounds like something out of Halloween or The Exorcist. There’s a visual reference to the shower drain from Psycho, and a bizarre, hallucinatory gore effect, in which that same drain starts spewing chunks of raw chicken. At one point, it is strongly implied that Thana is going to eat the second rapists’ corpse. (Cannibalism is pretty weird for a horror film these days, but it used to pretty much come with the territory.) And when Thana gets ready to go out on her rampage, there’s a great shot of her putting on an absurd amount of makeup, essentially turning her own face into a horror mask… although she’s still a lot easier on the eyes than, say, Gunnar Hanson.

But during that same scene, it stops being a horror movie, almost permanently, because this badboy pops up on the soundtrack. (Awesome!) The same kind of music plays under most of her first killing spree, and I would have a hard, hard time experiencing it as scary, or alienating, or really as anything other than flipping sweet. The same kind of thing happens with the visuals. There’s an overwhelming sense that Thana’s spree killings are not only justified, but cool.

So the movie’s really about female empowerment, right? Well… Rape-revenge movies generally aren’t. (See, the sexism lies in the fact that a man wouldn’t have to get raped to turn into a badass… although it might help if you killed his parents in front of him.) And although you do identify with Thana a lot while you’re watching this, she’s less a character and more an embodiment of the sexy, sexy danger. (I never thought I’d see the day that I’d link to someone’s livejournal page, but “Bad Goth” gets the point across, whoever he or she is, and I can’t remember where I originally saw that phrase.) What’s worse, almost all of the people that she kills in this early stage are black, latino, or arab. Towards the end, when she starts killing white people, the music and cinematography turn back into a horror movie again. So you could walk away from this movie thinking that the message was “female empowerment is awesome because we can use them to cleanse our cities of those rascally minorities.” On the other hand, there’s at least a suggestion that Ferrara is trying to make a different point: both of the rapists are obviously white, and her white boss sexually harasses her, so the message could be “militant feminism is pretty rad, but it has a tendency to choose its targets poorly.” (This might be supported by the identification of Thana with avant-garde jazz, which is, after all, african-american music.) Even so, this aspect of her rampage is a little queasy-making, as is the movie’s denoument, in which Thana loses her avenging-angel aspect and becomes a more straightforward example of the monstrous feminine. First, she appears to murder her neighbor’s dog, instantly causing the audience to lose all sympathy for her. Then the horror movie music comes back. Then she goes on a killing spree at the office halloween party, shooting her loathsome boss and a bunch of other (notably white) men before she’s brought down by a female co-worker weilding a phallic cake knife. And when I say phallic, I don’t mean in the usual film-studies shorthand which identifies all knives as phallic. I mean phallic like “she holds the knife in front of her crotch like it was a wang for a solid twenty seconds before using it to stab Thana in her crotch.” (To be totally fair, you can’t really tell where she stabs Thana, but you can tell that it’s a lot lower than most people in movies get stabbed. Like I said: an allegorical clusterfuck.)

Two things redeem the end of the film, though. One is this song, which plays at the beginning of the Halloween party sequence. There are a few interesting points here. First: flippin’ sweet! Second: the saxophone never appears on the soundtrack except when Thana is out shooting people. So although this music is very different from the earlier cue, it’s still clearly her song. In fact, the track is called “Ms. 45 Dance Party.” Third: there are musicians at the party ostensibly playing this, but instead of a saxophone they have a trumpet player. It’s not just in the background, either. The camera focuses on him while he pretends to play and does a little dance. I’m guessing this is the result of a low budget: that they couldn’t get a sax player on the day of the shoot, so they made do. But it’s actually a kind of eerie effect, and it calls attention to the music, making you intellectualize it instead of just, you know, grooving.

When she actually starts shooting up the party, though, this music goes away and we get some very horror-movie type processed sounds. I prefer the funk, thanks… but the “horror” music is just another sign that we’ve reached the part of the film where we’re supposed to realize that Thana, in doing battle with monsters, has become a monster herself. Like I said, the rape-revenge plot is pretty formulaic.

Oh, the second thing that redeems the movie? Right before the credits, the neighbor’s dog pops up again, none the worse for wear. See, audience, she didn’t kill it after all! You’re just an asshole for thinking that she did. And you’re also an asshole for buying into the rape-revenge rhetoric that demands that we view her as a monster. (Incidentally, this turns the stabbing into another instance of “awesome feminists choose their targets poorly”). Also reappearing, along with the dog? The “Ms. 45 Dance Party” song.

So yeah. On the whole, a mess. But it’s such an incredibly vigorous mess! The poster says “it will never happen again,” and it’s true: they really don’t make them like this any more.