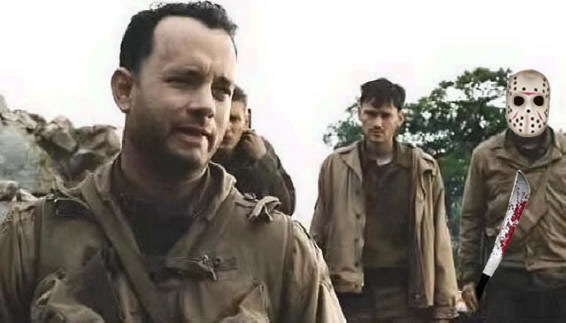 So I’m reading this film studies article by Linda Williams called “Film Bodies,” which explores the connection between horror films, pornography, and tear-jerkers. She actually makes a pretty persuasive case. Each genre shows us actors experiencing the things we as audience members are supposed to be experiencing (whether it’s terror, horniness, or grief), each displays an excess (of violence, of sex, of emotion), and each focuses on the body engaged in a kind of fit (death throes, orgasm, sobbing) accompanied by inarticulate vocalizations (“NOOO!” “YEEES!” “WAAAH!”) and the fetishized release of bodily fluids (blood, semen, tears). I was a little skeptical about the inclusion of tears in that last one until I remembered this scene from Garden State, which is an emo money shot if I ever saw one. (The salient part appears right at the start of the video*, after the jump.)

It kind of got me thinking. Aren’t there other film genres that focus on bodily fluids while making us identify with the protagonists? Take gross-out humor. In American Pie II, when Stifler drinks the urine, the audience laughs – but only because of they feel uncomfortable. What they actually feel is revulsion, similar to what the character presumably feels. Or how about the more grisly sort of war movie, as exemplified by, say, Saving Private Ryan?

And then it hit me. Saving Private Ryan is totally a slasher movie.

Think about it: what’s the basic outline of a slasher? You get a group of young people together, somehow isolate them from the people who are supposed to protect them (take them to summer camp, say), and then kill them off one by one in increasingly gory ways. As we learned from Scream, they are usually killed because they display some character “flaw,” be it stupidity, sexual curiosity, or being the black guy in a horror movie. Typically the last survivor is the most innocent girl, who at the climax of the film suddenly turns violent and kills off the slasher character.

So now take Saving Private Ryan. (Spoilers for a ten-year-old movie, coming up!) Leaving aside the brutal and exhilarating opening sequence, we basically have a group of young men wandering around and getting killed off, one by one. Gore effects are plentiful. Often, the victims are seen to “get themselves killed,” either by refusing to abandon a French child (Ah, Vin Diesel… too beautiful for this world, too miscast for this movie) or more directly by hanging on to a grenade for too long. Towards the end, the deaths get more dramatic and more disgusting. Adam Goldberg’s character is stabbed by a German officer in a scene that’s infinitely more disturbing and sexualized than anything I’ve seen in a slasher movie (the two men are rolling around on the floor when it happens, the camera lingers on the knife slowly penetrating Goldberg’s chest, and the German tenderly whispers “Shh! Shh!” as he stabs him). Most crucial is the character played by Jeremy Davies, Saving Private Ryan’s Final Girl. He’s an innocent: early in the film, he is horrified by the idea of killing German prisoners. He’s a survivor: despite his ineptitude, he manages to make it through the movie unscathed. And right at the end, he kills – murders, really – a surrendering German soldier to avenge the deaths of Goldberg and Tom Hanks. (This little war crime received a thunderous chorus of applause when I saw the film in theaters. It was… eerie.)

Obviously there’s some other stuff going on. Still, I think the similarities are pretty strong. So why is it that Saving Private Ryan wins five oscars, and a relatively sympathetic film critic claims that Hostel II is not worthy of a movie review because it’s not even really a movie?

Well, partially, it’s because most slasher movies are murder and nothing but, whereas Saving Private Ryan has all that “other stuff” I just alluded to. Mostly, it dilutes its gore with patriotic schmaltz, which, as any politician could tell you, is a cocktail that goes down easy. Also, even if you accept the proposition that Saving Private Ryan is a slasher movie, it would have to be one of the best slasher movies ever made in terms of the script, pacing, thematic relevance, cinematography, onscreen talent, and for that matter gore effects. Finally, there’s the matter of the killer. Slasher movies play on our fear of/fascination with things that we feel guilty about being afraid of: children (Halloween), dolls (Child’s Play), sleeping (Nightmare on Elm Street), urban legends (Urban Legend), hockey (Friday the 13th Part III), sexuality (basically all of them) and so on. In Saving Private Ryan, the slasher villain is war itself. Like any good monster, it’s a protean menace that keeps getting up again no matter how many times you think you’ve killed it. Like any good movie monster, it lends itself to sequels. But unlike most slasher villains, we can feel comfortable about finding it horrifying, and even a little proud about finding it fascinating.

* This is from a series of videos in which some fan has cut together a sort of reader’s digest condensed version of the film which functions as a sort of album-length music video to the Shins’ 2007 album, Wincing The Night Away. I quite enjoyed the movie, and I quite enjoy their music. But I’m not quite comfortable with the idea that anyone, anywhere, bought into the whole Garden State mindset quite this uncritically.