The Good Place is doing a Kierkegaard episode tonight! This is extremely exciting to me, first of all because Kierkegaard is one of the most interesting philosophers out there, and second because he seems highly highly relevant to the show’s basic project.

When The Good Place went on hiatus a few months ago, it left us on a cliffhanger. Sean’s back, and it looks like he’s auditing Michael’s neighborhood! In this episode, it turns out that Sean still thinks Michael’s plan is working, and he’s decided to fast-track Michael’s “psychological torture” neighborhood concept. Michael gets a promotion, to boot! Except this is maybe no longer what Michael wants — especially because they’re planning to throw Eleanor et. al. into regular hell. Michael has a plan to save everyone (or at least he seems to — this episode cuts off before it’s really revealed), but he can’t talk about it to anyone, because Sean is breathing down his neck. So he arranges a comedy roast for the humans, where he works clues about the plan into a series of elaborate insults. And the first clue (which actually comes a little earlier), is that he name-drops Kierkegaard. 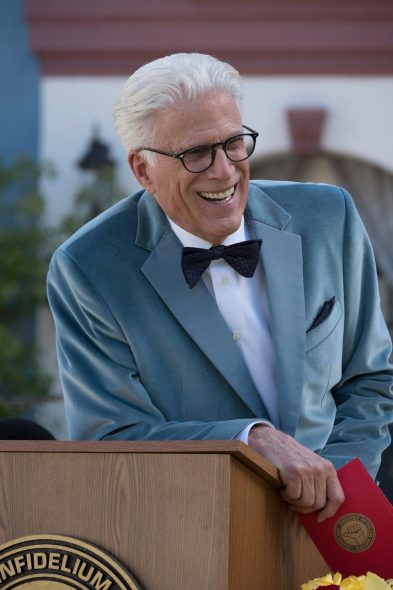 The central thing to know about Kierkegaard, if you’re going to know one thing about him, is his “teleological suspension of the ethical,” which you might remember from Chidi’s rap a couple of episodes back. The basic problem is a fairly old one in philosophy, which is that there’s a contradiction inherent in the concept of a God that is both all-powerful and absolutely good. If God is all-powerful, there is nothing that he cannot do. However, if God is all-good, then how can God do evil? You might say, “Well God can do anything that he wants to do, it’s just that an absolutely good God would never want to do evil.” But then a skeptic can say “It seems like God can’t even WANT to, say, steal a ham sandwich. Whereas I, a mere mortal, can want to steal all kinds of sandwiches. Am I more powerful than your so-called ‘God?’ Check-mate, theists!”

Another solution is to argue that freedom doesn’t mean quite what you think it means:  that wanting to do bad things is not being free, but actually being enslaved to your base desires. (I think this is the way that Plato gets out of the problem.) And another argument is the so-called “Divine Command theory,” in which goodness simply is whatever God wants it to be, meaning not only that God can want to steal a sandwich, but that if he did want it, it would become the right thing to do. But Kierkegaard’s solution is none of these. He says that God is sort of beyond ethics:  when it comes to God’s commands, ethics have to be set aside. (This is the “suspension of the ethical.”) So in the book of Genesis, when God tells Abraham, “Hey, go murder your son,” and Abraham tries to obey, Abraham is not being good as we generally understand it. It would be one thing, if Abraham said “well God wants me to kill my son, therefore it is right and just that my son should be killed.” That’s the divine command theory; that would be easy.

But as Kierkegaard tells it, Abraham expressly doesn’t believe this. He still believes that murder is bad… and yet God is God. So he takes a leap of faith (Actually it should be translated — ” “Shut up, Chidi!), and raises the knife to kill Isaac anyway. Kierkegaard is in a sense saying that if you only obey God because God tells you to do good things, then you aren’t really a Christian. 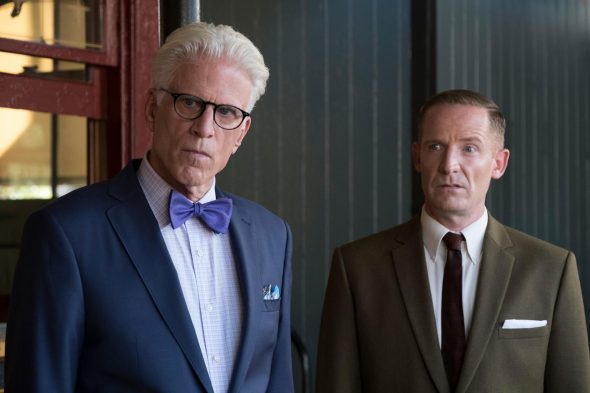 Is this relevant to the good place? Extremely so! As I’ve mentioned before in these recaps, the whole premise of The Good Place is that a bunch of people are trying to defy divine judgment. This episode only lightly touched on these issues — the closest it comes, I think, is the little throwaway exchange where Sean says that Vicki is not a demon, but a jerk. But I’m still really hoping they’ll grapple with it more. Is there a God in the good place universe? Or anything that we are supposed to trust as much as Kierkegaard wants us to trust God? Are we allowed to turn off our moral intuitions, replace them with blind faith — a purposely blind and helpless Faith, mind you — and trust in Providence?

For what it’s worth:  the leap of faith that the humans make in this episode doesn’t involve faith in god. It involves faith in one of their friends. Kierkegaard would maybe not approve — and yet, having faith in your friends is more like having faith in god then you might at first suppose. Because having faith in your friends doesn’t just mean rationally expecting them to treat you decently. That would be “a sit of doubting,” as Eleanor puts it. Having faith means expecting them to treat you decently even when this isn’t rational:  expecting that one friend who is never on time to show up on time just this once, and so on. Eleanor really shouldn’t trust Michael. He is a literal demon from hell (as Tahani points out), and has every reason to betray them. And yet, when she does make the leap — beautifully communicated by a static shot of two empty chairs sitting next to a coffee table, which makes sense if you pay attention to the “previously on” segment — doesn’t that seem, in a pretty significant way, to make her a better person? Food for thought, there. 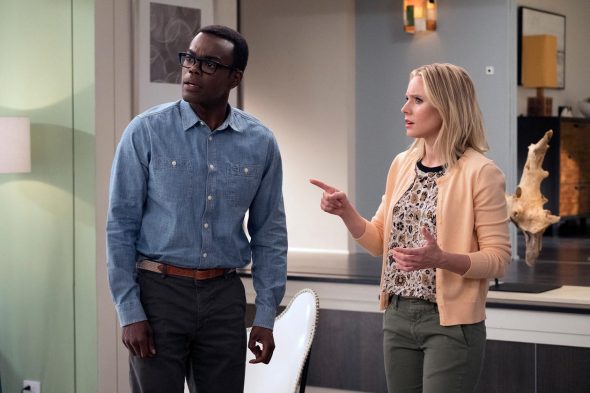 The other thing that makes Kierkegaard relevant is his way of writing philosophy. The Good Place very rarely tells you what to think. It brings up a lot of concepts from moral philosophy, but I really don’t think we’re meant to take any of them as The Answer. Rather, we’re supposed to weigh them against each other, and find some parts more convincing than others. Whatever sort of moral teaching you get from the show is going to come from the grappling with of all these different contradictory viewpoints…. And this was also Kierkegaard’s signature move. He didn’t release most of his books under the name Kierkegaard: instead they were written by Johannes this Silencio, or Simplicus Simplicius, or some other colorful pseudonym. You’re supposed be convinced by them only up to a point, but also to find them lacking:  there are big glaring holes in all of Kierkegaard’s philosophical systems (or at least Kierkegaard thought so). This leads to frustration, which leads you on to the next book, and the next, until eventually — disgusted with all philosophical systems — you take your own leap into faith, arriving at something kind of like an existentially considered religious orthodoxy.

This is also super-relevant to tonight’s The Good Place! In Michael’s roast, it’s the self-conscious mistakes that he makes that lead Eleanor to his secret plan. Of course, his reason for not speaking clearly is a little different from Kierkegaard’s, but it’s the same basic idea.

• Ted Danson is so consistently next-level on this show. The central set-piece of this episode is his comedy roast of the humans, which is notable for not actually containing any jokes. And yet I giggled straight through it, even though, thanks to the flashbacks, they ended up playing it for us twice.

• I’m just slightly worried that Showalter et. al. are forgetting how to write for Tahani. The running gag about her name-dropping celebrities hasn’t lost its charm yet (partially because the writers have managed to make them increasingly ridiculous — tonight’s Pippa Middleton and Russel Crowe gags were particular standouts — and partially because Jameela Jamil has been killing the delivery). But I felt like there was more going on with her character in the first season… perhaps Tahani, more than any of the other characters, worked better back when she thought of herself as good?

Jacksonville References:  The Jacksonville Jaguars, and how all they need is a defense and an offense and some rule changes.