We’re delivering our Game of Thrones recaps in a series we call Game of Thrones Unlocked. These articles will contain spoilers through the episode under discussion. This week, Jordan Stokes tackles “Stormborn” (Season 7, Episode 2).

It seems that we are well into the Endgame of Thrones. Everything that’s happened so far has been leading up to the climactic battles ahead. But soooo much has happened so far! And the show runners seem to assume (not without justification) that their audience might have lost the thread a bit.

Last week’s episode felt very much like a “getting the chess pieces onto the board” kind of episode: geographical bases of power were laid out, with Jon Snow in the North, Daenerys in the South, and Cersei in the middle. (As geography goes, this analysis is a bit crap—Dragonstone is East-Northeast of King’s Landing—but whatever.) None of these power bases is uncontested, but with the possible exception of Jon’s—Littlefinger is not to be counted out—none of them is seriously in doubt, either. I have a very hard time imagining a road to the finale that doesn’t involve these three leading their current armies into battle with each other.

But one is very slightly tempted to ask why we should care. Not just because the zombies present a more pressing threat, but because once we see all the cards on the table, it just doesn’t feel like it’s going to be much of a fight. Cersei vs. Jon might be a decently fair matchup, but it feels like Dany should be able to roll right over Cersei. And if Dany and Jon join forces, as seems nearly inevitable, then it just gets comical. Do we really need twelve more episodes for this? 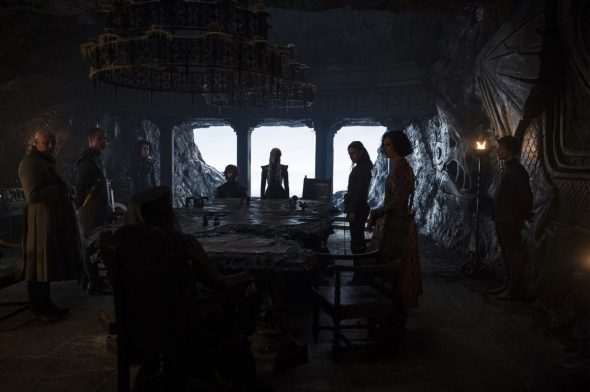 So if episode 1 was meant to set up the rest of the season logistically, episode 2 seems like an attempt to set up the rest of the season emotionally. Because there are reasons that we should care, after all. We’re reminded, by Randyll Tarly, that the Lannisters orchestrated the Red Wedding. We’re reminded—by both Olenna and Hot Pie—that they blew up Margaery Tyrell (along with a whole bunch of less interesting people). We’re also reminded, essentially by Lena Headey, that Cersei can project a blend of power, wickedness, and charisma that is oodles of fun to watch. Even if the outcome seems a little predetermined, do we want to see Cersei finally get what is coming to her? I mean: probably.

But the show runners didn’t leave it at that. They also invent a whole bunch of essentially new reasons for us to care about what’s going on.

Some of these involve trying to make the central contest more interesting. Over the past few seasons we saw Cersei kind of fall apart as a character. If you go back over her track record, she seems to be terrible, just terrible, at being in charge. She trusts the wrong people, empowers the wrong people, alienates the wrong people, and can generally be trusted to make the absolute worst decision as a reaction to any given crisis. This would make the coming battle even more lopsided. So this time we’re shown the confident, competent version of Cersei, saying basically all the right things to turn the Westerosi lords against Daenerys. (And may I say: thank goodness. Cersei’s so much more entertaining when she’s not holding the idiot ball.) 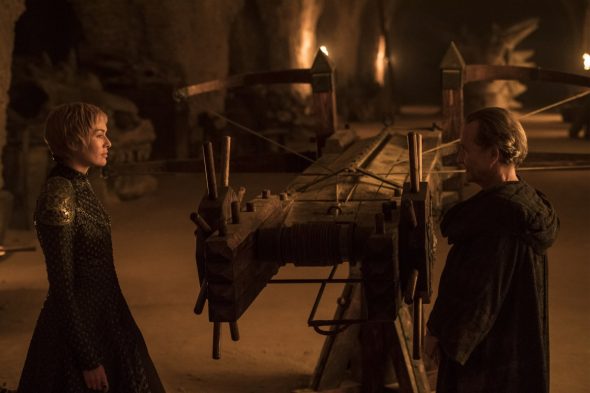 Hit me with your best shot.

But even if Cersei is bringing her A-game, the Unsullied are supposed to be quite simply the world’s greatest soldiers. How is that not game over right there? Well, we’re informed that Randyll Tarly, Sam’s castrating dick of a father, is on the Lannister’s side—and now he’s supposed to be the greatest general in Westeros for some reason. But Dany has her dragons: isn’t that still checkmate? No no, Qyburn tells us, we have a Top Secret Anti-Dragon Countermeasure. (Although I kind of wish this had turned out to be something more interesting than “a somewhat-larger-than-average crossbow.” Was anyone else hoping for Qyburn to fuse the dragon skeletons into an alchemically powered monstrosity of some kind?)

And some of it involves giving us new characters to care about. This is done pretty clumsily, for the most part. We were all relived when Ramsay Bolton finally ate it last season, right? Not just because we wanted to see him get killed, but because his grinning pyschopath act was getting kind of played out. So I am not super enthused about the show’s attempts to slot Euron Greyjoy into the Ramsay-shaped hole in its roster. (“Hmm, how can we make sure everyone knows this guy is evil: ah! Let’s have him brutally kill some women and then sexually menace some other women.” Can we just not, at this point?) But okay, Game of Thrones, having stuck with you this far I guess I will grudgingly agree to hate Euron’s guts. Fine. Fine.

I will also stipulate to feeling tenderly anxious concern over Missandei and Grey Worm, whose astonishingly character-grounded and non-pointless lovemaking in this episode basically set up one or both of them to get brutally killed at some point in the near future. For all that Game of Thrones has kind of a thing about killing off major characters, if it was really just down to Jon, Dany and Cersei, we’d have nothing left to worry about. But Grey Worm and Missandei are in that sweet spot: major enough characters that we’d care, minor enough that the narrative wouldn’t collapse in their absence. What was the line? “I did not know fear, until I met Missandei of the Isle of Naath.” Yeah, you and me both, buddy. 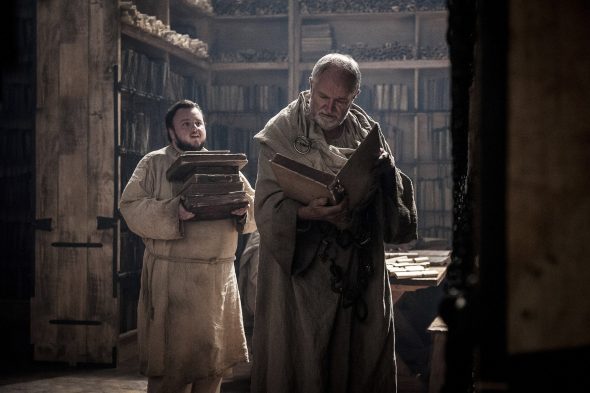 The best thesis defense is a good thesis offense.

But although you can kind of see the writers running around in the background greasing the plot machinery and powering up the heartstring-tuggers, this episode did the job that it was supposed to do. I feel a little manipulated, sure, but I do find that I care a lot more about the rest of this season than I did at this time last week.
I do want to talk about one more thing here: Samwell Tarly, who seems to be starring in a delightful little sitcom all of his own about how bad it must have sucked to go to Med school in the high middle ages. Ye Olde Scrubs, or something like that. (Tag us on social media if you think that Ye Olde Scrubs is a much better idea for a show than Confederate.) Sam has had bugger-all to do with anything that’s happening in the rest of the plot. But his scenes in both of the episodes stand out so much! They’re so gross, why would you put all that pus and poop and blood and grimacing into scenes that have so little meaning?

I think the show has kind of painted itself into a corner with Sam and Jorah, two characters who evidently have roles to play in the endgame (or they’d simply have vanished), but who have been sent on missions that can’t really have any bearing on the rest of the plot. If Jorah just popped up in Daenerys’s throne room one day, and was like “Hey I cured my Greyscale, would you believe witch hazel?” this wouldn’t satisfy us. Right? And although I don’t think it would be quite as much of a problem, there’d be something a little off-putting about a scene where Sam just show up at the Wall wearing a Maester’s chain three episodes from the end, full of stories about how drunk he got at the Freshman Formal. These characters are both supposed to be going on quests. They are transforming themselves. And transformation takes, well, pus and poop and blood and grimacing (or rather, it takes effort and risk, which is what all of that stuff is basically standing in for). In as condensed a timeframe as possible, the show is trying to sell us on the idea that Sam’s education and Jorah’s cure are victories that have been won, not simply nice things that happened to happen. Once again, the show is giving us reasons to care.

Now, there is a whole separate discussion to be had about that Arya scene with the direwolf. I won’t be touching that in this post — maybe I’ll write a follow-up later this week, or maybe we can hash it out in the comments.

There is not really a discussion to be had about the Evaded Title Drop that the show served up with “A History of the Wars Following the Death of King Robert the First.” But yes, writers, we do see what you did there. Good job, have a biscuit.