Horror Worth Watching: The VVitch.

This is a post in a continuing series, believe it or not: the first entry was years ago, this is the second.

Even for a horror film, The VVitch tends to provoke some strong reactions. This shouldn’t be surprising: love it or hate it, it’s hard to deny that it’s one of the most singular films ever produced in the genre. David Ehrlich, writing for Slate, praised its “savage grace and conviction.” I would tend to agree. Others have argued that it’s boring and morally dissonant. I would also tend to agree. Well, not boring, exactly… but sloooow. I am 100% in the tank for this movie, so I kind of want to claim that this was intentional and necessary for the tone that director Robert Eggers wanted to strike, because you need to experience the grinding isolation of the characters? And that if you approach it with the eye of a cineaste, there’s enough raw talent on display in the cinematography, the costuming, the script, the performances, the score (God that score!), etc., that you can be thoroughly entertained all the way through? That it’s only slow in the sense that going to an art gallery is slow? 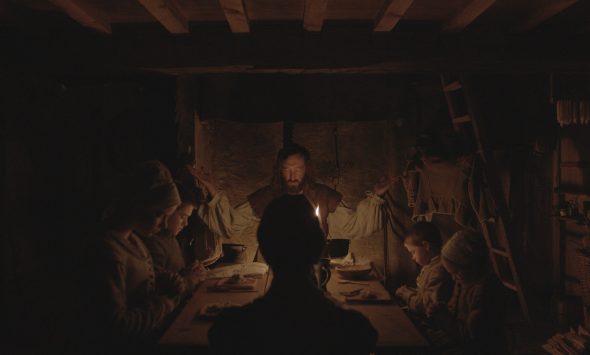 But even as I type these excuses, they feel weaksauce, and I know that if I wasn’t already, as stated, 100% in the tank for this movie, I would be rolling my eyes. “Oh, this scene is supposed to drag on like this? Oh, you just have to watch it with an eye to its higher cinematic virtues?” (You’re supposed to read that whole passage like you’re making fun of William F. Buckley, but the last three words should be so distorted with snobvoice that they’re nearly incomprehensible.) Yeah, okay, maybe all of that is true, and certainly you will have a much better time with this if you’re like “okay, this is Artistic, I am Paying Attention to the Cinematography.” But let’s not forget that it was Eggers’s first film. Maybe the pacing just wasn’t that great.

The moral dissonance, though… It’s definitely a morally dissonant film. And that’s the main reason that I liked it. 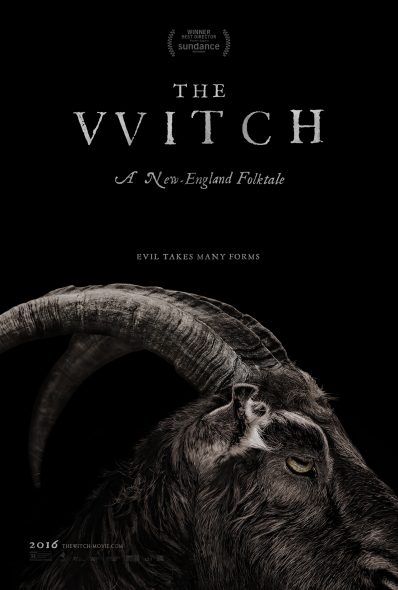 If you haven’t heard of The VVitch, the elevator pitch is basically “The Crucible, except the witches are real and they murder everyone.” There’s a family of isolated Puritans living on this farm in the woods. Right at the start, a witch shows up and steals their baby. Gradually, she corrupts and/or murders the rest of the family too.

Now, this could have been just a fun dumb slasher film in period dress. (For the record, I would have been on board with that.) But Eggers isn’t much interested in the traditional pleasures of horror. There’s no chase scenes. Not a lot of gore, by modern standards. Because so much of the film is spent on the joyless trials of frontier life, each little dash of violence that you do get hits like a ton of bricks. And some of these would probably hit pretty hard in any context. (The baby! The raven!) But my adrenal gland didn’t get much of a workout at this movie.

Again, this feels intentional. What makes the film really special and distinctive are the scenes that manage to be scary without being the least bit exciting: scenes that are basically frightening because of their ideological content. Here’s one from early in the film. The baby, Sam, has just been stolen and killed by the titular VVitch. His family thinks he was eaten by a wolf. The father (William) and the oldest son (Caleb) have this exchange:

Caleb: Was Samuel born a sinner? How might then —
William: We pray he hath entered God’s Kingdom.
Caleb: What wickedness hath he done?
William: Place faith in God, Caleb. We’ll speak no more on thy brother.
Caleb: Why? He hath disappeared not one week past, yet you and Mother utter not his name.
William: He is gone, Caleb.
Caleb: Tell me.
William: Tell thee what?
Caleb: Is he in hell?
William: Caleb!
Caleb: Mother will not stop her prayer… And if he died! If I died this day?!
William: What is this.
Caleb: I hold evil in my heart. My sins are not pardoned.
William: Thou art youngly yet.
Caleb: An if god will not hear my prayers?
William: Caleb…
Caleb: Tell me!

The father stops what he’s doing and walks over to his son. He looks him in the eye, and gently, lovingly, sorrowfully delivers this line, which even now scares the bejeezus out of me.

William: Look, you: I love thee marvelous well. But tis God alone, not man, what knows who is a son of Abraham and who is not. Who is good and who is evil. Fain would I tell thee Sam sleeps in Jesus. That thou wilt, that I will. But I cannot tell thee that. None can.

The dad doesn’t come off as a frothing idiot, mind you, or a bible-thumping ogre. He’s being as gentle as he knows how to be, trying to tell his son an awful truth that he knows full well to be awful. He’s basically a good guy. A good father. This makes it SO much worse. 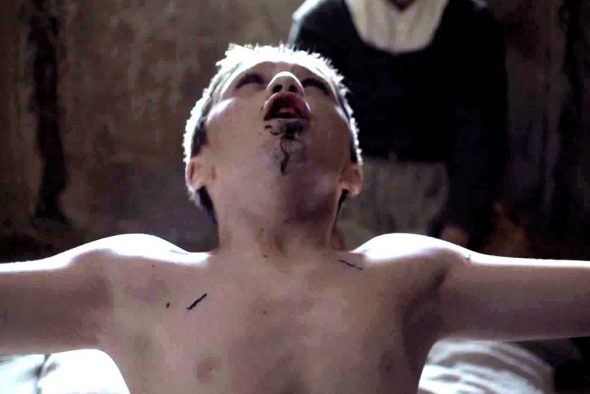 Caleb: Wholly thine I am, my sweet Lord Jesus. My Lord, my love! Kiss me with the kisses of thy mouth. How lovely art thou! Thy embrace! My Lord! My Lord! My Love! My soul’s salvation, take me to thy lap!

And then he dies, and the light fades. It’s a miracle, sort of? And a child dying in agony. And then a few scenes later, William and Katherine (the mother) bitterly remind each other that there is no guarantee that Caleb is not also in hell just because he died crying Jesus. After all, the Devil can cite scripture to his purpose — and they know that Caleb has fornicated with an agent of Hell, which isn’t exactly a good sign.

And if this wasn’t bad enough, there’s what happens to Katherine. Would you like to know, reader? Are you curious to learn how Katherine gets lured away from the side of the angels? Are you sure?

So, she has a dream, in which her dead children, Caleb and Sam, appear to her. Naturally she’s overjoyed…

Katherine: My lambs. My angels!
Caleb: Mother. We have longed to see you so.
Katherine: As I to thee! I must wake thy father! He will be so glad.
Caleb: No, let him sleep. We would see you oft, mother. Would that please you?
Katherine: Aye.
Caleb: I have brought a book for you, mother. Will you look at it with me? [He brandishes a satanic manuscript.]

And then she picks up the baby to nurse him — the ghost baby? Demonic figment baby? Damned-soul baby? — and then it cuts to the FREAKING raven scene, and everyone in the theater pretty much loses their minds. But even scarier than the raven, to me, is the idea that Katherine is damned to hell for loving her children. (Not to mention that it’s quite possible to read this scene as a confirmation that the worst has come to pass, i.e. that Caleb and Sam are already rotting in hell, and what’s more actively recruiting.)

A lot of what makes The VVitch horrific, then, is the stuff that the characters say and believe. But none of this is the characters’ fault. Yes, the parents strike us as zealots. Yes, their spare-the-rod, spoil-the-child, burn-the-witch schtick strikes us as, from our point of view, objectionable. But why should our point of view matter here? As Mallory Ortberg wrote on Twitter, “YOU CAN’T HAVE IT BOTH WAYS, THE VVITCH! You can’t JUDGE THEM for being FANATICS and also say ‘oh witches are real, in league with the actual devil, and will kill your children.’” But I’m not judging them for being fanatics! And I’m not convinced that the film does either.

Here it becomes important that The VVitch’s dialogue is basically just “Stuff said by actual Puritans:  the remix.” At the heart of it, The VVitch turns out to be a sustained experiential attack on Calvinist theology. (And may I say:  what a gloriously weird thing for a movie to be.) Look, there’s no getting around this:  Calvinism is… uncompromising. If you take the belief system seriously at all, it has unsettling implications. In practice, some of these are softened (or finagled), but The VVitch takes the opposite tack:  it imagines the direst, most conflicted version of that moral universe that it possibly can, and then, rather than mocking it from the outside (which is what the notional “muuh, these Puritans are bigots!” film would be doing), it invites you inside, asking you to imagine what it must have been like to believe all of this.

On the inside — in a world where this stuff is actually happening — you can’t criticize the characters for being fanatics. You can’t even call them fanatics! They’re watching it all unfold before their very eyes:  do you think of yourself as a fanatical believer in gravity? Within the world of the film, these people are 100% correct. They’re doing their best to follow the rules of the awful game that they’ve been dealt into.

Who wrote the rules of this game, though?

So no, the Puritans in this movie are not villains. But their God is an absolute monster. That’s where The VVitch is coming from. It’s bible-believing Christianity as Lovecraftian cosmic horror. Jehovah, here, is Cthulhu: inscrutable, callous, vastly dangerous, and mostly absent. People who worship him end up doing some things that are, by any user-friendly ethical standard, monstrous. And yet these monstrous acts — these monstrous principles — are FOR SURE the best option that anyone has, because Satan is real, and the stuff he wants you to do is infinitely worse. Wrap your head around that. Try to believe all of these things. Actually feel what it feels like, to actually think all of that. Will you now tell me that this is less horrific than the Saw franchise?

The VVitch isn’t a fair attack on Calvinism, mind you. Nor is it really a convincing/effective attack:  for the horror of the situation to affect your real-world beliefs, you’d kind of have to actually buy into all of the film’s metaphysical propositions. Like, if anyone really believed in this exact distorted version of Calvinism, The VVitch would probably make them feel really bad… but that’s all, and if this were your theology you’d probably be used to feeling bad all the time to begin with. But I don’t think the film is trying to turn people away from Calvinism. It’s not a religious film in that sense. Rather, it’s going for intensity of experience. At the end of the day, it’s still a horror film:  it just wants to scare you. And if you can accept these principles as fictionally true — true for The VVitch in the sense that “the force has a light side and a dark side” is true for Star Wars — then this is potent horror indeed.

6 Comments on “Horror Worth Watching: The VVitch”