On a surface level, Hotline Bling is about slut-shaming. The song is pretty covert and low-key about it, but it’s not particularly ambiguous. Drake’s upset because his ex-girlfriend has been screwing around… or at least that’s the image that emerges from the song as a whole. Actually, what HAS Drake’s ex been doing? It’s not at all clear that she’s been engaging in any of the classic slut behaviors. Not that that would make it okay! Shaming people who are actually promiscuous is still a total dick move. Still, when we consider the specific charges that Drake levels against this particular girl, it serves as a useful reminder that — in point of actual fact — most girls who get slut-shamed are just convenient targets, and are NOT particularly sexual. Let’s consider some of the highlights:

• You got a reputation for yourself now

THAT IS AN EFFECTIVELY MEANINGLESS CHARGE, DRAKE!

“You’ve got a reputation” is one of those criticisms that seems like it’s a statement about you, but is actually a statement about someone else, in this case, the people who are talking about you. I’m not going to go so far as to say that reputations are never useful heuristics — sometimes when there’s smoke there’s fire — but this particular kind of reputation (i.e. that a young woman is sexually reckless) is notoriously unreliable.

Quick note:  when I said that the song is covert about it’s slut shaming, this is the kind of line I was talking about. You’ve got a reputation… for what? For making the juiciest porkchops? For bringing in projects on time and under budget? Hell, a reputation for scrupulous chastity is still a reputation. And yet we instantly know what kind of reputation he’s really talking about.

• You started wearing less and going out more

Credit where due:  as a line of poetry, this is pretty great. But when we put it together with a line from a little later in the song —

• Hanging with some girls I never seen before

— an image begins to clarify. We’re looking at someone who used to be really introverted, wearing bulky clothing, staying home on the weekends, and rarely socializing outside of a close-knit group of friends. And what’s happened? She’s started opening up, making new friends, dressing more fashionably, and gradually building a social life. Drake is walking into the third act of She’s All That and screaming “Put the glasses back on, you irredeemable WHORE!”

Leaving the kinky pyschosexual power dynamics of that particular movie aside, this blossoming process is something that most introverts eventually go through. I went through it myself a few decades back, and I tend to think of it as the period during which I grew the hell up. Moving on:

• [You started drinking] glasses of champagne out on the dance floor

Again, this is kind of a cool and evocative line. It’s so elemental. But when we put it together from this line from the bridge —

— the dynamic that’s revealed is pretty toxic. Drake doesn’t think she should be going anywhere. He wants her cloistered, closeted, hidden away in a box somewhere. And note that we’re not even TALKING about sex anymore. Her crime was leaving her house.

• You and me we just don’t get along

OMG, what a prostitute. 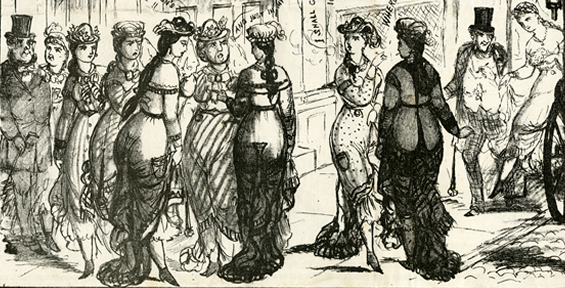 Detail from a political cartoon, c. 1878:  by showing their ankles, these women advertise to passers-by that they do not get along with Drake.

Again, it’s not so much that Drake is doing slut-shaming wrong here.  It’s that the song reveals the way that slut-shaming actually operates. And note that the only lines that refer directly to sex are cast as speculations:  he wonders if she’s bending over backwards and/or getting nasty for someone else. I more than half suspect that Drake is doing this on purpose, and that the song, if not quite a critique of slut-shaming, is a self-conscious attempt to capture the emotional experience of a shamer, warts and all.

Still, this isn’t a great look for him. Drake’s just lucky that this beat — a luscious, chilled out remix of the Star Road music from Super Mario World — is fire.* (Also, Drake’s just lucky he has those eyes and those lips.) (And that his voice sounds like that.) Okay, let’s just stipulate that Drake is lucky in several ways, many of which have to do with him being talented. But my point — my point — is that the slut-shaming part of the song is pretty unlovely.

There’s another thing that the song is about, though, which is more subtle and more interesting. And, whereas the lines we talked about before were from the verses and the bridge, this comes from the hook — i.e. the part that people actually know and sing along to. You could make the case that this part is primarily what the song is about.

Let me ask you this:  when was the last time you referred to your cell phone as a cell phone?

We mostly just call them our phones, right? If I’m trying to be cute I might call it my cell or my cellie. But cellphone? Just imagine using that phrase in everyday conversation. Now imagine saying it with the same stress that Drake uses in the song:  “You used to call me on my CELL-phone…” The compound, cellular phone, exists to distinguish the cell phone from other types of phone. The syllable stress makes it clearer:  she called him on his cell phone, as opposed to something else. But why are you bothering to specify that the cell phone is what you use to set up a booty call? Should she just be shouting out the window?

“What?! Keep your voice down, woman! It’s late at night!”

Or calling on some other kind of phone?

She used to call me at my work phone/

at 2PM when she would neeeed myyyy love/

Baby, this is the middle of my shift/

I cannot afford to lose this job/

Now, there was a time when we did call our cell phones cell phones, which is back when we first got cell phones:  i.e., back when we also had landlines that we actually used. Drake’s 29 years old. I don’t know exactly when they started building cell towers in Toronto, but we’re looking at, probably, somewhere around his last couple of years of high school? 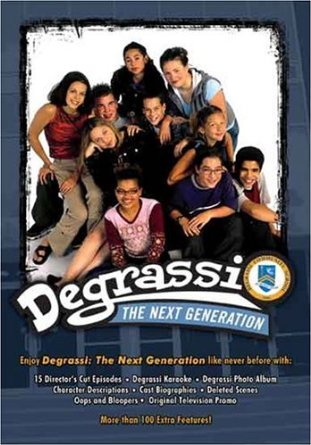 So this is the other thing that Hotline Bling is about:  nostalgia. It’s about yearning for a simpler time, a time when cell phones were exciting new technology, when your parents mostly took care of your physical needs, and the girl next door was just the girl next door. And this feeds back into the other aspects of the song, both the 16-bit R&B of its beat, and even the slut-shaming aspect. It’s nostalgia that explains why so many of the things that Drake is complaining about are less about promiscuity and more about self-actualization. He wants her to go back to being a good girl. Grown woman that she is (that she’s become), there’s no way for her to live up to his expectations.

* To the extent that something this mellow can really be said to be fire. This beat is fiiiiyaaah-that-I-want-to-curl-up-in-front-of-in-a-blanket-toasting-marshmellows.